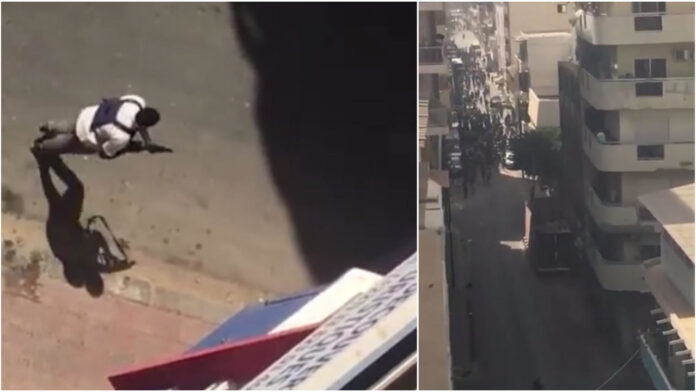 Pictures published online on March 6 show two men in civilian clothes chasing a group of protesters in central Dakar, Senegal, and shooting at them with live ammunition. The incident took place the day before. Widespread protests have swept across Senegal after opposition politician Ousmane Sonko was arrested on March 3.

The video, which is 1 minute and 37 seconds long, was filmed on the corner of Galandou Diouf Street and Dr Thèze Street in the Plateau district of the capital. Although this video first appeared online on March 6, our team contacted a store owner working on the same street, who said that the incident actually took place the day before – early afternoon on March 5.

Sometimes old photos appear online and people suspect it of recent events. However, some of the protesters in the film wore masks, which is another indication that the video was filmed recently – at least during the pandemic, our colleagues pointed out in the French newspaper Jeune Afrique. Official reports published on March 7 show that four people died during these protests.

Who were these armed men?

The video shows two men wearing civilian clothes. One carries a shotgun, while the other carries a rifle. The man with the shotgun, who is wearing a dark blue jacket, fires at least four shots at the level of a human. At 10 seconds in, a cartridge falls to the ground after a shot has been fired.

To the left, a man in a blue vest looks like a pump and, to the right, another white t-shirt looks like a short-sleeved shot. This HK-G36 type model can only carry real ammunition. © France 24 / Facebook

According to a ballistics expert who spoke to our team, the shotgun could have been used to fire either real bullets or rubber bullets. However, the assault rifle worn by the other man, wearing a white T-shirt and a bulletproof vest, is only used to fire live ammunition. The pistol is probably a HK-G36, used by the Senegalese army. At 40 seconds, you can see this man shoot twice. The first time he shoots at human height, the second time he shoots on the ground.

‘Police should not intervene and shoot at the audience’

Several media outlets and organizations reported that “nerves” had infiltrated the protesters. Nervis refers to civilians armed with batons who work together with the police – like rented books. During the protest, these men were observed beating protesters. The two gunmen in the video look more like police officers in civilian clothes, according to Sadikh Niass, secretary general of an organization called Rencontre africaine pour la défense des droits de l’Homme (or Radhho). The name roughly translates to “African meeting for the defense of human rights”.

We noticed two groups of people at these protests, “nervis”, who were armed with batons and working with the police, and armed men who took advantage of the chaos to loot. But the men in the video are probably policemen in civilian clothes, as the Minister of the Interior himself confirmed that there were secret police during the protests.

I think these undercover cops should not carry weapons because their theory in theory is to be discreet in identifying protesters. They should not intervene and shoot at protesters. As I said, we cannot rule out the possibility that the police have recruited armed militias. All these possibilities are worrying and we demand the immediate initiation of an investigation to highlight these incidents.

On Tuesday, March 9, the Movement to Defend Democracy (M2D), the organization that coordinated the protests, announced a “pause” in the movement after opposition politician Ousmane Sonko was released and President Macky Sall demanded calm.