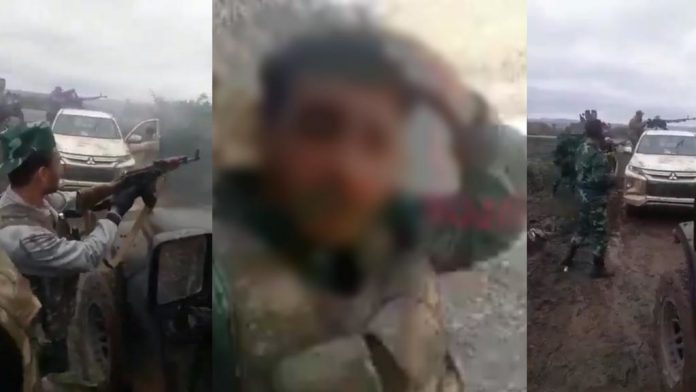 According to the Syrian Observatory for Human Rights (SOHR), at least on October 18, at least 134 Syrian mercenaries had been killed in Azerbaijan; 92 corpses have returned home. SOHR also claims that at least 2,050 fighters were transported from Syria since the beginning of the armed conflict in groups of 400 at a time. JowharObservers were unable to independently verify these allegations or speak with a Syrian fighter.

According to the British newspaper The Independent, which spoke to Syrian fighters who went to Azerbaijan, recruitment began in July, at the start of tensions between Azerbaijan and Armenia. The warriors were promised a sum of money between US $ 1,200 dollars (about € 1,000) and US $ 1,500 dollars (about € 1,250): a significant wage in a country where an estimated 83 percent of the population lives below the poverty line, according to a United States report Nations 2019.

Fanny Alarcon covers the Middle East for the security and intelligence publication Intelligence Online. She explains:

It has almost become normal for Turkey to reuse its fighters in armed conflicts. They do not cost much money, they are already trained: it is easy work.

These troops need pay and know how to fight. Turkey officially became involved in the conflict in northeastern Syria in 2017, 2018 and 2019. In each situation, Turkey did not want to bring its own army over and instead used Syrian fighters, who could then be reused as henchmen against autonomous Kurdish authorities.

In the Nagorno-Karabakh conflict, they do not openly support the conflict, as they did in Libya or northern Syria. It is not in the interest of the Azeri and Turkish authorities to use Syrian mercenaries: it does not reflect well on them, especially when these Syrian soldiers are filming themselves.

This video, released on October 12, shows Syrian fighters at the front line in Nagorno-Karabakh. ‘Go ahead (…). We need more ammunition! Allah is great!’ shouts one of the mercenaries to the other soldiers.

Alarcon says the different factions of the Syrian national army have different ideological allegiances. Each of these groups has an attitude: they are not jihadists. Turkey does not employ such people. They are factions formed at the beginning of the conflict that come from northwestern Syria, especially from Aleppo. They consider themselves part of the free Syrian army, which at the time of the Syrian civil war was a moderate rebel force against the Syrian regime and supported by countries such as France and the United States. When the Syrian national army was formed by Turkey in 2017 to rally rebels, there was no ideological dimension anymore.

Ultimately, the motivating factor for Syrian mercenaries is getting paid, having a job and a salary. Some of them do not look like what they are doing on the battlefield. Others are just mercenaries and their job is to fight.

Video of a Syrian mercenary in Azerbaijan talking about the heavy shelling carried out by Armenian forces. I reached his cousin. The fighter is Mustafa Qanti, 23 years old. He was recruited to travel to Libya by Hamza Division, a Turkish-backed faction. pic.twitter.com/tHdzljm02X

This young mercenary, identified by researcher Elizabeth Tsurkov as Mustapha Qanti, 23, filmed this video in the front line. He had been recruited by the Hamza division, originally to go and fight in Libya. In the video, he clearly says scared: ‘God, be merciful! Shards – come down! ‘

Mustafa, the Syrian Hamza division fighter, is back with yet another video. “God is great. The war spoils Armenia,” he repeatedly declares. pic.twitter.com/oLPQZI7hnP

This is another video of Mustapha Qanti showing him finding ammunition left by Armenian soldiers. Internet users identified the location of the video near the border town of Horadiz.

‘By 2020, there will be no factions that do not use religious language; it’s a given ‘

Other videos coming out of Syria show sheikhs or leaders of various factions trying to recruit Syrians in cities in northwestern Syria, a region that has been particularly affected by extreme poverty and war. This video was verified by local media Afrin Post. It was filmed in Shayk al-Hadid, a city in the province of Aleppo near the border with Turkey. In it, a man urges the spectators around him to sign up to fight: “Our battle in Azerbaijan is the same battle as in the Levant. It is your duty to fight in Libya and Azerbaijan ”.

Alarcon continues: The recruitment of soldiers takes place through the Turkish intelligence service, which forms the Syrian national army and selects faction leaders to bring them to Turkey and Armenia [as this article by Step News Agency shows]. It all happens through the official state-run department and not through private companies like the Russian company Wagner, which recruited mercenaries for conflicts in the Central African Republic or in Venezuela. [Mondafrique recently published an article on this]. Religious language has been much more present among Syrians since 2011. Radicalism has grown and is a central facet of the Syrian rebel forces.

By 2020, there are no factions that do not use religious language; it is a given. The most radical groups in the Syrian rebel forces, such as Ahrar al-Sham or the former Al-Nusra Front, have become very powerful during the civil war and have pushed other factions, such as the mercenaries employed by Turkey, to adopt it. same language.

Yerevan said on October 25 that its total military death toll had risen to 963 deaths. Azerbaijan does not disclose its military losses, but said 65 civilians have died so far. It is estimated that half the population of the disputed Nagorno-Karabakh region has been displaced by the clashes.

This article is written by Fatma Ben Hamad. Elena Gabrielan (RFI) contributed reporting to it.