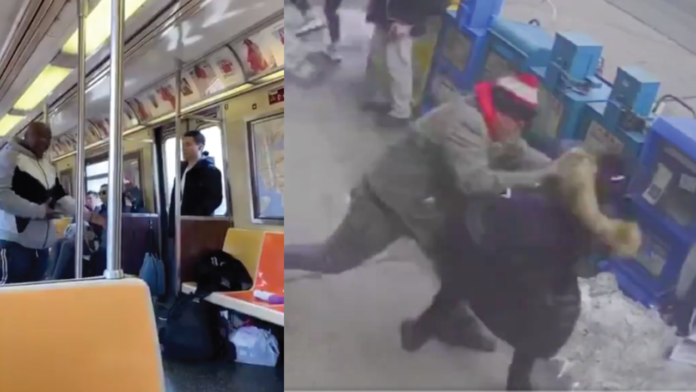 Videos of Asian Americans, mostly seniors, being violently shot to the ground and robbed in unprovoked attacks in California and New York in recent months have aroused fear and outrage among the Asian community in the United States. The videos coincide with a worrying increase in anti-Asian violence and racism since the Covid-19 pandemic began, with anti-Asian hate crimes increasing by almost 150 percent by 2020, although the overall rate of hate crimes decreased in America’s major cities.

Attack happened in Flushing, Queens. Across the country, there has been a disturbing increase in violence against the Asian American community. The victim’s son: “I’m sure this will not be the only one or the last. Keep your eyes open, keep your families safe. ”Pic.twitter.com/IadovxkYDU

A surveillance video from Queens, New York City on February 16, 2021 shows that a 52-year-old Asian woman was attacked by a man who threw a box at her and drove her to the ground and knocked her unconscious.

‘We get pushed and shoved, coughed and spat at, throwing stones and bottles at us’

To understand the latest wave of anti-Asian attacks and hate crimes, the JowharObservers team spoke with Russell Jeung, chair of San Francisco State University’s Asian American Studies Department and leader of Stop AAPI Hate, an initiative that tracks violence and harassment against Asians. Americans and Pacific Islanders in the United States.

We began collecting personal, first-hand accounts of anti-Asian racism in March 2020. To date, we have received more than 3,000 incidents from all 50 states.

In these reports, we see four main categories of discrimination: assault in the workplace, cyberbullying, verbal harassment and physical abuse. We are pushed and shoved, stones and bottles are thrown at us, coughing and spitting on us. My family has also experienced this: my wife was out running when someone deliberately blocked her way and coughed in her face. This would not have happened before the pandemic.

A Twitter video filmed on a subway train in New York on March 5, 2020 – around the time the pandemic reached New York – shows a man shouting at an Asian passenger to move away from him. The man then sprays the passenger with an air freshener.

Our data also show that vulnerable populations – young people and the elderly – are disproportionately affected, as are women. The attacks on the elderly that we have seen are so painful, because Asian Americans really respect our elders.

A surveillance video from San Francisco on January 28, 2021 shows a man violently shooting Vichar Ratanapakdee, an 84-year-old Thai man, to the ground during his morning hike. He died of the attack.

Nearly a third of Asian Americans said they had been subjected to racist repetition or jokes since the beginning of the coronavirus outbreak, while 26 percent said they feared threats and physical attacks, according to a Pew survey conducted in June 2020.

‘In times of war, economic decline and epidemic, Asians are framed as outsiders to be excluded or detained’

President Trump encouraged hatred more by using terms such as “Chinese virus” and “royal flu” over and over again and stigmatizing the Chinese.

However, there is another underlying factor for hatred: violence against Asian Americans has always been a part of American history. There was a “yellow danger” fear that Asians would come and invade, bring their diseases, and take away jobs, as evidenced by the Chinese Exclusion Act of 1882. During World War II, Japanese Americans were sent to concentration camps. After 9/11, South Asians were detained and deported. We know that Asians, historically, in times of war, economic decline, and epidemic, are framed as outsiders to be excluded or detained.

‘Not all crimes are necessarily racially motivated, some are more possible crimes’

Although the figures indicate that anti-Asian violence and hatred have increased during the pandemic, many of the events captured on video, which include appropriate violence but also robbery, give no clear indication of whether the violence is driven by exaggeration or other motives. related to petty crime or even mental illness.

According to Dr. Jeung, to label all recent violence against Asians as “hate crimes” also diagnoses a more nuanced problem.

We have seen two distinct trends that are related: reports of anti-Asian hatred that are clearly racist, as well as a series of violent crimes against Asian Americans. The racism from last year has portrayed Asian Americans as foreigners who do not belong, so we are more likely to be shot and shot. But some of the crimes are not necessarily racially motivated – rather they are possible crimes, which may be committed by people with mental health.

Surveillance footage from January 31, 2021 shows Yahya Muslim, a 28-year-old homeless man, shooting a 91-year-old senior in Oakin’s Chinatown neighborhood, a town 13 km from San Francisco. Oaklandside, a local newspaper, reviewed the Muslim court records and found that although he had a history of crime and assault, there was no clear evidence that his attacks were motivated by racial prejudice.

A surveillance video from January 30 shows people trying to steal plants from an Asian-owned flower shop in Oakland’s Chinatown. After the employees confront the thieves, a car parked in front of the store zooms away and almost drives over the employees.

‘People can go into battle or flight mode. But when we feel fear and anxiety, flocking is the most constructive thing to do ‘

Although these events have frightened and upset Asian Americans, Dr. Jeung feels encouraged by how people from all walks of life have responded to the attacks.

Despite my grief, I am encouraged by the people who support society, not just Asian Americans but our allies. People can go into battle or flight mode: patrol, arm themselves, tell their families to stay indoors. But the second answer is to flock. And I see society flowing together, people who stand up to resist racism and take care of our elders.

A TikTok video shows a protest on February 20, 2021 in New York City condemning recent violence and crimes against Asian Americans and supporting society.

Orange western patrol out in #Oakland Chinatown. They make progress with society – people stop them on the streets to chat and merchants are well acquainted with them. One volunteer put it: “Chinese elders who protect Chinese elders.” pic.twitter.com/EMJ1aJw9uw

A Twitter video on March 7, 2021 shows a group of orange-woven volunteers calmly patrolling Oakland’s Chinatown, where hundreds of people have signed up to escort elderly Asian Americans and lend a helping hand to community members.

During a first speech to the nation on March 11, 2021, President Joe Biden condemned the “evil hate crimes” against Asian Americans during the pandemic and called on them to stop immediately.