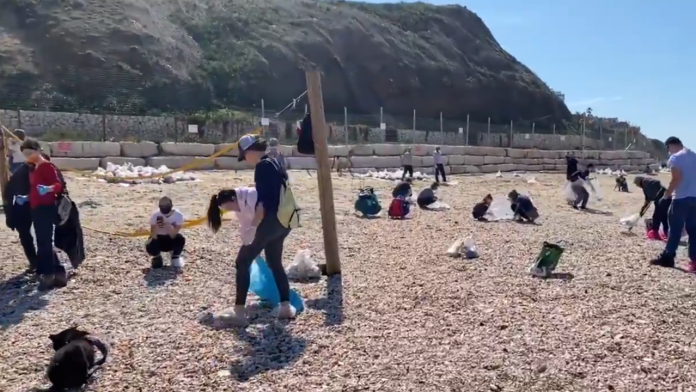 A large number of volunteers have been working since February 19 to clean up the tar that covers the shores of southern Israel after an oil spill from an unidentified ship. Several NGOs have said it is the biggest ecological disaster to hit the country in decades.

From black beaches to lifeless turtles, a large number of images showing the devastation caused by the oil spill from Israel’s Mediterranean beaches have circulated on Twitter.

A still unidentified ship spilled large amounts of oil in the Mediterranean on 11 February, causing a serious threat to marine life. But it was not until people found the rotting body of a fine whale and tar on one of Israel’s shores that they realized what had happened.

The oil has tarred over 170 km of beaches, representing 40% of Israel’s coast, according to Haaretz, one of the country’s most prominent dailies. Tar has been seen everywhere from the town of Rosh Hanikra in the north all the way to Ashkelon, which is near the Gaza Strip. The Nitzanim Nature Reserve has been affected. It is the worst ecological disaster to hit Israel in decades.

‘The damage to the Israeli coast is really serious’

Thousands of volunteers, including Bar Peleg, a journalist at Haaretz, have been mobilized to help clean the beaches to the best of their ability.

Dozens of animals, sea turtles, seagulls, crabs and so many others die every day.

The damage to the Israeli coast is really serious. In some places there are large amounts of oil. Elsewhere, there are small pieces of tar that look like sand or small rocks. This makes decontamination extremely difficult.

A guide for a group of volunteers who arrived at Givat Aliya beach in Tel Aviv. The person in charge of the briefing, Inbar Margolis, organized the cleaning day today together with “Plastic Fruit of Israel”. Everyone on the way to the beach puts on the shoes plastic bags (reused) and insulating tape. The response is impressive and exciting, the event was organized by Mol LaYom by citizens pic.twitter.com/IjvBtOtolW

There is a huge mobilization here. Hundreds of people gather every day to clean the beaches – ordinary people, soldiers, police and government workers. I went to Poleg Beach near the city of Netanya to help. There will be even more people there this weekend.

Without the popular mobilization, the catastrophe would have been even more serious. The cleansing definitely takes several months. Then we must evaluate the long-term effect.

The Israel Nature and Parks Authority (INPA) is also concerned about the many rocky areas along the coast that are home to a large number of marine species and may be more difficult to clean up.

In a statement issued on February 21, the Israeli government called on the public to refrain from going to the beach for leisure activities. They also allocated EUR 11.5 million to combat this ecological disaster.

An investigation has been initiated to identify the vessel responsible for the discharge. But tar has already reached beaches in Lebanon, especially in the Tire Coast nature reserve in southern Lebanon, according to L’Orient-Le Jour, one of the country’s largest newspapers.