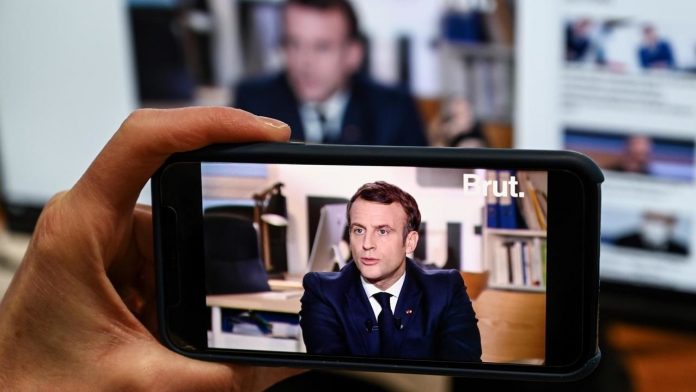 French President Emmanuel Macron in a more than two-hour-long and comprehensive interview on Friday with the online media outlet Outlet Brut denied allegations that his government had taken an illiberal turn with a controversial bill to protect police and violence against Islam. groups.

The interview, broadcast live by the video-based news portal on social media, was seen as an opportunity for Macron to reach out to young people in a wave of protests over freedom of expression and police brutality, and amid the heavy burden on France’s younger generations of Covid-19- pandemic and its accompanying lock-in.

As he sat around a table with his interviewers, the French leader answered questions about police violence, racial profiling, secularism and the place of Islam in French society, social support for young people, protection of the environment and his supposed bid for re-election in 2022.

The controversial public security proposal, which would have curtailed the freedom to share images that identify police officers, a key plan in Macron’s plans to make courts right-wing voters by being tougher on law and order, had sparked outrage among journalists. Lawmakers from Macron’s ruling LREM party said on Monday that they would propose a “complete rewriting” of part of the bill.

Not an ‘authoritarian state’

Asked about the international media branding his police plans as “illiberal”, Macron told Brut: “Today the situation is not satisfactory but forgive me, it does not make us an authoritarian state.”

“We are not Hungary, Turkey or anyone like that,” he said. “I can not say that we are reducing the freedoms in our country.”

Protests over the plans escalated after video footage from a black man named Michel Zecler was beaten by three police officers in his own music studio earlier this month. The police, who are alleged to be involved, have since been charged in the case.

Macron said that what the three policemen did was unacceptable, but that it did not mean that the force as a whole was violent and racist.

Society has become more violent as well, Macron said, and police had also been injured in clashes, including in Paris.

“A policewoman was beaten by protesters there. If you do not look at society as a whole, you are not fair,” Macron said.

The president said he had been let down by Western governments and intellectuals after French teacher Samuel Paty was beheaded by an 18-year-old Muslim after showing cartoons of the Prophet Muhammad in class.

After Paty’s assassination, Macron promised to stand firm against attacks on French values, and his government launched investigations into mosques suspected of promoting Islamist ideology, sparking anti-French protests in some Muslim countries and some criticism in the West.

“France was attacked because it defended freedom of expression,” Macron said. “We were very lonely.”