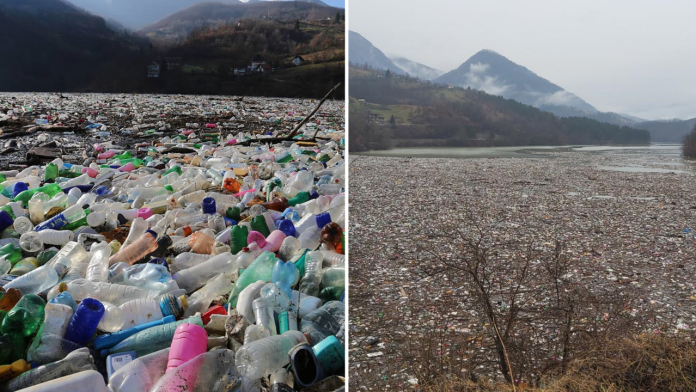 Lake Potpeć in Serbia turned into a watery landfill on December 31, when lots of rubbish was collected near a dam. The waste probably comes from one of the landfills along the river Lim. Poor waste management has caused problems in society for a long time, says one resident.

Framed by mountains and stretching as far as the eye can see, the lake next to the Potpeć Dam in southwestern Serbia should be beautiful, except for the hills of rubbish that suffocate its water. Citizen’s collective Savki naskip immortalized this scene in a video posted on Twitter on December 31:This video, filmed by Goran Prijovic, shows Serbia’s Potpeć lake filled with debris.

The same sad sight also greeted people living near the Višegrad dam, located about 50 kilometers down in neighboring Bosnia-Herzegovina, on 5 January.Journalist Enisa Aletic published photos showing mountains of rubbish piled up next to thepond on Twitter.

The waste accumulated on Lake Potpeć was washed in by the river Lim, which flows from neighboring Montenegro and crosses Serbia to continue into Bosnia-Herzegovina.

Activist Sinisa Lakovic confirmed to the news agency Reuters that the debris now covers almost 20,000 cubic meters of the lake.

‘People have been throwing rubbish by the river for decades’41 years  Prijepolje, Serbia

Ajsela Music, 41, lives about 20 kilometers from the dam. She went to Potpeć Lake on January 4 and took pictures of rubbish there, which she then posted on Instagram:Ajsela Music’s caption reads: ‘Too bad for “us”: disaster!’

The lake had still not been cleaned on January 10 and a new layer of snow covered the waste:

This photo shared by Music shows the state of the lake on January 10th. © Ajsela Music

She told our team that she was convinced that the rubbish came from a landfill near the town of Prijepolje:

The landfill in Stanjevina, located on the outskirts of the town of Prijepolje, is located on a river bank and we have been throwing our rubbish right next to the river for decades. The landfill was actually closed about a month ago after pressure from locals and political parties. At the end of December it rained heavily and a large amount of rubbish was found in the river Lim.

There was some rubbish in the lake before but much less. The lake is cleaned regularly. But this time it was awful to see the rubbish flow past and accumulate next to the pond.

Music shared this photo of the landfill in Stanjevina that was taken in 2019. © Ajsela Music

At this landfill, the rubbish is piled up in a very small space. Fires often break out. There was a lot of air pollution, although it was not talked about often.

You can see a fire burning in the Stanjevina landfill in this satellite image from Google Earth, taken on June 8, 2019. The river Lim flows just below. © Google Earth

There are a number of landfills located on the banks of the river Lim. Some people actually drop their trash directly into the river. Others use illegal landfills, says Music:

There are also many small landfills that my citizens have set up themselves, next to the river. The biggest issue is that we are not sufficiently educated about the environment and there is no punishment for people who pollute the country around them.

‘This happens every time the water level rises’

This is a photo of a small dump site created by residents near Lim Lim. © Ajsela Music

Jowharobservers spoke to Saša Bjelić, who lives near the lake. A school psychologist, he created the group Facebook “VoLim NE dam” in order to protect the river Lim:

What is happening right now is happening every time the water level rises. The river collects rubbish because the landfill in Stanjevina is located right by the river bed.

Stanjevina has indeed been shut down, but it has not been cleared. Garbage is now being dumped at another landfill in a neighboring town, which is also close to the river.

The European Union already provided money to deal with the problem of waste management in Serbia, but the local city governments have done nothing.

This is not the first time that waste has been piled up in Lake Potpeć. The situation first became problematic in August 2020. As for the dam in Višegrad, which is located in Bosnia-Herzegovina, a Google Maps image from September 2018 shows waste stacked on the water surface.

This issue is not new in Serbia. Back in June 2019, residents of the city of Novi Pazar raised the alarm about river pollution by posting a video showing a crane collecting rubbish in the river Jošanica … only to drop it back into the river on the other side of a bridge.

In June 2019, there were major floods in the Novi Pazar region.

The Serbian energy company Elektroprivreda Srbije and the water company Srbijavode will work to clean up Lake Potpeć, according to an Instagram post from Srbijavode on January 6.

On 4 January, the Serbian Minister for the Environment, Irena Vujović, called for “cooperation between the relevant ministers in the neighboring countries” in order to “find a long-term solution to the problem of rubbish in Lim and Drina. [rivers]”.