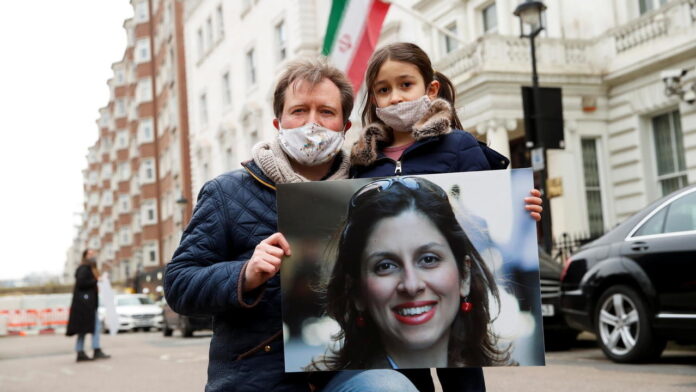 The fate of Nazanin Zaghari-Ratcliffe, a British-Iranian woman detained in Tehran, is linked to a arms deal dating back to the ouster of Iran’s Shah Mohammad Reza Pahlavi. Britain has now agreed to pay Iran its fees. But US sanctions are the latest challenge in the case of yet another victim of Iran’s hostage diplomacy.

Nazanin Zaghari-Ratcliffe’s life changed on April 3, 2016. A British-Iranian dual citizen, Zaghari-Ratcliffe, was arrested with her daughter, Gabriella, then not yet two years old, at Tehran’s Imam Khomeini airport.

An aid worker, Zaghari-Ratcliffe, had traveled to Iran to visit his family for Nowruz, the Iranian New Year. She was on her way back to Britain when she was arrested and accused of having “planned to overthrow the Islamic regime” – an accusation she strongly denies. Zaghari-Ratcliffe was then separated from her daughter, whose British passport was confiscated and sent to prison.

It was the beginning of a long ordeal for the young mother, marked by hard stays in solitary confinement in windowless cells, blindfolded interrogations and hunger strikes to demand medical care. In November 2016, Amnesty International issued a warning that Zaghari-Ratcliffe’s serious deprivation of liberty had prompted her to consider suicide.

After nearly five years in prison, Zaghari-Ratcliffe now faces new charges of “spreading propaganda against the regime”. The Iranian justice system has summoned her on Sunday, March 14, to investigate the new charges against her. Zaghari-Ratcliffe’s passport has still not been returned and she cannot leave to join her husband and now six-year-old daughter, who returned to London in 2019 to start school in the UK.

On March 7, Zaghari-Ratcliffe completed her first sentence and had to remove her electronic bracelet while under house arrest. But she is far from finished with the Iranian legal system. The fate of this 42-year-old project manager at the Thomson Reuters Foundation is linked to a diplomatic game that has nothing to do with this mother of a young girl, according to several experts.

For her husband, Richard Ratcliffe – who has been tirelessly fighting for his freedom since her arrest – his wife is a “hostage” in an ominous political game involving a £ 400m (€ 464m) debt owed to Britain within Iran in the context of a weapons agreement signed before the Islamic Revolution in 1979.

Iranian officials told his wife that her detention would end when London paid the infamous £ 400 million debt, Ratcliffe told the British press.

“At that time, Iran’s shah bought more than a thousand tanks [1,750 Chieftain tanks] from Britain and paid an advance because there was a lot of money in the Iranian state coffers, reminded François Nicoullaud, a French diplomat who served as France’s ambassador to Iran between 2001 and 2005. But after the 1979 revolution, Britain refused to honor the order.

In 2017, after years of negotiations and legal battles, the UK said it was ready to settle its account with Tehran, while denying any connection to the remaining Zaghari-Ratcliffe case.

But that was before Donald Trump withdrew the United States from Iran’s nuclear deal in 2015 and imposed harsh sanctions under his government’s “maximum pressure” strategy. “The British do not deny that they have a debt. The problem is the US sanctions that prevent Britain from paying the money to Iran,” Nicoullaud explained. “Poor Nazanin Zaghari-Ratcliffe is the victim of an insoluble struggle between two states.”

All eyes are now on Washington, DC, where Joe Biden’s arrival as president could eventually lead to the lifting of sanctions banning banking transactions with Iran. But more than a month into his presidency, Biden has not yet launched a major initiative to bring the United States back to the 2015 agreement, a campaign promise that some fears have been put on the back burner.

Aware of the efforts, her husband has continued to put pressure on his government. “In my opinion, it is clearly a game of chess. She’s the farmer, “Ratcliffe explained in an interview with the New York Times last week.

The case of Zaghari-Ratcliffe is not unique. About a dozen other foreign and dual citizens are currently trapped in the same situation. These include two French citizens, researcher Fariba Adelkhah – who was placed under house arrest in October 2020 after serving 16 months in prison – and a French tourist imprisoned since May 2020. The latter was arrested under obscure circumstances in a desert area near the Iran-Turkmenistan border while he toured the country in a van.

While some call this phenomenon “hostage diplomacy”, Nicoullaud prefers the term “hostage”. “It’s nothing less than that. It’s taking hostages. It’s a very bad Iranian habit to use quid pro quo. It started with the beginning of the Islamic Republic in 1979, when 53 hostages from the US embassy in Tehran were held in almost one and half a year. Since then it has been repeated and Iran has seen that this extraordinary pressure has worked over the years. “

One of the most recently held hostages, the French researcher Roland Marchal, was released in March 2020 after nine months in custody. Marchal was released as part of an exchange with an Iranian engineer detained in France. The Iranian engineer, Jalal Ruhollahnejad, was arrested in France and questioned by the United States on charges of violating sanctions on imports of sensitive electronic systems into Iran.

This article is a translation of the original in French.