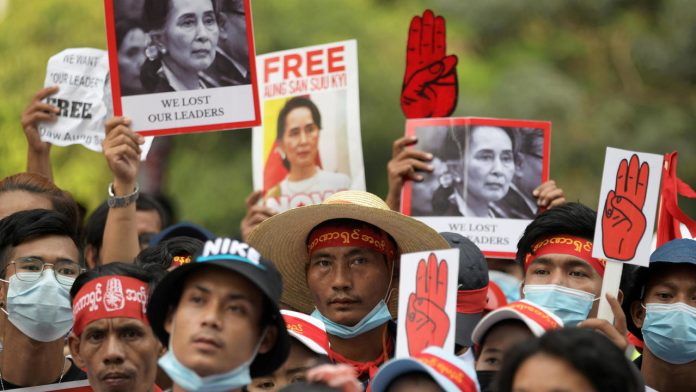 Myanmar’s military leaders came under renewed pressure at home and abroad on Tuesday, with tougher sanctions from Washington and Brussels, and some of the largest demonstrations against their rule since taking power three weeks ago.

Authorities have gradually stepped up their use of force against a massive and largely peaceful civil disobedience campaign demanding the return of fired leader Aung San Suu Kyi.

Three anti-coup protesters have been killed in demonstrations so far, while a man patrolling his Yangon neighborhood against nightmare was also shot dead this weekend.

“We will not hesitate to take further action against those who commit violence and suppress the will of the people,” said Foreign Minister Antony Blinken.

He called on the regime to end its attacks on peaceful protesters, journalists and activists, release prisoners detained since the coup and “restore the democratically elected government.”

“All direct financial support from our development system to the government’s reform program is retained,” said Josep Borrell, the EU’s foreign policy chief.

But he said the bloc would not restrict trade ties for fear it could harm the wider population.

Myanmar’s military has used tear gas, water cannons and rubber bullets against protesters, with isolated incidents of the use of live rounds.

They have also increased the presence of security forces in Yangon, Myanmar’s largest city and commercial hub.

More than 680 people have been arrested since the coup on February 1, according to the assistance group Assistance Association for Political Prisoners, with almost everyone left behind bars.

Overnight closures of the internet have also become routine and have become fearful of arresting protesters during arrests.

The measure has not succeeded in dampening weeks of massive street demonstrations, along with a large number of striking officials, bank staff and healthcare staff.

Tens of thousands gathered on Monday in the capital Naypyidaw, a military stronghold. More than 100 people were arrested as police chased protesters through the streets.

Protesters in Yangon ignored security forces and barricades around the city to hold makeshift guards for protesters killed in the riots.

“We can only pray for them,” says student Thura Myo. “Even when we are sad, our voices will be heard by the international community.”

The work boycotts are administered by the government together with the business community and the banking sector, and this weekend the junta issued an ominous warning suggesting that its patience was thin.

“Protesters are now encouraging the people, especially emotional teenagers and young people, to a confrontation path where they will suffer the loss of life,” said a statement issued by state media.

Suu Kyi has not been seen since she was arrested in a dawn ramp but has been hit by two charges by the junta, one of them for having unregistered walkie-talkies.

The hearing is expected on March 1.