Home NEWS What do we know about the Islamic State group in DR Congo?
Facebook
Twitter
WhatsApp
Linkedin
LINE 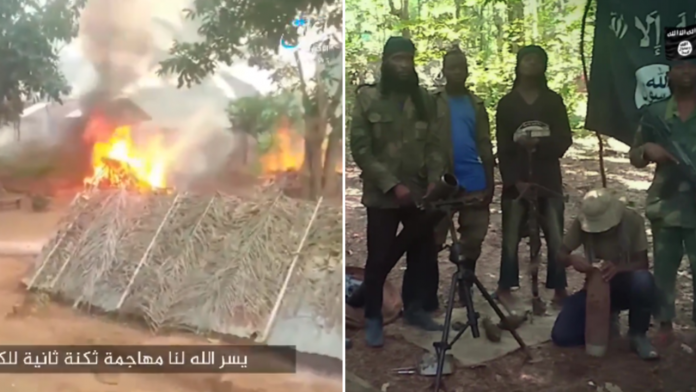 An armed Islamist group known as the Allied Democratic Forces or ADF has carried out at least two attacks on villages in the Beni area in the northeastern part of the Democratic Republic of Congo since 28 December. One of the attacks was claimed by the branch of the Islamic State in Central Africa. What are the links between these two groups and is the Islamic State’s influence in the region growing?

The Allied Democratic Forces (ADF) started as a rebel group from Uganda against Ugandan President Yoweri Museveni. In 1995, this Muslim majority group moved into the eastern part of the Democratic Republic of Congo.

One of the most violent of the many armed groups in this region, the ADF is accused of having massacred about a thousand civilians since October 2014, although they have never officially taken responsibility for these attacks.

In the last two weeks, there have been several deadly attacks on villages in the Béni region, which have been attributed to the ADF.

On December 28, armed groups attacked positions held by the armed forces of DR Congo (known by the acronym FARDC) near the village of Loselose, located about 40 kilometers from the capital Béni. They occupied the village for three days before being driven out by the Congolese army on 1 January.

This attack was claimed by the Islamic State province of Central Africa (ISCAP) in a statement. They repeated these claims in a video adorned with the emblem of Amaq, the IS propaganda wing. The video, which lasts less than a minute, shows buildings burning while one of the combatants, who speaks in Kiswahili, says, “We are happy to have attacked the second garrison of the infidels we encountered in the village of Loselose. They all fled and now we are burning the village. ”

In the video you can see a child among the soldiers.

Screengrab of the video of the propaganda wing of the Islamic State organization, Amaq, on December 28, 2020, showing rebels in the village of Loselose, near Béni. © Twitter

Fourteen Islamist fighters and two soldiers from the FARDC (Congolese Army) died in battle across the village, according to Anthony Mwalushayi, the spokesman for the Congolese Armed Forces (FARDC), who spoke with the JowharObservers team.

Mwalushayi also reported that “two white men, probably Arabs” were found among the dead militants, who he said were “certainly instructors who came to train the fighters and strengthen their ideology”. JowharObserver teams cannot independently verify this information.

Mwalushayi said this was the first time he had witnessed “white” or Arab fighters in the ADF. Most members of the ADF are from Uganda, but Mwalushayi said there were also fighters from “Chad, South Africa, Tanzania and Mozambique.”

No documents confirming the Islamic State’s presence in the zone were found after the fighting or about the dead militants, according to both Mwalushayi and local civil society leaders.

On January 5, several days after the fighting in Loselose, another attack attributed to the ADF occurred in the nearby village of Mwenda.

“During this attack, 22 civilians were killed. The attackers mainly used blades and used firearms to kill their victims, a community leader named Paluku Batoleni Wilson told the JowharObservers team. Wilson serves as President of Civil Society in the Ruwenzori sector.

The Islamic State group did not claim this attack, even though it took place in the same zone as the December 28 attack.

“It is difficult to know whether all or only part of the ADF has joined the Islamic State.”

The Islamic State organization seems to be claiming some attacks carried out by the ADF and not others. So what is the relationship between these two organizations? Matteo Puxton, a specialist in the Islamic State’s military strategy, studied the activities of jihadist groups in the Democratic Republic of Congo between 2019 and the end of August 2020.

There is nothing new about the Islamic State carrying out attacks in Béni. The very first attack they claimed in Central Africa was on April 16, 2019. It was an attack on Congolese army barracks in the village of Bovota [Editor’s note: located 80 kilometres from Béni]. This attack was claimed in a statement released by Amaq, the propaganda wing of the Islamic State group.

The first IS video claiming an attack in the region was released on July 14, 2019, three months after the first statement was released. The video is less than 20 seconds long and shows the bodies of Congolese soldiers who were killed by improvised explosive devices two days earlier in Oweisha, a region near Beni.

A video pledging allegiance to Abu Bakr al-Baghdadi was released on July 24, 2019 [Editor’s note: Al-Baghdadi, who was formerly the head of the Islamic State group, has since been killed]. Most of the video was shot in the Democratic Republic of Congo, but part of the film comes from Mozambique, where Ansar al-Sunnah, another Islamist militia group, also promised the organization of the Islamic State.

The part of the video filmed in the DRC shows a boss, Abu Abdul Rahman, who they call a sheik. There are a number of child soldiers shown in the video. Most of the jihadists’ weapons were taken from the Congolese army or from the UN mission in the Democratic Republic of Congo (known as Monusco), which has been fighting the ADF with the army. Most are PKM machine guns, RPG-7 rockets and Galil MAR rifles.

Screengrabs of a video showing warriors in the Democratic Republic of Congo and Mozambique pledging allegiance to Abu Bakr al-Baghdadi. The video was published online on July 24, 2019. © Social media

But since the Islamic State first claimed an attack in the region in April 2019, they have released various documents about their involvement in Central Africa, including published statements, articles in the weekly alNaba and photos and videos via their propaganda arm Amaq.

Another sign of the link between the ADF and the Islamic State organization came after the arrest of Waleed Ahmed Zein, a financier of the Islamic State, in Kenya in July 2018. An investigation revealed that he had also transferred about $ 150,000. [122,500 euros] to ADF.

These propaganda posts and this economic link show that there are links between the Islamic State and the ADF, but they remain opaque. It is difficult to know whether the entire ADF is adapted to the Islamic State or just part of the group.

Another exciting element is that the members of the ADF have published more and more autonomous propaganda videos on WhatsApp this year, which means that they are not spread by an official branch of the Islamic State.

It is thus impossible to know whether the entire ADF has adapted to the Islamic State or not. There are two possibilities. The first is that the entire ADF has promised itself to the Islamic State, but the IS organization does not claim all attacks. There is a historical precedent for this – the IS did not, for example, claim any of the attacks carried out by its members in Syria and Iraq. It is also possible that some factions of the ADF have not established links to the Islamic State group, which would explain why the latter has not taken responsibility for attacks carried out by these unplanned factions.

According to a report published by the Congo Study Group in November 2018, ADF has historically been divided into two main groups. One operates near the village of Mwalika, located in the southern region of Béni in the river plain of the Semuliki river. The other operates in an area called the “Triangle of Death” east of the road between Béni and Eringeti. The report quotes many Congolese warriors as well as intermediaries with close contact with the group who say that certain factions have split and no longer follow the ADF’s orders.

Following the defeat of the Islamic State in its bastions in Iraq and Syria, the terrorist group began working to strengthen its branches in Africa and, to a lesser extent, in southern Asia. The new center of the Islamic State is moving from the Middle East to Africa, according to the latest edition of the Global Terrorism Index, published on November 25, 2020. The report states that the victims of the group in sub-Saharan Africa increased by 67% compared to 2019. The report adds that the Islamic State in 2019 accounted for the largest number of terrorism-related deaths in sub-Saharan Africa and killed 982, representing 41% of the total victims of terrorism ”.