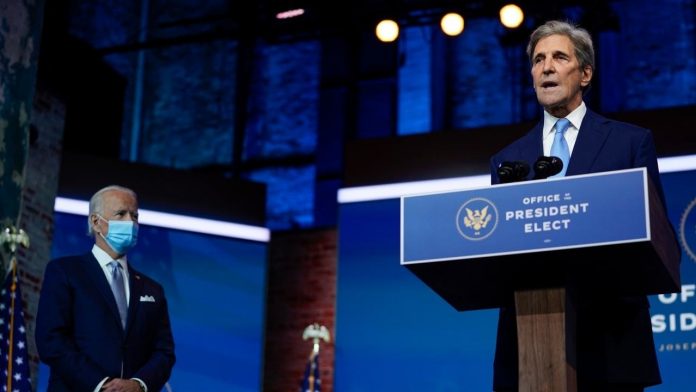 By appointing former Senator and Secretary of State John Kerry as the first ever US climate leader, President-elect Joe Biden is sending a clear message. Not only is he reversing President Donald Trump’s reversal of America’s commitments to combat climate change – he also plans to pursue those commitments much further.

“For the first time ever, the United States will have a full-time climate leader who will attend ministerial-level meetings,” Biden said on Tuesday, announcing Kerry’s appointment as the United States’ top climate official.

“For the first time ever, there will be a rector of the National Security Council who will ensure that climate change is on the agenda in the Situation Room.” – The elected president @JoeBiden to appoint @JohnKerry as the president’s ambassador for the climate. pic.twitter.com/chVuorXLi6

As Secretary of State under former President Barack Obama, Kerry helped negotiate the Paris climate agreement and signed it in April 2016 on behalf of the United States.

The agreement, a legally binding UN document signed by almost 200 countries and which entered into force in 2016, aims to keep the global temperature rise in this century below 2 degrees Celsius above pre-industrial levels.

But Trump, a champion of the fossil fuel industry who has questioned the science of climate change, announced in June 2017 – shortly after taking office – that he had pulled the United States, the world’s second largest polluter after China, out of the deal.

The decision has not been the deadly blow originally feared, as it only came into force three weeks ago – on November 4 – a day after the US presidential election. However, the last three years of American inactivity have been a setback for global climate efforts.

“Admittedly, it had consequences in that the United States no longer participated in international climate negotiations and that their diplomacy tended to undermine the implementation of the Paris Agreement, rather than help it succeed,” said François de Rugy, a French MP with the La République en Marche party decision. and former Minister of the Environment in the government of President Emmanuel Macron.

This is now expected to change, as Biden announced that the United States will accede to the Paris Climate Agreement on January 20, 2020, the first day of its presidency.

All nations must raise their ambitions together, otherwise we will all fail together. And failure is not an option. pic.twitter.com/RCxRy2M6vj

In connection with the announcement of his appointment as climate leader, Kerry emphasized the need for global cooperation on the climate crisis. No country alone can solve this challenge. Even the United States, for all our industrial strength, is responsible for only 13 percent of global emissions. To end this crisis, the whole world must come together, says Kerry.

“You have the right to join Paris on day 1,” he added, speaking to Biden. “And you have the right to realize that Paris alone is not enough. At the global meeting in Glasgow, one year from now, all nations must raise their ambitions together, otherwise we will all fail, together. And failure is not an option, he added.

De Rugy agrees that international cooperation – and in particular a renewed American role – is crucial.

France is seen abroad as a leader in environmental and climate issues. It is the legacy of the Paris Agreement, but this legacy must be kept alive. [Former president] François Hollande did it, and Emmanuel Macron has raised the torch, says De Rugy to Jowharin an interview on Wednesday. “But France cannot do it alone, and we must constantly find new support and avoid new opposition, as was the case with Trump.”

A priority for Kerry will be to reassure America’s international partners, whose faith was shaken by Trump’s withdrawal from the Paris Agreement, which in turn paved the way for countries such as Australia and Brazil to weaken their ambitions.

“There was Trump, but also (Jair) Bolsonaro election in Brazil; and in Australia, the Conservative majority won the legislative election, in part because of the climate – or at least because in a coal economy they refused to commit to reducing greenhouse gases. In Canada, [the environment] was also a very controversial topic and Justin Trudeau barely won re-election, de Rugy said.

“And Russia was not dissatisfied with the United States’ disconnection, because it also allowed it to be disconnected. These are some pretty important powers that have either held back actively, like Trump, or even if they are less visible, equally back. This is a trend that needs to be reversed, he added.

Kerry, 76, served in the Senate along with Biden for decades. He was first elected in 1984 as a Democratic senator for Massachusetts. In 2004, he won his party’s nomination for president but lost to incumbent President George W. Bush.

When Biden became Obama’s vice president in 2009, Kerry took up his position as chairman of the Senate Foreign Relations Committee; then he served as secretary of state during Obama’s second term as president.

He was described as a tireless diplomat. In addition to negotiating the Iran nuclear deal, promoting Israeli-Palestinian peace talks, drafting an agreement with Russia to free Syria from chemical weapons, and a host of other complex diplomatic missions, Kerry helped negotiate the Paris climate agreement.

On November 11, 2016, three days after Trump won the US election, Kerry traveled to Antarctica hoping to see the first place where ice melts and cause concern about rising sea levels.

The trip, planned before the election, was the first by a US Secretary of State, the highest-ranking official ever to visit the frozen continent. It was intended as a fact-finding mission ahead of international climate negotiations later that month in Marrakech, Morocco, where Kerry was scheduled to speak.

Trump’s victory complicated Kerry’s task, as the future president’s intention to withdraw from the Paris climate agreement suddenly seemed more urgent than the melting glaciers themselves.

Kerry continued his environmental efforts long after Trump took office and resigned as Secretary of State.

In 2019, he established World War Zero, a climate coalition with leading military officials, politicians and celebrities, such as Leonardo DiCaprio, Emma Watson and Arnold Schwarzenegger – the former Republican governor of California – that aims to “hold more than ten million climate talks.” 2020 with citizens across the political spectrum “, according to the coalition’s website.

‘A remarkable story of climate change’

Kerry’s appointment has been welcomed worldwide. An editorial in the British newspaper The Times on Wednesday praised Biden’s choice for the job and urged Prime Minister Boris Johnson to follow Biden’s example.

“His appointment of John Kerry, the former Secretary of State, as his climate envoy underscores the seriousness of his commitment to secure a global climate agreement at the COP26 summit in Glasgow next year. It should be especially welcome for Boris Johnson, who will host the summit and pursue his own conservative green agenda. The prime minister must appoint his own climate envoy of similar size to help him secure what should be his own moment of global leadership, says management.

Environmental groups also praised Kerry’s appointment. “There are few people in the world who have such a remarkable history of climate change,” Andrew Steer, president of the World Resources Institute, told AFP.

It is an extremely important signal that any of John Kerry’s position is leading the global effort to combat climate change as a full member of the National Security Team. This is a historic priority of climate change, the crucial national security issue in our lives.

The announcement that Kerry would be part of the National Security Council, the first time an official dedicated to climate change will serve it, shows Biden’s commitment to address climate change as an urgent national security and foreign policy issue, said the president-elect’s transition team. in a statement on Monday.

While Kerry will be responsible for international coordination of high-level climate action, Biden said he would also appoint a high-level policy coordinator and a policy-making structure to lead efforts in the United States.

Last summer, Biden unveiled a $ 2 trillion plan to significantly increase the use of clean energy in construction, electricity and transportation, aiming not only to strengthen infrastructure and create economic opportunities but also to end carbon dioxide emissions from power plants by 2035.

Whether the new administration will be able to implement its ambitious climate laws depends on how two Democratic candidates for the US Senate do so in two run-off elections in Georgia on 5 January. But even if the Democrats do not gain control of the Senate, Biden has already said he would sign a series of executive orders on climate change, right at the beginning of his presidency.

Commitment on US emissions

The goal negotiated at COP 21 2015 in Paris, to achieve carbon neutrality by 2050, seemed radical at the time. But the European Union and other countries have since reaffirmed 2050 as their goal.

China announced in September that it intended to achieve carbon neutrality by 2060, by striking a blow at the Trump administration to thwart global action.

Biden has also set a goal of net carbon neutrality by 2050. But even though US emissions have fallen in recent years due to the increasing contribution of natural gas and renewable energy – and this year’s restrictive measures to combat the spread of Covid-19 – the US is still far from reaching that goal.

Speaking of Kerry, he said: “If I had a former Secretary of State who helped negotiate the Paris climate agreement, or a former presidential candidate, or a former senior senator, or head of a major climate organization for the job, it would have shown my commitment to the United States and to the world. The fact that I choose the person who is all of these things speaks clearly to my commitment, he said.