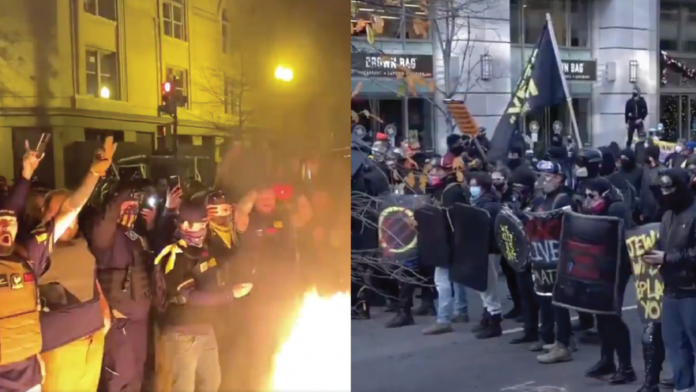 On December 12, two days before the ballot paper’s formal vote confirming Joe Biden’s presidential victory, thousands of protesters gathered in Washington DC to support President Trump’s attempt to annul his defeat. As the evening fell, violent clashes broke out in the streets between two sides known for their mutual enmity: the proud boys, a right-wing “Western chauvinist group” and Antifa, a left-wing activist movement. Who are these groups and what is behind their repeated clashes?

The 2016 election and the controversial Trump presidency that followed triggered an increase in the visibility and popularity of political groups, with two names emerging from the battle.

The proud boys describe themselves as a “fraternal organization” that promotes “anti-political correctness” and “anti-white guilt” and distances itself from racist “alt-right” groups. The group was founded in 2016 after President Trump’s election. Civil rights groups such as the Southern Poverty Law Center have classified the proud boys as a hate group because of their anti-Muslim and misogynistic rhetoric, their advocacy of white nationalist ideas and their affiliation with famous extremists.

Antifa, short for “anti-fascist”, is a “policy or activity of radical left-wing opposition to the far right”, according to Mark Bray, historian and author of “Antifa: The Anti-Fascist Handbook”. Although Antifa is not an organization but a policy that precedes the Trump presidency, the emergence of alt-right groups such as the Proud Boys provoked the formation of local “Antifa” groups to confront right-wing extremist activities through physical disruption, sometimes by combining forces. with activist groups such as Black Lives Matter.

After clashes during high-profile events such as the Charlottesville Rally 2017, the groups made national appearances in the social movements in 2020 and met protests and rallies in cities such as Portland and Washington DC after the November election.

“Both the proud boys and Antifa had been aware of each other’s expected presence in advance and prepared accordingly.”

Brendan Gutenschwager, an independent reporter, was present at the Trump demonstration in Washington DC on December 12 and recorded clashes between the groups. He tells what he saw:

The Proud Boys had been in town all day, mostly hanging around Freedom Plaza, the Supreme Court and the US capital. Their presence was meant to support the president and act as a kind of “security” against agitators or counter-protesters.

A Twitter video from the rally on December 12 shows Proud boys demonstrating in their signatures black and yellow colors, chanting “F ** k Antifa” and “USA”

As night fell, the proud boys stopped in the streets, while a large group of Antifa and Black Lives Matter protesters gathered a few blocks away. Both groups came prepared, some armed with weapons such as spreading / pepper spray and knives. The groups tried to confront each other, but the police intervened and prevented a large-scale fight.

But some people managed to get over to the other side, and clashes occurred – people spray-painted and maced each other, swinging sticks and other objects, a few tingles at one point in one of the larger clashes.

This December 13 Twitter video shows the proud boys coming together and beating a black man, who in turn stabbed four of his attackers. The proud boys can be heard shouting “F ** k Antifa”; however, it is unclear if the man was part of an Antifa group.

Here you can see a black man being surrounded by aggressive Proud Boys, being punched in the head, then pulling out a knife and continuing to be repeatedly attacked. The man defends himself with the knife while he tries to escape but is surrounded by the mob and beaten on the ground. https://t.co/eqNpPKrHEU pic.twitter.com/Xjl0Kt11wG

In their ravages through the city, the proud boys also tore down and put up banners for Black Lives Matter belonging to local churches, as shown in the video below. While the banner was burning, group members laughed and chanted “F ** k Antifa.”

“What we see in the physical confrontations between these groups is just the tip of the iceberg.”

Collisions to the side explained Dr. Bray that the strategies and confrontations between the groups go beyond the sensational images:

The proud boys, like many right-wing extremist groups, have tried to distance themselves from aspects of fascist politics that became taboo. They say they are not racist, they are “Western chauvinists” – even if they do not reject racists or white supremacists.

But they still try to exploit dissatisfaction with aspects of cultural wars over feminism, queer and trans-liberation movements and what they perceive as a shame of masculinity. They also try to present themselves as half serious, half joke (the name “Proud Boys” was taken from a song in Disney’s Aladdin’s stage music adaptation). So the group becomes a fun social space for strangers and dissatisfied, predominantly young white men who argue that the left can not take a joke.

Regarding the Antifa movement, Dr. Bray that anti-fascists organize to prevent the proud boys and other right-wing extremist groups from normalizing their policies in local communities, whether it is through physical disturbances or less flashy tactics.

Anti-fascists can work to shut down events of right-wing extremist organizers by calling site owners and encouraging them to cancel. Boycotts and physical occupation / confrontation have also been used. But most of their work revolves around examining figures from the far right to organize doxxing: revealing their member identities, which increases the social costs of belonging to these groups.

Anti-fascists have an opinion on preventive self-defense. Even when they physically confront a right-wing extremist group, it is an aspect of a larger strategy to reduce the risk of attacks ever occurring.

A Twitter video on December 12 shows Antifa protesters in the front line, separated from protesters by Trump by a police line, shouting “Go home Proud boys” and “F ** k the proud boys”.

Confrontation tactics from both sides have caused ordinary politicians from both parties to condemn the groups. After being accused of braving the proud boys during the first presidential debate, President Trump returned to his word a few days later in a Fox News interview in which he condemned the group as well as white supremacists.

Incoming President Joe Biden has condemned Antifa and the use of force by protesters on the left and right.

Dr Bray says that although both sides support illiberal and confrontational policies, their vision of political violence differs.

The far right argues that because of the bureaucratic, liberal bureaucracy around the state, state forces cannot do their job, so they must use militias and vigilance to make up for this shortcoming – exceeding law and order to restore it.

Antifa groups are also skeptical of the state as a means of justice, so they delegate the police and the state and encourage self-defensive mobilization of society. It’s about the kind of violence people feel comfortable with – inside or outside the state – and whether they believe in the state’s sovereignty to deal with problems or not.