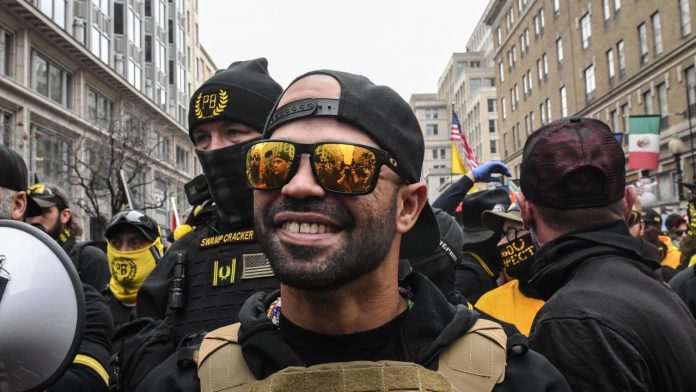 Two days before planned demonstrations against the certification of Joe Biden’s election to the next US president, Enrique Tarrio, leader of the far-right Proud Boys, was arrested in Washington, DC. He was born in the United States to Cuban-American parents and has led the extremist group for more than two years. Jowharlooks at this controversial character.

When you are in March, Tarrio always wears the same outfit. Baseball cap on his head, sunglasses on his nose, yellow and black polo shirt and bulletproof vest on his back as he leads his troops, the Proud Boys, an increasingly armed alt-right group.

Since Joe Biden was announced the winner of the 2020 US presidential election, Tarrio and his men have taken to the sidewalk to condemn what they claim was a fraudulent vote. The group plans to meet in Washington, DC on January 6 to protest the certification of Biden’s victory in Congress.

This time, however, Tarrio will not be there. The 36-year-old was arrested Monday in the US capital for his part in the burning of a “Black Lives Matter” banner taken from a historic black church in DC during a demonstration last month. Tarrio acknowledged his role in the destruction of the banner in an interview with the Washington Post, but said his actions did not constitute a hate crime because he believes the Black Lives Matter movement “has terrorized the citizens of this country.”

He is also accused of a crime in the possession of two high-capacity firearms magazines, which were found when he was arrested.

Enrique Tarrio, leader of the Proud Boys, a right-wing extremist group, is seen at a “Stop Stealing” meeting on the outcome of the US presidential election outside the Georgia State Capitol on November 18, 2020 in Atlanta, Georgia. AFP – Elijah Nouvelage

From Little Havana to jail time

The time behind the bars forced Tarrio to face his mistakes, according to the Miami New Times. He then created two companies, one that installed security systems and another that provided GPS systems to companies.

It was in 2017 that Tarrio began hanging out with members of the Proud Boys, which was founded a year earlier by Gavin McInnes, co-founder of the magazine Vice. Tarrio, who grew up in a conservative Cuban community, was quickly seduced. In August, he attended the infamous “Unite the Right” rally in Charlottesville, along with hundreds of white supremacists, nationalists and other neo-Nazis protesting against the removal of the statue by secessionist general Robert E Lee. A protester drove his car into counter-protesters and killed one person.

The proud boys reject claims that they are white supremacists, anti-Semites, racists or fascists. “I’m pretty brown. I’m Cuban. There’s no white supremacist about me,” Tarrio told Insider. He sees himself above all as a conservative. “I think conservatism is what will save America,” he said. The Proud Boys are just a “group of guys hanging out and drinking beer together and just having a good time,” he told Heavy. “Obviously we are a political group, but it is of a secondary nature.”

But on social media, the picture looks completely different. In his personal accounts, Tarrio humiliates transgender people and said that the African-American actress Leslie Jones looked like a “monkey”. In 2018, his Twitter profile was interrupted. The Southern Poverty Law Center classifies the proud boys as a general hate group known for anti-Muslim and misogynistic rhetoric.

Violence is only required to join the group. Every man who wants to be a proud boy must complete four initiation rituals: express the phrase “I am a Western chauvinist and I refuse to apologize for creating the modern world, and we call ourselves” the proud boys “, mention five marks of captured grain while fighting, get a tattoo of the Proud Boys logo, refrain from masturbation and engage in fights with extreme left groups.Tarrio completed the fourth step by punching someone he thought was a member of Antifa in June 2018 He then climbed up steps in the organization until he became leader in November.The New York Times estimates that the group has between 1,000 and 3,000 members.

Supports Trump and is supported by Trump

Since then, the proud boys have made a name for themselves by openly supporting President Donald Trump. On September 29, during a televised debate with Joe Biden, Trump gave an ambiguous response when asked to condemn the group – urging them to “stand back and stand by.” Roger Stone, a former adviser to Donald Trump, also appeared regularly with members of the militia.

During the most recent presidential campaign, as Secretary of State for Latinos for Trump in Florida, Tarrio worked tirelessly to get the businessman re-elected. He told the New York Times that he “personally knocked on 40,000 doors” to win over voters in the state, which Trump won.

Before his arrest, the leader of the Proud Boys had warned that he would continue the fight. He promised on social media that his group would have an “unsurpassed” presence in Washington and that they would be able to dress in black, like the far-left Antifa activists, to pass “incognito”.

Police voiced fears of violence and concerns that protesters would be armed. The National Guard announced that more than 300 soldiers will be deployed this week in the capital to support local law enforcement agencies. The Secret Service will also be mobilized. Washington Mayor Muriel Bowser said: “We do not allow anyone to incite violence or intimidate our citizens.”

I urge Washingtonians and those living in the region to stay out of the center on Tuesday and Wednesday and not engage with protesters who come to our city to seek confrontation, and we will do what we have to do to ensure that everyone who participates remains peaceful.