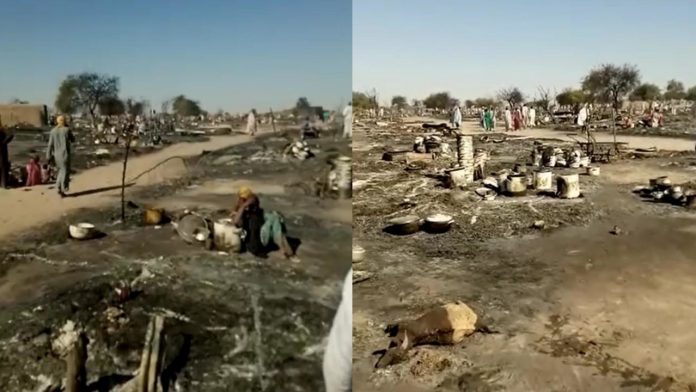 Terrorists believed to be affiliated with Boko Haram launched a bloody attack on Toumour, a village in southeastern Niger, just on the border with Nigeria, on the night of December 12. At least 28 people were killed. Videos posted on Twitter on December 13 show the village in ruins after the attack.

The attack took place on the day local and regional elections were held. Although the terrorist organization Boko Haram is believed to be behind the attack, they had not yet taken responsibility on 16 December. There is a heavy Boko Haram presence in the Lake Chad basin, which extends to Nigeria, Niger, Cameroon and Chad.

About 70 militants carried out the attack, which left at least 28 people dead and dozens injured, according to reports from local authorities. People who returned to the village after the militants left posted videos showing the burned-out ruins of homes and other buildings.

“Some victims were killed or shot, while others burned to death in huts completely consumed by the flames of a huge fire attacked by the attackers,” a local official told the French news agency AFP.

‘We were completely surprised by this attack’

Youssouf (pseudonym), a village master, was present during the attack.

I’m currently in hospital in Diffa. There are many wounded here. Some have burns.

We had just finished the evening prayer when the village was attacked. I was standing with a group of local dignitaries outside our traditional manager’s home. We were just talking when we saw a group of about a dozen people approaching us on foot. Hell broke loose after the first shots went off.

This tweet from December 13 reads: In the Diffa region of Toumour, Niger, the terrorist attack attributed to Boko Haram (very active in the area) leaves a city in ruins and bears the stigma of an unjust incurion.

Now the calm has returned to the village. But we lost everything. Most homes were destroyed [Editor’s note: Between 800 and 1,000 homes were destroyed according to regional authorities in the Bosso department]. Many thatched homes burned down. The main market was destroyed. Our windmills were burned, as were several vehicles.

We were completely surprised by this attack. We’re afraid they’ll come back. The terrorists are unpredictable. We need protection, food and blankets. Lots of people fled the village. It will take time for life to return to normal. ”

In recent months, there has been a sharp increase in terrorist attacks in Niger. The village of Toumour is just across the border from Nigeria and is home to thousands of refugees fleeing the violence from Boko Haram in the Nigerian state of Borno, which has long been terrorized by the group affiliated with the terrorist organization Islamic State. There are more than 260,000 displaced people in the Diffa region, of whom 30,000 currently live in Toumour, according to figures from the government body responsible for keeping track of refugees and migrants. [Editor’s note: In French, the Direction nationale de l’État civil, des migrations et des réfugiés du Niger].

“Toumour is a target because society has resisted terrorism”

The latest attack has undermined the systems put in place to protect refugees and displaced thousands more.

Ibrahim Elh is the Regional Administrator of the Commission responsible for assisting displaced persons. Elh and his team work with humanitarian organizations to respond to the urgent needs of the victims of this attack.

The army regained control of the village. We were on the ground the day after the attack. The governor of Diffa also traveled to the village on 14 December.

There is total panic among the population. People are fleeing the village. But it’s not easy. It is December so many roads are cut off by floods from the river Komadugu. People cross the river however they can. But four people who fled the attack on the village drowned in the river.

Injury after the attack by Boko Haram in Toumour, Niger. © Screengrab, DR

Right now, a large number of people are trying to reach Diffa, the capital of the region, located about 75 kilometers from Toumour, where they hope to find host families. Others will continue to the Sayam Forage refugee camp, which is run by the UN High Commissioner for Refugees. We must regulate these movements.

But some people also decided to stay. We must make sure they are safe and provide them with food, water and protection because the fire destroyed all the village’s reserves.

Toumour is a target because the Fula people who live there have always resisted the terrorists. They never wanted to leave because the village is symbolic of the indigenous Fulani community in this area. It is home to the largest traditional Fulani empire. And it is the only large village left in the entire eastern part of Diffa, along with Bosso and Nguigmi.

The people have not developed a mechanism for armed resistance. But if they remain despite fear, threats or ongoing kidnappings, it is due to community leaders who convey the importance of their ancestral land and ask the people to stop and resist.

The terrorist attack took place in the middle of Niger’s election period. Regional and municipal elections took place on 13 December.

“It’s strategic,” says Ibrahim Elh. “The terrorists want to send a strong signal to neighboring countries and the international community to remind them of their presence in the region and show that they can attack and destroy large villages like Toumour.”

On December 27, the people of Niger will go to the polls to elect the next president – because their current president, Mahamadou Issoufou, does not want to run for another term – and vote for the members of the National Assembly. The security situation in the country will be one of the most important issues.