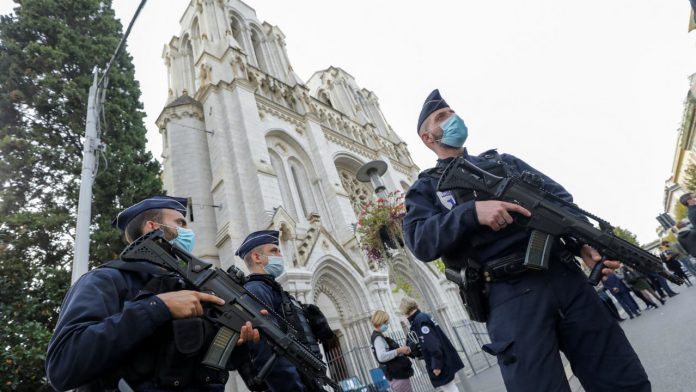 French Prime Minister Jean Castex announced that the country was on emergency alert after three people were killed in the southern city of Nice on Thursday. This is not the first terrorist attack that has coincided with a major religious or national holiday on the French Riviera.

Nice Mayor Christian Estrosi said on Twitter that the knife attack had taken place in the town’s Notre Dame church and that police had detained the attacker.

A police source said three people were confirmed dead, including a woman who was beheaded in the attack. One of the people killed inside the church was considered a church attendant, Estrosi said.

This latest attack is happening at an important time in various religious calendars. The day of the attack on October 29 marks the official birthday of the Prophet Muhammad, and in the Catholic Church, November 1 is known as ‘Toussaint’ or All Saint’s Day.

The Conseil Français du Culte Musulman (French Muslim Council) condemned Thursday’s attacks and called on Muslims to cancel their mawlid celebrations – to mark the birth of the Prophet – as a “sign of grief and solidarity with the victims and their loved ones”.

Thursday’s attack comes as France still needs beheadings earlier this month by French middle school teacher Samuel Paty of a man of Chechen origin who said he would punish Paty for showing students’ cartoons of the Prophet Mohammad in a civic lesson.

Since Pity’s killing, French officials – backed by many ordinary citizens – have once again claimed the right to show the cartoons, and the images have been disseminated by marches in solidarity with the slain teacher.

This has given rise to outbursts of anger in parts of the Muslim world, including calls for a boycott of French products, with some governments accusing French President Emmanuel Macron of pursuing an anti-Islam agenda. Protesters have condemned France in street meetings in several Muslim-majority countries.

Nice is known as a holiday center popular with both French and international tourists. On July 14, 2016, thousands of people gathered to watch Nice fireworks to celebrate Bastille Day, France’s national holiday, as a Tunisian citizen deliberately drove a truck through the crowd.

About 86 people were killed and more than 400 were injured, while thousands more are still trying to deal with the trauma from what they experienced four years later.

The wealthy city on the French Riviera has gradually gained an unhappy reputation as a breeding ground for aspiring jihadists.

There is little information on terrorist attacks that has been thwarted by French security and intelligence agencies, but one exception is a bomb plot aimed at the Nice Carnival in 2014.

A document from the Directorate-General for Internal Security (DGSI), France’s domestic intelligence agency, said Ibrahim Boudina, a young Frenchman born in Algeria, planned to detonate bombs during the event, which attracts hundreds of thousands of visitors each year.

Nice again made headlines in connection with radical Islam later in 2014, when it was reported that an entire family, a total of 11 people, had traveled from there to Syria. The family’s eldest son had reportedly been on intelligence radar for two years because of his radical religious views.

Recently, Nice has been linked to one of France’s most prominent jihadists, Omar Diaby, whose Senegalese family moved to Nice when he was five years old.

Diaby, better known as Oman Omsen, is known in counter-terrorism circles as one of the most productive recruiters of foreign fighters in Syria and boasts of recruiting over 80 French citizens for jihadist cause.

He was allegedly killed in August 2015, but in a wide-ranging documentary aired on French television in June 2016, he revealed that he had staged his own death to avert detection while receiving medical treatment outside Syria.

A member of the Al Nusra jihadist group, Diaby, has expressed differences with the more prominent Islamic State (IS) group, but in the documentary he expressed his approval of the January and November 2015 attacks in and around Paris.

Diaby was last arrested on August 31 in northwestern Syria.

Nice has long struggled with racism. Estrosi itself has questioned the right of those born in France to receive automatic citizenship. He has called Muslims a “fifth column” and described some immigrants as French “only on paper”.

Estrosi built a reputation for being tough on crime and made the city one of the most advanced in France in terms of security. Nice has the highest proportion of surveillance cameras in all of France.

In terms of prevention, the city has established its own team of lawyers, psychologists and social workers aimed at deterring young people from leaving the country to conduct jihad abroad. Nice also has one of France’s few existing programs to help returning jihadists re-integrate into society.