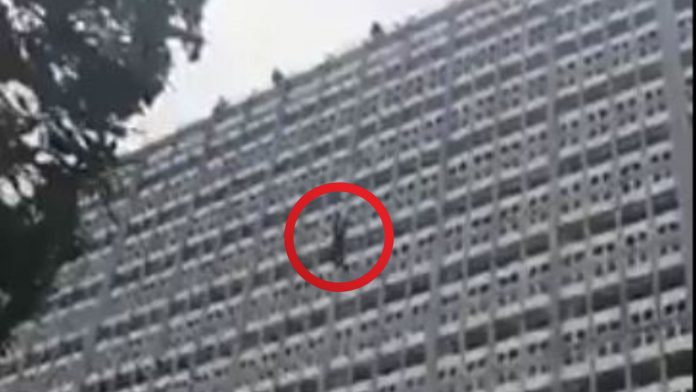 In a desperate attempt to make their voices heard, employees who say they have been unpaid for six months threw a mannequin from the roof of the El Hana International Hotel in Tunis on 3 December. It shocked passers-by below, who thought it was a real suicide. The man who threw the mannequin from the roof told France 24 observers that he thought the protest was shocking because it was the only way to raise awareness of the situation of employees.

Authorities turned off the hotel’s electricity in early November because it had outstanding bills. Since then, the hotel has been virtually empty of guests, but employees have gathered every day to call for a six-month refund, as well as the social security they say their employer owes.

The employees, represented by the General Union of Tunisian Workers (UGTT), have so far not been able to reach an agreement with the hotel’s owner, businessman Raouf Mhenni, who is facing serious financial difficulties.

In videos of the incident posted on Facebook, passers-by can be heard screaming as others run into the building to try to help what they thought was a person who just landed on the roof of the first floor of the reception.

This video shows an employee picking up the mannequin that landed on the first floor of the building.

Hafid (not his real name) is the man who threw the mannequin from the ceiling. We have changed our name to protect his identity. He works for El Hana Hotel and is the father of a small child.

“I am aware that I committed an illegal act”

I have worked at this hotel for several years. Even with my experience, my salary is modest and amounts to less than 600 dinars per month [Editor’s note: 182 euros], without the benefit of any form of social security. For the past two months, electricity at the hotel has been cut off because they did not pay a bill of 120,000 dinars [Editor’s note: 35,000 euros].

We reached the Tunisian government as well as the president’s office in vain.

The 116 hotel employees cannot support their families. For the past three days I have been sleeping on a sofa in the hotel. I do not want to go home without getting the money I need to feed my little baby. I told myself that I needed to find some kind of powerful action so that people would understand our frustration. I suggested the idea of ​​throwing a mannequin from the building to the union members at UGTT and they were immediately ready for it.

I’m aware that this act is not legal, but I thought it could really give the electric shock that would bring people to our suffering.

El Hana International Hotel, which is heavily in debt and suffering from terrible management, has almost gone bankrupt several times in recent years. In 2016, the facility was placed under the responsibility of a legal administrator until January 2017.

The France 24 Observers team tried to contact the owner Raouf Mhenni. We will update this page if he answers.

Video of the incident also deceived many people online. Tunisian Facebook users shared the post, saying it was a real person who threw himself from the building. “Emergency, an employee of El Hana International Hotel killed himself,” wrote one social media user.