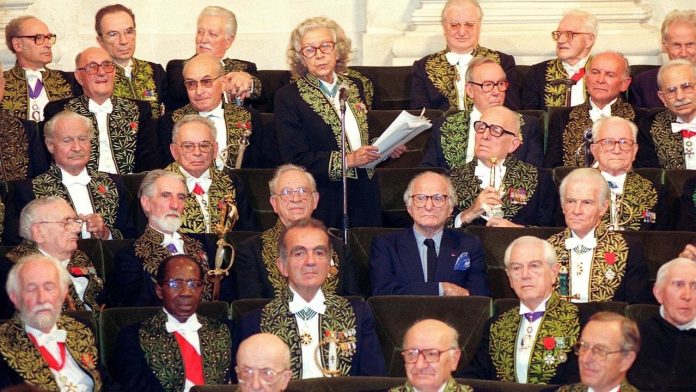 Opponents of gender-neutral writing have opened a new chapter in their struggle to leave the French language “uncorrupted”. But experts say their rearguard is neither supported by history nor suitable for the present.

After stirring up heated debates about “Islam-left” at universities and meat-free meals in school canteens, France’s ruling party has fallen back on another célèbre thing in the Conservative camp: defending a status quo in the French language that is unmistakably sexist. .

On Wednesday, lawmakers from the ruling LREM party and the opposition Les Républicains presented a bill calling for a ban on the use of gender-neutral text – known as “inclusive writing” – among government officials and officials.

The move comes three years after a government memo warned ministers against using écriture inclusive, which Académie française, France’s overwhelmingly male-dominated language watchdog, had previously based as an “aberration” that puts the language in “deadly danger”.

LREM legislator François Jolivet defended his proposed bill, deploring a form of linguistic “activism” that “in no way promotes the legitimate cause” of gender equality. Instead, he argued that gender-neutral writing would only make the language more difficult to learn.

As amused critics were quick to point out, Jolivet soon became guilty of the sin he preached against and wrote on Twitter that he had no problem with the traditional greeting phrase “Chères collègues, chers collègues” (dear colleagues) – in itself a basic form of inclusive language.

Eliane Viennot, a historian and professor of literature at Jean-Monnet University in Saint-Etienne, said the legislator’s contradictions were a sign of an often ill – informed debate, largely influenced by what she described as’ conservatives clinging to a bastion of male dominance ”.

“We get the idea that language rules are sacred and that feminists are undermining our culture,” Viennot said in an interview with FRANCE 24. “It’s the kind of conversation that evokes emotional responses but simply fails scrutiny.”

As Viennot pointed out, General Charles de Gaulle, the former president and resistance hero so often invoked by French conservatives, was himself an unlikely proponent of inclusive writing and praised the public with his trademark “Françaises, Français”.

The first French president to be elected by universal suffrage, De Gaulle, had every reason to recognize his female voters. For this he often made reasons of members of the Académie, who emphasized that he only needs to say “Français” to include both women and men.

According to French rules, all pronouns, nouns and adjectives have gender for the object or person they are referring to. There is no gender-neutral pronoun like “they” and the masculine form is considered dominant in the majority. Thus, ten French women make up a group of French. but add only one man, and they will be French.

To get around the obvious bias, proponents of inclusive writing advocate using both words, as De Gaulle did, or seeking gender-neutral alternatives, such as “la population française” (the French public). Another option is to use median points or “middots” – a floating point in my word – to include both gender forms, as in French.

Not surprisingly, it is the latter option that has raised the most eyebrows, with critics rounding off a grammatical ploy considered “ugly”, “ridiculous” and “barbaric”.

Despite the hassle, Viennot points out that similar contractions have long been common in French paperwork, especially identity cards, which use the form “Né (e)” – for births – to enter their date of birth.

“Critics obsessed with an acronym – the median – that feminists did not even invent,” she argued. “The feminist contribution is to have looked for a more appropriate sign, because the use of parentheses gives a lesser degree of significance.”

Viennot says that median points offer a suitable alternative to parentheses: derived from ancient Greek, they carry no particular connotation in French. She notes that other aspects of inclusive writing that are now widely accepted were once equally divisive.

In the 1980s, there was strong opposition to attempts to feminize certain professions, for example by saying “Madame la présidente” instead of “Madame le président” or “la chirurgienne” (the surgeon) instead of “le chirurgien”. As recently as 2014, a Conservative lawmaker caused a stir in parliament by refusing to speak to his female counterpart in feminine form. True to form, Académie was the last to capitulate, more than three decades later, in 2019.

“Today, feminized job titles are largely accepted, although there are still people who think they can have no words,” says Viennot. By accepting the change, Académie only agreed to restore the language spoken centuries ago, she argued, noting that much of the inclusive writing that was considered so bizarre today existed in early modern times.

Thus, it was not uncommon in the 14th century for verbs to correspond to feminine nouns rather than masculine if the former were closest. You can write “les garçons et les filles sont arrivées” (boys and girls have come), as opposed to the masculine “arrivés” that are now taught in schools.

“From the 17th century onwards, such methods were gradually phased out when male forms became mandatory,” Viennot explained. “Female terms such as ‘doctoresse’ and ‘philosopheuse’ were banned because the professions became man’s only preservation.”

>> ‘A woman’: The Wikipedia page records trials and achievements for invisible women

Instead of feminine forms, Académie decided that the masculine would in some way also be considered neutral – a practice that its 736 members, including a total of 10 women, have defended since then.

In a 2017 memo to cabinet colleagues, former Prime Minister Édouard Philippe claimed that the “masculine [form] is a neutral form that should be used for terms that can be applied to women ”. But it is not “neutral”. In fact, many studies have shown that the French language in its current form only increases gender inequalities.

In an article published on The Conversation, a group of French linguists provided sufficient evidence that women are discouraged from using only masculine forms. Conversely, it has been proven that the use of inclusive writing increases women’s confidence in applying for jobs or pursuing studies in a particular area.

The same article suggested that there is no evidence to support claims of a negative effect on readers’ ability to understand texts using inclusive writing, although the authors called for more studies on the specific use of median scores.

Gwenaëlle Perrier, a researcher at the University of Paris 13 who specializes in politics, language and gender, says that school children are generally comfortable with basic forms of inclusive writing, such as feminized nouns. She has also found that university students are susceptible to certain neologisms that have been ridiculed, such as the term “iel” (a contraction of the French terms for “he” and “she”).

“New words are often surprising and shocking, as are the feminized forms of work just a few decades ago,” she said in an interview with FRANCE 24. “But evidence shows that words and other habits are easily used when they are useful and emotional. . “

If critics of inclusive writing were really interested in discussing pedagogical issues, Perrier argued, they would address some of the more impenetrable – and frankly meaningless – rules of French grammar, rather than mock attempts to make the language more in pace with society.

In fact, inclusive writing is in many ways simpler and more logical than many existing rules, she pointed out, adding: “It really makes sense to students than considering masculine.”

The proliferation of words such as “iel” and “toustes” (a contraction of the masculine and feminine terms for “everything”) signals a new horizon in inclusive writing, one that goes beyond the original effort to feminize the French language.

“Such words serve both a political purpose, which opens up for transgender people and non-binary representations, and a practical one, for example in neutral terms when a person’s identity is not known,” Perrier said.

Just how far gender-neutral writing should go to address these issues and what innovations should be adopted is the subject of intense debate among proponents of inclusive writing – a debate welcomed by many linguists in France.

The debate touches on a number of practical aspects, including whether feminine and masculine forms should have a certain order – for example, to write “étudiantes, étudiants” (students) but “Français, Françaises” based on alphabetical order rather than the patronizing bravery adopted by De Gaulle – or ordered at random.

Perrier says she is not surprised to hear critics argue that other struggles should be prioritized, such as the fight against gender-based violence and economic inequality. However, she counteracts, “the performance of language no longer needs to be proven.”

She pointed to a frequently cited survey, in which students toured the city of Lyon and asked the public to solve the following riddle: “A man is killed in a car accident and his injured son is taken to hospital. When I entered the emergency room, the hospital’s best surgeon gasped and exclaimed: “I can not treat my own son.” How is this possible? “

Astonished spectators offered a reasonable answer that the injured son had two fathers. Some suggested “smile surgery” could be a stepfather or even the mother’s lover. Educated, just like previous generations, on the grammatical premise that “the masculine has precedence”, came with the most obvious answer that the surgeon was the mother.