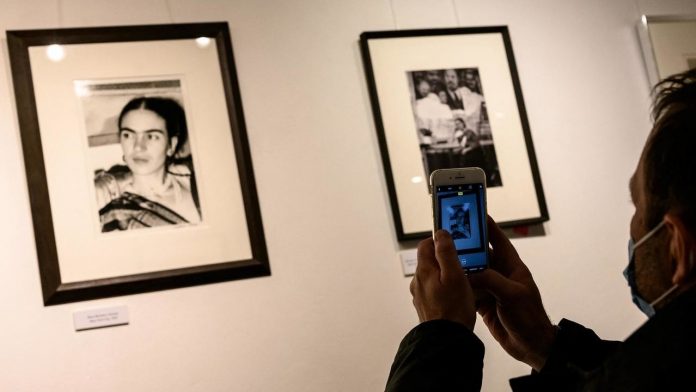 Saved by the shutdown orders imposed on other cultural sites, French art galleries have seen a record number of visitors over the past three months and have come to symbolize the last bastion in a pre-pandemic world. For professional artists, more customers is a welcome relief for a sector that has been hit hard by the health crisis and is uncertain about its future.

It is almost 11 o’clock on a Saturday morning and already about 30 people are waiting outside the Galleria Continua in Paris. Recently inaugurated by the famous French street artist known as JR, this 800 square meter food gallery has become the new cultural space that everyone is talking about. Its concept is both innovative and visually striking: Half art gallery and half delicacy, visitors can enjoy pecorino with truffles along with a sculpture by Anish Kapoor or a drawing by Kiki Smith.

“There are no theaters, no cinemas, no museums – and there will come a time when Netflix is ​​not enough,” said Joël, a student determined to lose the queue that stretches to rue du Temple in the heart of the Marais. many of the capital’s art galleries.

The Polka Gallery, which opened its doors in 2007, is among them. Named after a photo magazine, it currently shows the work of Marc Riboud, a photographer known worldwide for his work in Asia. The exhibition “Chine (s)” contains about 40 images taken between 1957 and 2010 that transport viewers from cities pulsating with energy to mysterious landscapes with misty mountains.

“It feels like traveling with the photographer, the pictures are magnificent, they make you dream,” enthusiastic Hélène, who arrived as soon as the exhibition opened.

Sidonie Gaychet, the gallery’s deputy director, stated that the gallery is livelier than ever. “But above all, we see another audience, an audience that is not used to coming to a gallery. Some people are looking for the souvenir shop or asking if it costs an entrance. We explain our job: to help them discover artists. Who maybe one day it will end up in the museum’s collections. “

But while more people visit art galleries, it has not led to more sales. At Polka, sales fell by 50 percent in 2020. A recent study commissioned by the Professional Committee of Art Galleries (CPGA) shows that 78 percent of galleries saw their sales decline last year.

Despite this, very few galleries have been forced out of operation and the dreaded scenario of mass closure has not yet occurred. “Government support keeps most galleries afloat. It is when support declines in 2021 and 2022 that the real situation will become clear,” warns Géraldine de Spéville, CPGA’s general delegate.

For galleries, the cascading cancellations of international fairs such as Paris Photo, Art Basel and the International Contemporary Art Fair represent a huge loss of revenue. Art professionals eagerly await these events every year as they get to meet collectors from all over the world in the same place and at the same time.

“The resumption of art fairs will be important,” says de Spéville. “We hope that it will coincide with the reopening of borders and the arrival of foreign collectors. At the moment, the galleries have to compete for the same domestic clientele, and this is starting to get difficult.”

To keep in touch with foreign collectors at a distance, galleries have had to adapt. Polka has launched podcasts about their artists and 3D virtual tours on their website.

“People like it, but it does not replace seeing works in real life,” says Gaychet.

“There is a convincing pleasure to see works that you do not really get with digital. Collectors like to hear the stories of the works, anecdotes about the artists. We can not have the special connection right now.”

Towards a reopening of museums

Calls for the resumption of art centers have increased in recent weeks, encouraged by the relative stability of the Covid-19 situation across the country. The President of the Palais de Tokyo, Emma Lavigne, launched a petition that attracted 10,000 signatures in support of the museum’s resumption and promised to “welcome our visitors in enhanced security”.

Several other elected officials have taken up the fight to reopen museums. In Issoudun, Socialist Mayor André Laignel announced on Friday that he would open the doors to the Hospice Saint Roch Museum only for private visits, despite judicial authorities. The controversial move follows Perpignan Mayor Louis Aliot, deputy leader of the far-right National Rally Party (formerly the National Front), which had also decided to resume four municipal museums in a decision that went against the courts.

Other cities, such as Strasbourg and Beauvais, have lobbied the Ministry of Culture to set up “test visits” based on the model of “test concerts” scheduled to take place in March and April.

But there is no sign yet that the government, which has kept museums closed since October 30, intends to change thanks.

Minister of Culture Roselyne Bachelot has promised that museums and national monuments would be the first cultural sites to reopen, but only when the level of infection drops.

Meanwhile, works by David Hockney, Lucienne Bloch and Christian Boltanski can be seen free of charge in Parisian galleries, the last remnants of a cultural world upset by the pandemic.