Home NEWS With no official result, both sides claim victory in the election to...
Facebook
Twitter
WhatsApp
Linkedin
LINE 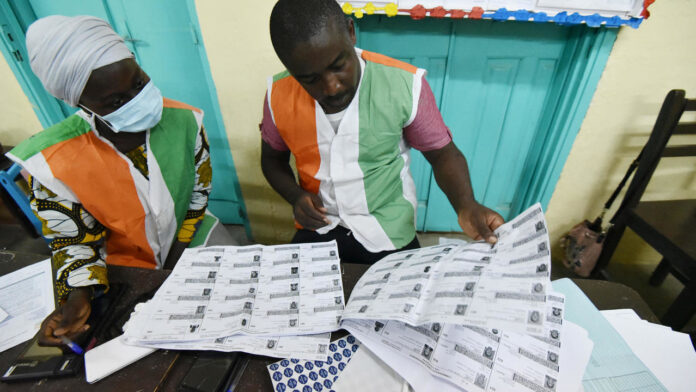 Ivory Coast’s ruling party and the main opposition both claimed victory on Sunday in the West African nation’s legislative election, with the results yet to be announced.

Saturday’s polls are a key test of stability after violence before and after the October vote, which claimed 87 lives in the former French colony.

Adama Bictogo, number two in the ruling RHDP party, said that early trends from local election commissions “clearly show that our party will win by a comfortable majority”.

“We have achieved our goal of securing about 60 percent of the seats,” he explained.

But the opposition center-right-wing Democratic Party (PDCI) has also claimed to have won the vote, claiming that the preliminary results were full of irregularities.

Top opposition party official Niamkey Koffi told a news conference in the economic capital of Abidjan that the PDCI believed it had won “about 128 seats with our allies” in the 255-seat National Assembly.

“Our concern is that the results could be manipulated,” Koffi said, warning the government against “any attempt to falsify” them.

The conflicting demands for victory came after the Independent Electoral Commission announced early preliminary results, which Koffi said were “strewn with fraud, manipulation and manipulation”.

Koffi claimed attempts to turn results around in several major cities including the political capital Yamassoukrou, the coastal town of Grand-Bassam and key districts of Abidjan.

Turnout had been only 20 percent, he added, citing “fear of violence”.

Bictogo, for his part, denied the opposition’s allegations of fraud.

“This is the reasoning of reasoning,” he said.

The PDCI had, in an unprecedented move, formed an electoral alliance with the center-left coalition Together for Democracy and Solidarity (EDS), whose driving force is former President Laurent Gbagbo’s Ivorian Popular Front (FPI).

Their stated goal is to prevent President Alassane Ouattara and his RHDP party from “consolidating absolute power” in the world’s foremost cocoa grower, formerly an oasis of peace and prosperity in troubled West Africa.

Ouattara, 79, won a controversial third term with more than 94 percent of the vote in the presidential election, which was boycotted by the opposition.

In the most recent legislative vote in December 2016, the RHDP and the PDCI were allies and won an absolute majority with 167 seats at 34 percent.

For its part, the FPI took up a decade-long boycott of election politics to participate in Saturday’s vote, in which more than 1,500 candidates competed for the votes of about seven million people.

Abidjan’s mayor Sylvestre Emmou, an opposition candidate, said three people had been stabbed and injured in the city on an otherwise quiet polling day. Election observers did not report any other major incidents.

Ouattara forced Gbagbo out of office in 2011 following a post-election civil war that claimed some 3,000 lives and left the country deeply divided.

After his shooting, Gbagbo, now 75, was flown to the International Criminal Court in The Hague to face charges of war crimes stemming from the conflict.

He was acquitted in January 2019 and now lives in Brussels pending the outcome of an appeal.

More recently, Ouattara has reached out to his old enemy and in an attempt at “national reconciliation” Gbagbo has issued two passports, one of them a diplomatic passport.

Gbagbo’s supporters are impatient for his return, which the ex-president recently said would be “soon”.