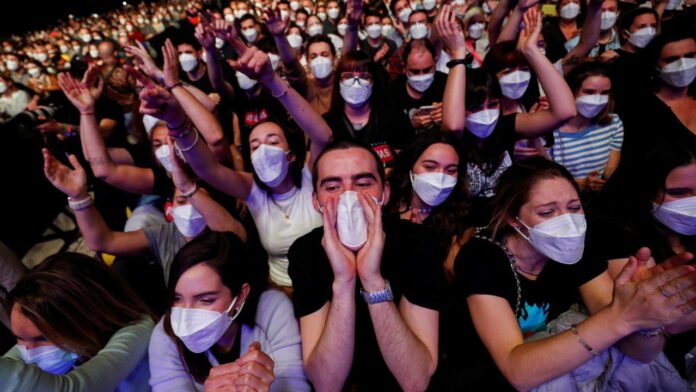 Music fans in Barcelona hugged, danced and sang at a sold-out rock concert on Saturday night after taking quick COVID-19 tests in a trial that could revive the live music industry in Spain and beyond.

About 5,000 fans on the show for the Spanish indie band Love of Lesbian had to wear masks, but social distancing was not required in the Palau Sant Jordi arena.

“It was spectacular. We felt safe all the time. We were in the front row and it was something we had missed a lot,” said publicist Salvador, 29, after the show. “We are very proud to have had the chance to take part in this. We hope it will be the first of many.”

In surreal scenes after a year of social distancing, the fans danced close to each other, but the face covered in masks showed that things were not completely normal.

Health checks at the entrance delayed the start of the concert but could not dampen the party spirit.

“Welcome to one of the most exciting concerts in our lives!” singer Santi Balmes told the audience to a jubilant cheer.

The government-approved concert served as a test of whether similar events will be able to restart.

“It will be safer to be in Palau Sant Jordi than to walk the streets,” concert organizer Jordi Herreruela told Reuters earlier on Saturday.

Tests before the concert at three venues in Barcelona were performed by 80 nurses who had full personal protective equipment. Some people were forced when nurses lost their noses.

By noon, three of the 2,400 people who had already been examined had tested positive and one had come into contact with a positive case, says Dr. Josep Maria Libre, a doctor who supervised the testing. They could not attend the concert and would receive a refund.

Participants received their antigen test results in 10 to 15 minutes via an app on their phones. The test and a mask were included in the ticket price.

“I think today we have made one thing a reality which is to show the world that culture is safe,” said Ramon, a 49-year-old fan.