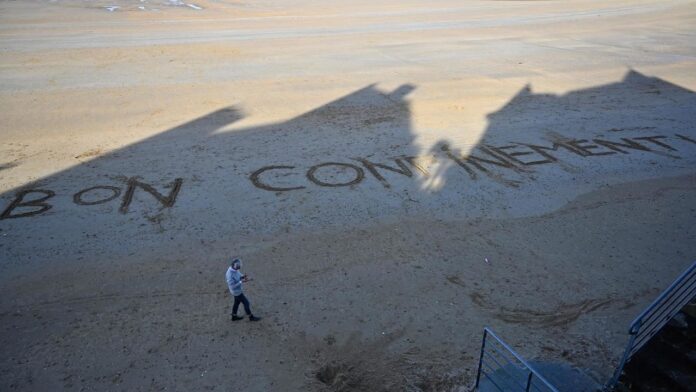 One year ago on Wednesday, millions of lives were turned upside down when French President Emmanuel Macron announced a nationwide lockdown that would take effect at noon on March 17, 2020 and end almost two months later on May 10. Jowhartakes a look at some of the images from this unprecedented public health measure that tested the country’s resilience.

At noon on March 17, 2020, France went into suspended animation, beginning with a strict nationwide lockdown (locally known as the containment) that lasted for about 55 days. Here are 10 pictures from an unprecedented period when French residents experienced life like never before.

France is once again at “war”, President Emmanuel Macron announced in a solemn televised address to the nation on March 16, 2020. With Covid-19 cases rising and the number of deaths increasing, France would enter a nationwide lockdown. Macron did not mock his words: France is not fighting “against any army or against any other nation,” he said. “But the enemy is there, invisible, elusive, forward.” The president then announced what many guessed would come: the introduction of a lockdown. The measure would take effect at noon the next day, the president told a troubled population who were about to begin an unprecedented chapter in their lives.

The day after Macron’s announcement, France’s then Interior Minister Christophe Castaner presented the new lock-in measures: Those leaving the home must have an official form noting the reason for venturing outside; Criminals without a form would be fined 135 euros and around 100,000 police officers were deployed nationwide to ensure compliance. The government’s lock motto was a concise “Stay at home”.

A policewoman checks documents from a cyclist in front of the Eiffel Tower in Paris on March 18, 2020. © Ludovic Marin, AFP

Before the measures took effect at noon on March 17, many city dwellers hit the road or rushed to train stations to wait for the lock under relatively privileged pastoral conditions – many travel across the country despite government recommendations to stay away from spreading the virus. According to a study conducted by Orange mobile operator based on subscriber data, 17 percent of metropolitan residents in Paris left the area between March 13 and March 20.

Crowds at the Montparnasse train station in Paris on March 17, 2020, a few hours before the lock came into force. © Thomas Sanson, AFP

Overnight, France’s bustling cities were transformed into ghost towns. Lively village and town squares also looked deserted and deserted. Photographs of Paris – emptied of its customers, commuters, café masters and motorists – revealed a city that looked like a still from an apocalypse movie. From the river Seine to the Place de la République and the Champs-Élysées, both professional and amateur photographers immortalized the French capital in a state of surreal emptiness.

The new blocking measures changed the way a country that is often resistant to change does business. The public health situation saw many French people who had little or no previous experience of working from home and adapting to virtual meetings, silent buttons and cameras. The first shutdown in the spring of 2020 threw a quarter of France’s working population into a work environment that many had not imagined at the beginning of the year. For some, it turned out to be a gift from God; for others, the forced isolation was a stress reliever.

For parents working from home, the closure of schools and universities added further complications to already limited lives. The secret of homeschooling forced parents and teachers to improvise – with varying degrees of success – into virtual lessons. Like elsewhere, the lock also accentuated existing social inequalities. Some students dropped out, but overall, studies show that teachers and students adapted well to the new form of teaching. A study by the French Ministry of Education’s statistics service, published on July 22, 2020, showed that 77 percent of primary school teachers and 68 percent of high school teachers thought that their students learned “satisfactorily” during the suspension period.

A run on pasta and toilet paper

In the face of an exceptional situation, some people panicked and stockpiled on non-perishable foods. Pasta, rice, preserves, toilet paper and soap flew off the shelves in the supermarket. Lines outside wine shops and “tabacs” selling cigarettes became a measure of how French life was spent behind closed doors.

A man examines empty shelves in the toilet paper section of a supermarket in eastern France on March 16, 2020. © Sebastien Bozon, AFP

The competition for PCR tests

Tests were strongly encouraged for anyone who suspected they had come in contact with someone suffering from Covid-19. Due to high demand, the availability of test facilities and kits for Polymerase Chain Reaction (PCR) proved insufficient. Once again, lines were twisted around clinics, forcing health authorities to set up temporary test centers near train stations. Buses crossing the countryside were also converted into mobile test centers.

A man has a PCR test fat in a medical laboratory in Paris. © Christophe Archambault, AFP

Healthcare professionals, at the forefront of the fight against the Covid-19 pandemic, were sharply stopped every night by people being dragged to their windows at 8 p.m. As in other countries, the applause in France created new bonds from windows, balconies and gardens when neighbors honored the new heroes of the pandemic.

Residents of a building show their support for medical staff in Saint-Mande, a suburb of Paris, on May 4, 2020. © Martin Bureau, AFP

On May 10, 2020, the French regained the right to leave their homes after almost two months of imprisonment. The students went back to school and shops selling unnecessary things had to be resumed. But many restrictions remained. However, the precautionary measures did not prevent a second shutdown (reconstruction) from 28 October to 15 December. One year later, despite encouraging signs of vaccinations, France is facing an increase in Covid-19 cases and the prospect of a third lock-in.

France emerges from its first coronavirus lock-in on May 11, 2020. © Christophe Archambault, AFP