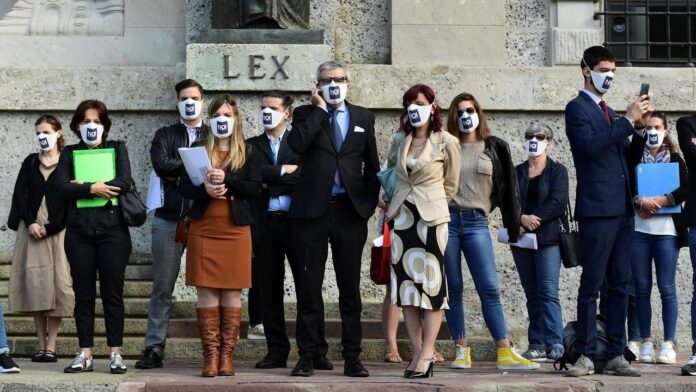 Pictures of army cars transporting stacked coffins from the Italian city of Bergamo last year provided shocking evidence of the horrors of the coronavirus. A year later, the memories are still raw.

At the height of the pandemic last year, Father Marco Bergamelli’s coffins blessed every ten minutes in this city in northern Italy.

“This place was full of coffins, there were 132 lined up at the foot of the altar,” he said, opening the doors to the church at the AFP monumental cemetery.

“In the beginning, the trucks came at night, no one would know that the coffins were being carried elsewhere.”

The camouflaged cars removed up to 70 coffins a day from the church, where they were collected after the local homes were filled. The coffins were transported to cemeteries in other northern cities such as Bologna and Ferrara.

The endless flood of victims has forced the city of Bergamo to send bodies to less crowded crematoria, sometimes hundreds of kilometers away. © Piero Cruciatti, AFP

Many of the bodies that remained in Bergamo were buried in a hurry, often without tombstones but with signs with pictures and names of the deceased.

“People saw their loved ones leave in an ambulance with a fever, and they were returned as ashes in an urn, without ever being able to say goodbye,” says Bergamelli, 66.

>> “Never give up”: volunteers take up hospitals and alcohol in Italy’s virus – infested Bergamo

Prime Minister Mario Draghi will visit Bergamo on Thursday to mourn the victims of the coronavirus pandemic, which has killed more than 100,000 people in Italy, according to official statistics.

But a gloomy sense of deja vu permeates the area, as the city is once again locked down along with most of the country in the midst of a new wave of infections.

At Seriate Hospital east of the city, the intensive care unit once again has capacity and its eight beds are occupied by coronavirus patients, although the number is lower than last year.

“Covid is more aggressive now, with many cases of the new English variant,” said Roberto Keim, head of the unit.

There are many here who criticize the authorities for acting too slowly to acknowledge the scale of the crisis last year and not to impose rapid restrictions to stop the spread of the virus, including banning gatherings.

“In early March, we saw people go to funerals for victims of Covid and die themselves a few weeks later,” said Roberta Caprini of Generli Funeral Home.

The 38-year-old was left to handle an unsurpassed demand for the family business after her father and uncle both got coronavirus. They recovered later.

To let quarantined relatives say their last goodbyes, Caprini had the lift truck pass under his balconies and took pictures of the dead himself.

But the right grief was impossible for many.

“We spent a month without knowing where my father’s body was,” says Luca Fusco, recalling the 85-year-old’s death in a nursing home on March 11, 2020.

The local newspaper L’Eco di Bergamo published about ten pages of obituaries every day at the height of the pandemic. © Flavio Lo Scalzo, Reuters

Fusco’s son Stefano created a Facebook group that demanded justice for the dead, which now has 70,000 members.

The “Noi Denunceremo” group (We will condemn), led by Luca Fusco, has already lodged more than 250 complaints with prosecutors about how the authorities handled the Covid crisis. A legal investigation is ongoing.

It took two weeks after the first cases appeared in the province on February 23 last year for the authorities to lock up the entire Lombardy region, a measure which extended a day later to the whole of Italy.

Fusco claims that no one wanted to shut down a region that is the engine of Italy’s economy.

“Bergamo’s people felt abandoned. By acting earlier, the authorities could have saved thousands of lives,” he said.