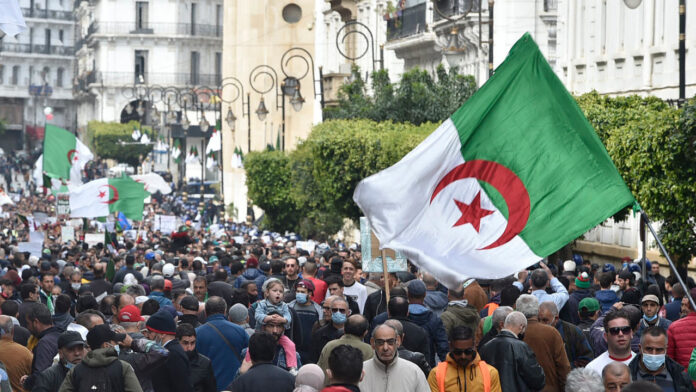 Thousands protested in Algiers on Friday demanding freedom of the press and legal independence, as Hirak’s pro-democracy movement continues its weekly demonstrations despite a ban on rallies over the coronavirus pandemic

Hirak’s protest movement was triggered in February 2019 over then – President Abdelaziz Bouteflika’s bid for a fifth term.

The sick strongman was forced to leave weeks later, but Hirak continued with demonstrations and demanded a comprehensive overhaul of a ruling system in place since Algeria’s independence from France in 1962.

“Freedom means expressing myself how I want and not how you want,” a poster was read on Friday.

Press Freedom Watchdog Journalists Without Borders (RSF) ranked Algeria 146 out of 180 countries and territories in its World Press Freedom Index 2020, down 27 places from 2015.

Several journalists were attacked during the demonstration a week earlier, and Algerian authorities have threatened to permanently withdraw the international accreditation of the international broadcaster FRANCE 24.

“Nothing justifies attacking a journalist or any other person,” said Ali, a retired teacher in his sixties who refused to give his last name.

He told AFP that he hoped for “free, professional and above all objective and impartial pressure”.

Since the movement’s second anniversary on February 22, thousands have taken to the streets for weekly protests, which had been interrupted for almost a year due to the coronavirus pandemic.

Friday’s demonstration came when Algeria marked the anniversary of March 19, 1962, a ceasefire that ended its independent war from France.

Tebboune has reached out to the protest movement while trying to neutralize it.

“No elections with the mafia team (in power)”, protesters chanted.