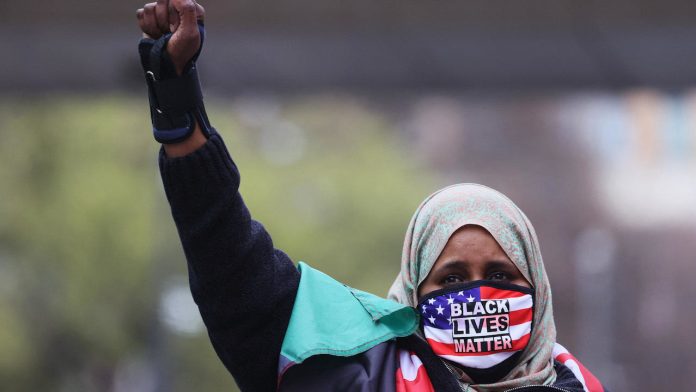 Politicians, rights activists and family members and even world leaders reacted with cheers and relief on Tuesday when the fired Minneapolis police officer Derek Chauvin was convicted of the murder of George Floyd, a black man who died when the official knelt for more than nine minutes last year.

Biden welcomed the verdict, saying Floyd’s death was “a murder in broad daylight, and it tore away the blinds of the whole world” to see systemic racism.

But he warned: “It is not enough. We can not stay here. We will deliver real change and reform. We can and we must do more to reduce the likelihood that tragedies like this will ever happen again. ”

“This is a day of justice in America. History will look back right now, said Kamala Harris, America’s first black vice president, in a conversation with Floyd’s family earlier on Tuesday.

“I feel tears of joy, so emotional that no family in history has ever come this far. We could get a guilty verdict on all counts. We got a chance to go to trial and we took it all the way. This is for everyone who has been in this situation. Everyone. “—Floyd’s brother, Rodney Floyd

“GUILTY! Painful deserved justice has finally come for George Floyd’s family. This verdict is a turning point in history and sends a clear message about the need for responsibility for law enforcement. Justice for Black America is justice for the whole of America!” —Floyd family lawyer Ben Crump

“George Floyd’s family and society deserved his killer to be held accountable. Today they were given that responsibility. “—The First Lady of the Time and Former United States Secretary of State Hillary Clinton

“I am grateful to George Floyd’s family that justice was served. America was changed forever by the video of Derek Chauvin killing George Floyd. However, a guilty verdict does not mean that the persistent problem of police crime has been solved. We will continue to work for meaningful change ”—US Senate Majority Leader Chuck Schumer

“That a family had to lose a son, brother and father; that a teenage girl had to film and stage a murder, that millions across the country had to organize and march just so that George Floyd could be seen and valued is not fair. And this ruling is not a substitute for political change. “—US Congresswoman and Democratic rising star Alexandria Ocasio-Cortez

Today’s ruling is an important step forward for justice in Minnesota. The trial is over but our work has only just begun. Minnesota Governor Tim Walz

“Chauvin may never see the light of freedom again. That would be right. But that would not be enough. THE SYSTEM that allows him to murder George Floyd must be changed. But for a spectator’s iPhone camera, Chauvin had escaped with murder! ”—Harvard Law Professor Laurence Tribe

“While today’s verdict is a step forward in the fight for police responsibility and can help heal a sad society, the systems that made it possible for a police officer to murder Mr. Floyd and tore him away from his family and the communities that loved him so much remain completely intact. ”- American Civil Liberties Union.

“Right now I’m thinking of George Floyd, his family and those who knew him. I hope that this verdict gives them a certain comfort and for all who can not help but see themselves in his story. We stand in solidarity with you and know that this is part of a larger fight against racism and injustice. ”—Facebook founder and CEO Mark Zuckerberg

“I was shocked by George Floyd’s death and welcome this verdict. My thoughts tonight are with George Floyd’s family and friends. ”—British Prime Minister Boris Johnson