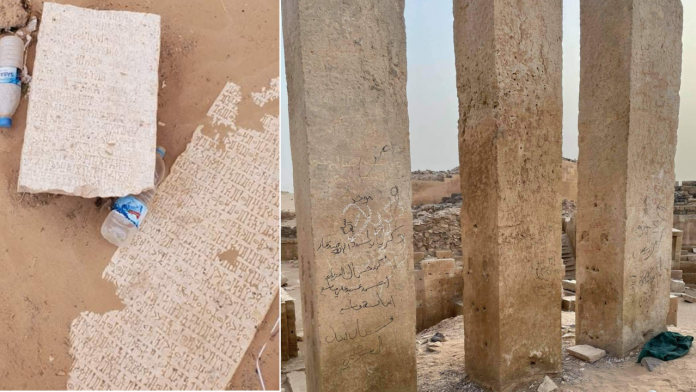 Archaeological sites destroyed and monuments destroyed: The war that has raged in Yemen since 2014 has had a major impact on the country’s cultural heritage, which is considered the cradle of many ancient civilizations. The Temple of Awwam – one of the most important monuments of the ancient kingdom of Saba – now stands abandoned and at the mercy of looters.

Collateral damage from the conflict between Houthi rebels and the Yemeni government, several important archaeological sites have been partially or completely destroyed. A study published in France in 2017 by a research collective identified about fifty historic sites damaged by the crossfire, including the Yemeni capital of Sanaa (whose old town district is classified as a UNESCO World Heritage Site), the ancient ruins of Sirwah and several museums and old mosques.

The study mainly attributes damage to these sites to airstrikes carried out by the Saudi-led coalition against the Houthis.

The Awwam Temple, near the town of Marib, about 120 km east of Sanaa, was spared from destruction during the fighting. However, the ancient site was left unattended during the conflict, making it a target for looting and desecration. Salah M. Ishmael, a young professional from the Marib region with a passion for archaeology, has taken to social media to appeal to young people in the area to clean up and maintain the monument.

‘The site is not guarded, the stones are not protected’

The Temple of Awwam, also known as the Mahram Bilqis, dates back 3,000 years. The temple is dedicated to Almaqah, the god of the moon, a god of the ancient kingdom of Saba. American researchers began excavating the site as early as 1951. They discovered and studied about 300 plates of Sabaean [Editor’s note: an ancient language of Yemen] inscriptions on it. These stones are extremely important as they document conflicts, trade, peace treaties and foreign relations between Saba and other kingdoms.

But today many of these plates, 3000 years old, are simply thrown on the floor along with plastic bottles. People have smeared ink on the columns with pen and you see litter everywhere. It’s a disaster.

— Salah M. Ishmael 𐩮 (@Salahish) June 2, 2021 This Tweet posted on June 2, reads: “The Awwam Temple is missing everything. No signs, no staff to manage it. prevent people from touching the artifacts.”

The site is not guarded, the stones are not protected by eg Plexiglas or barriers to prevent people from touching the artifacts. Looters often carry out illegal investigations because there are no guards or surveillance cameras.

— Salah M. Ishmael 𐩮 (@Salahish) June 2, 2021 This Tweet posted on June 2 reads: “Some of the damage sustained by the Awwam Temple (Mahram Bilqis) […] This wall was illegally carved to obtain pieces of bronze. They probably thought they were gold.” Photo credit: Abdullah al-Badawi.

So I launched a call on Twitter to ask young people, academics and activists to participate in awareness campaigns and cleanups, but also to put pressure on authorities, especially the General Organization of Antiquities and Museums (GOAM), to do something. .

— Salah M. Ishmael 𐩮 (@Salahish) June 2, 2021 This Tweet posted on June 2 reads: “A 12-year-old child acts as the guardian of a 3,000-year-old temple. The most famous and oldest temple in Yemen and the Arabian Peninsula, Awwam. A child, a damaged gate and fence are the only ones protecting Yemen’s most important historical sites.”

— Salah M. Ishmael 𐩮 (@Salahish) June 3, 2021 This Tweet posted on June 3, reads: “Save what can be saved from Awwam Temple. If the local authorities and government are negligent, what about What about citizens’ initiatives? Students: they can organize an awareness campaign and clean-up campaign.”

I also recently created a Facebook group with some friends to collect all the endangered archaeological sites in Yemen, some of which are in much worse states than Awwam, without drawing any attention.

There is the city of Baraqish, the capital of the ancient kingdom of Ma’in – also built 3000 years ago – whose walls were destroyed in a bombardment by the coalition.

The JowharObservers team contacted the General Organization of Antiquities and Museums in Yemen to inquire about the measures taken to protect archaeological sites. We will update this article if we receive a response.

Since the start of the Yemeni civil war in 2014, Houthi rebels have faced the government of Abd-Rabbu Mansour Hadi, who is recognized by the international community and supported by a Saudi Arabia-led military coalition. The war has killed more than 233,000 people and displaced more than a million others.