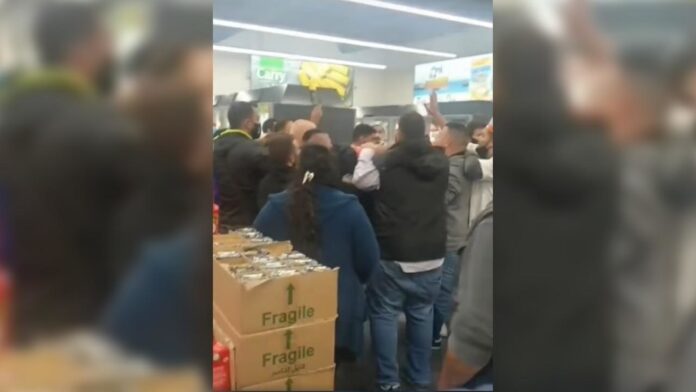 Against an unprecedented economic crisis since the summer of 2019, Lebanon has seen its living conditions deteriorate every day. The prices of basic food have risen and several videos taken earlier in March have shown clashes in supermarkets between customers and also tensions between customers and store managers.

The Lebanese have seen their living conditions deteriorate sharply since an unprecedented economic crisis hit the country in the summer of 2019. The price of essential goods has skyrocketed and a number of videos published online since early March show breakouts among customers, as well as rising tensions between retailers and the general public.

The value of the Lebanese pound took another dive on March 16 and fell below £ 14,000 per dollar for the first time. This new record level comes as a protest weekend in several cities across the country. The depreciation of the Lebanese pound has led to extreme price increases, especially for food.

Several videos showing fights breaking out in supermarkets have been published on social media under the hashtag # لبنان_ليس_بخير (“Lebanon is not feeling well”). The video below shows a fight on March 15 in a Rammal supermarket where customers climb for subsidized bottles of oil and bags of rice.

In recent months, people have been holding weekly protests against the authorities, angry at their inability to quell the economic crisis. On March 13, protesters blocked roads with burning tires, especially in Saïda, in the south of the country, and the Beqaa Valley in eastern Lebanon. They demand a transitional government to end corruption, an investigation into the deadly explosions in the port of Beirut on August 4, 2020 and measures to stop the sinking Lebanese pound.

Customers have been quick to blame retailers, especially supermarket chains, for the rapidly rising prices. They are accused of storing products such as oil, sugar, lentils and rice to sell them at higher prices, says our observer Ahmed Yassine, a blogger in Lebanon.

“Fear of shortage, people stored on products, which only served to contribute to shortage”

The situation is extremely tense throughout the country. Many believe that some large retailers are taking advantage of this crisis and provoking a shortage so that they can sell important goods, including those subsidized by the government, at higher prices.

In May 2020, the Lebanese government began subsidizing the prices of 300 essential goods. A subsidized five-kilo sack of rice costs around £ 12,000, while a subsidized bag of sugar costs £ 12,500. Without subsidies, these products can cost six times as much.

The situation is complicated because people feared shortages stored on products, which only contributed to the same shortage as they feared.

After rumors spread wildly, young people stormed a supermarket owned by the chain Le Charcutier Aoun on Saturday, March 13, in eastern Beirut, and tried to enter the store to see if the store had stored state-subsidized products to sell them at higher prices later.

This video, posted on Facebook on March 13, shows a group of black-clad protesters storming a Le Charcutier Aoun supermarket in a neighborhood in eastern Beirut and trying to gain access to the warehouse.

Since Friday [March 12], it has been almost impossible to find subsidized sugar and oil in food.

Everyone here is also talking about the famous video with milk carton, which has really mobilized people in recent weeks, at least on social media. The video shows customers fighting for the last milk package in the Spinners supermarket in the Hazmieh area of ​​a suburb of Beirut on March 4. The incident began when a business employee took a carton of milk from a man who had several in his cart. There was no milk left on the shelf so the employee left the box to a woman who wanted some. A battle breaks out between customers and employees – it’s a depressing scene.

“A struggle in the supermarket for a carton of milk … it’s not a scene from a movie but a scene that shows the humiliation and decline we are currently living in,” this social media user wrote.

Many Lebanese were also shocked by another video, which has been circulating online since March 12. It shows a pile of empty packages of subsidized rice, sugar, pasta and lentils on the outskirts of the village of Sarafand, in the Saïda district. Many suspect that store owners changed the packaging of these products to sell them at higher prices.

“A large number of packages of subsidized products were found near the village of Sarafand,” wrote this user of social media.

The day after this video was broadcast, the Sarafand municipal police announced that they had launched an investigation into the cooperatives of two local shopkeepers and accused them of selling subsidized essential goods with counterfeit packaging.

Lebanon is still waiting for a new government, seven months after Hassan Diab’s government resigned after deadly explosions in the port of Beirut. Negotiations to create a new executive branch have stopped as the country plunges deeper into an economic crisis every day.

Lebanon imports almost all of its essential goods. According to an estimate from the World Bank, the government pours about $ 437 million a month into the subsidy system. This covers imports of fuel, flour, medicines and other important goods.

However, in light of the worsening currency crisis, the central bank in February called for an immediate plan to “streamline subsidies”. The current transitional government has not set a date for any of these changes in the face of popular dissatisfaction.