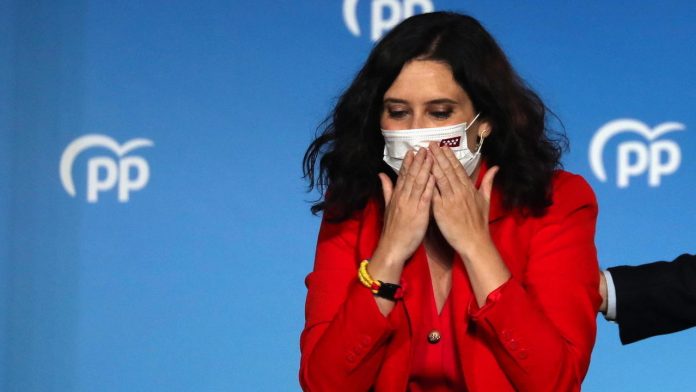 Madrid residents handed over a resounding victory on Tuesday to the region’s hard leader Isabel Diaz Ayuso, who has risen to a prominent position for stubborn opposition to virus restrictions.

With almost all votes counted, the results showed a solid victory for Ayuso, a rising star of the right-wing popular party (PP), who won almost 45 percent of the vote and left a stinging defeat to Prime Minister Pedro Sanchez’s Socialists.

“Today begins a new chapter in the history of Spain”, explained a tearful Ayuso in her victory speech, her words reflected the PP leader Pablo Casado, who explained that the result was “a turning point for national politics”.

With 95 percent of the vote counted, Ayuso doubled his party’s turnout in the 2019 vote, winning 65 of the regional parliament’s 136 seats, while the Socialists lost 13 seats to secure just 24.

The 42-year-old is forced to seek support to steer clear of the far-right Vox, which secured 13 seats – an alternative she has said “would not be the end of the world”.

With the left facing a major defeat, Pablo Iglesias, head of the far-left Podemos, the junior partner of Spain’s ruling coalition, announced that he was leaving politics.

“We have failed, we have been very far from putting together a sufficient majority,” he said, just seven weeks after resigning as deputy prime minister to run as the party’s candidate in a risky venture he eventually lost.

“When you are no longer useful, you need to know when to retreat,” he admitted.

Although the party secured more votes than last time, with only ten seats it will remain a smaller player in the regional parliament while its hard-left rival Mas Madrid secured 24.

The heroine of hospitality

At the helm of Spain’s richest region for just over 18 months, Ayuso has been one of the leading critics of Sanchez’s left – wing government and its handling of the pandemic.

She is an outspoken hardliner and has won widespread support for resisting government pressure to impose stricter restrictions on the local economy.

Madrid is the only major European capital to have kept bars, restaurants and theaters open since the national closure ended in June 2020.

More than 5.1 million people were eligible to vote in Tuesday’s election, which comes after a bitterly fought and divisive campaign in a region that has been ruled by the PP for 26 years.

From the early hours, there were long queues outside the polling stations, with a turnout of 76 percent, about 11 percentage points higher than in 2019.

Although Madrid has been hit by Spain’s largest number of infections and deaths, Ayuso has consistently defied talks to close bars and restaurants, with the hospitality sector regarding her as a heroine.

Her call for a speedy election surprised the political establishment but was a sharp measure aimed at earning the political capital she had clearly amassed.

With “freedom” his campaign slogan, the populist leader focused on people’s need for normality, despite the pandemic.

“Having beer is important,” she said last month. “After a bad day, a beer encourages you.”

Although critics had said that her lax restrictions had ultimately cost lives in a region where nearly 15,000 coronavirus patients had died – one in five of Spain’s total duties of 78,000 – her business-oriented approach paid off.

“Ayuso deserves to be loved for what she has done to keep bars open and save jobs,” said 63-year-old official Jose Luis Cordon after voting for the PP.

Although the left had tried to warn voters about Ayuso’s likely ties to Vox, their words seemed to fall on deaf ears.

Although the left agreed, analysts said it would have no major impact on Spain’s ruling coalition, although it would likely exacerbate opposition between the PP and the government.