Home WORLD NEWS At the Paris trial, the victims are seeking the truth about the...
Facebook
Twitter
WhatsApp
Linkedin
LINE 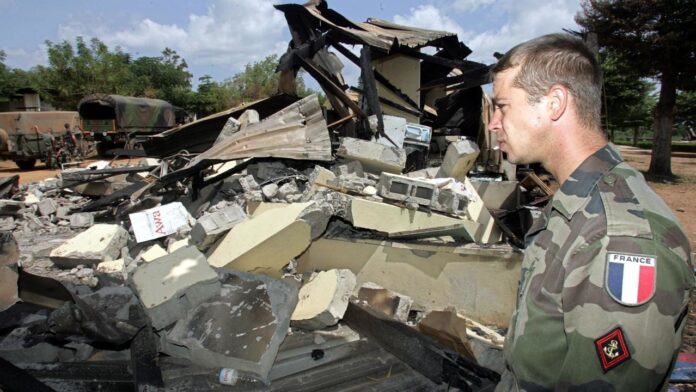 Three pilots are being tried in absentia from Monday following the deadly 2004 bombing of French peacekeepers in Côte d’Ivoire that triggered days of heavy clashes following a long-running legal battle that has raised suspicions of a cover-up.

Nine French soldiers and an American aid worker were killed in the Ivorian city of Bouaké on November 6, 2004, when Ivorian beams aimed at a peacekeeping force deployed in a buffer zone between the government-controlled southern part of the country and the rebel-led north.

The bombing sparked a French retaliatory attack that wiped out Côte d’Ivoire’s small air force, which in turn triggered days of heavy clashes that saw French helicopters pick people up in safety as angry mobs chased foreigners through the streets of Abdijan and other cities.

Laurent Gbagbo, the then Ivorian president, whose ties with the former colonial power had already collapsed at the time, has always denied having ordered the Bouaké airstrikes.

More than 16 years later, two Ivorian officers and a Belarusian mercenary went to court in Paris on Monday, accused of carrying out the Bouaké strikes. They are tried in absentia after controversially escaping capture in the days after the raid.

The case is being brought up by some 40 plaintiffs, including victims of the dead peacekeepers and some of the dozens of soldiers injured in the airstrikes – the deadliest attack on French forces since the 1983 bombing of Beirut.

The complainants hope that the three-week hearings will help to shed light on the many unanswered questions in a case that carries nuances of France’s often murky business in its former African colonies.

They will be particularly keen to hear from three former ministers involved in the decision-making process that resulted in the suspects somehow slipping away directly under the noses of the French authorities.

Did France let the suspects slip away?

Shortly after the Bouaké airstrikes, the three suspects – Ivorian lieutenants Ange Magloire Gnanduillet Attualy and Patrice Ouei and Belarusian citizen Yury Sushkin – were identified in photos taken by the French intelligence service at an airport near the capital, Yamoussoukro, 25 near Samo. plan used in the attack.

Ten days later, Yury Sushkin and seven other Belarusians were arrested by Togolese authorities after leaving Côte d’Ivoire. Togo offered to hand them over to the French authorities, who in a twist that has puzzled investigators suggested that they be released instead.

It was the second time France had potentially allowed at least one of the suspects to slip away.

The day after the Bouaké airstrikes, French troops in Abidjan detained 15 mercenaries from Russia, Belarus and Ukraine, only to release them four days later.

A Russian-made Sukhoi-25 jet after it was hit by a retaliatory French strike in the wake of the Bouaké bombing. © Pascal Guyot, AFP

According to investigators, French diplomats, soldiers and intelligence services had been instructed “not to interfere” in the case. Officials questioned over the years have repeatedly claimed that the priority then was to rescue French citizens living in Côte d’Ivoire at the time.

Failure to arrest the suspects has led to an examination of the role of the three senior prime ministers at the time: Michèle Alliot-Marie, then Minister of Defense Dominique de Villepin, the former Minister of the Interior, and Michel Barnier, who holds the foreign portfolio.

Attempts to prosecute the three former ministers collapsed in 2019 when the Cour de Justice de la République, the only court with jurisdiction to try ministers, chose not to take up the case. Instead, the trio will appear as witnesses in the Paris trial.

Prior to the hearings, Jean Balan, a lawyer for the plaintiffs, expressed his dismay “over the cynicism of those in power who uttered shameless lies, with complete disregard for the truth and the families of the victims.”

Despite the trial’s narrow focus, Balan will seek answers to the key question that continues to haunt their customers, namely who ordered the airstrikes and why.

High-ranking French officials have long supported the hypothesis that an Ivorian military “blunder” was orchestrated by the Gbagbo government. Its goal, they argue, was either to divert attention from a failed campaign against northern rebels or to break the country’s remaining ties with its former colonial power.

Among the complainants, however, the widespread frustration over the many barriers suffered by investigators over the years has only increased suspicions of a possible cover-up.

Along with Gbagbo’s entourage, some relatives of the victims suspect that their loved ones were caught in a complicated operation aimed at discrediting the Ivorian president and justifying a French riposte.

Gbagbo was eventually forced out of power in 2011, with the help of French peacekeepers, following a controversial presidential election won by his longtime rival, Alassane Ouattara.