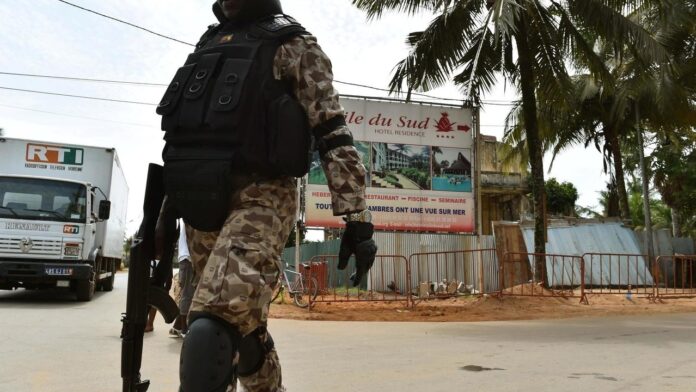 Security forces at the northern border of Côte d’Ivoire with jihadist-torn Burkina Faso were attacked twice overnight, security sources and a local resident said on Monday, giving an unconfirmed charge of three dead.

An army post at Kafolo was attacked at 1:00 a.m., a security official told AFP, in the second raid in the area in less than ten months.

The number of injured and their identities were unclear, the official said, while a local resident said two people were killed.

“The attackers were driven back and a military operation is underway,” the army headquarters told AFP without further details.

Shortly afterwards, a police post was attacked in Tehini, east of Kafolo, killing a gendarme, said a colleague in the city of Ferkessedougou.

Fourteen soldiers were killed in a night attack in Kafolo on June 10 last year.

No group claimed responsibility for the raid, although the attackers are suspected to have been jihadists who came over from Burkina Faso, which has been fighting an Islamist uprising since 2015.

In 2016, 19 people were killed in a jihadist attack in Grand-Bassam, a resort near Ivory Coast’s economic capital Abidjan.

Security experts have long warned that the jihadist campaign in the Sahel, which grew up in northern Mali in 2012 before advancing to Niger and Burkina Faso, could spread to countries on the coast of the Gulf of Guinea.

“These countries themselves are now targets,” he said. “The terrorists are already financing men who are spreading in Côte d’Ivoire and Benin.”

President Alassane Ouattara, speaking to AFP when he had re-election in October, said Côte d’Ivoire had intensified “military protection at the border” with improved intelligence and “technical tools”.

“We have cleared out the (Kafolo) zone, we are ready to face all possible threats,” he said.

France has 900 troops at a military base in Côte d’Ivoire in addition to the deployment of 5,100 personnel during Operation Barkhane, an anti-jihadist mission launched in the Sahel in 2014.