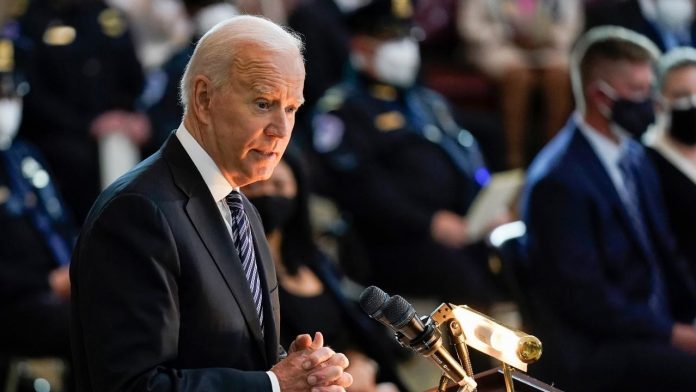 US President Joe Biden announced on Wednesday that it is “time to end” the United States’ longest war with the unconditional withdrawal of troops from Afghanistan, where they have spent two decades locked in a bloody stalemate with the Taliban.

Called “eternal war”, the US military offensive in Afghanistan began in response to the terrorist attacks on the United States on September 11, 2001.

Now, 20 years later – after nearly 2,400 US military and tens of thousands of Afghan deaths – Biden designates September 11 as the deadline by which the last American soldiers have finally resigned.

The war is at best a stalemate.

The internationally backed government in Kabul has only tough control over the country’s stretches, while the Taliban is growing in strength, and many predict that the uprising will try to regain total power once the government’s US military umbrella is removed.

In a speech on Wednesday, Biden would tell the Americans that it is time to accept the reality that there is no alternative to a clean break.

“We cannot continue the cycle of expanding or expanding our military presence in Afghanistan in the hope of creating the perfect conditions for our withdrawal and expecting a different outcome,” he said, according to excerpts released before his speech.

“I am now the fourth American president to preside over a US troop presence in Afghanistan. Two Republicans. Two Democrats,” he said. “I will not transfer this responsibility to one-fifth.”

Analysis: Consequences of US withdrawal from Afghanistan

Biden’s decision is not a shock. The war is extremely unpopular with voters, and Biden’s predecessor Donald Trump had committed an even earlier outcome on May 1.

But there was immediate criticism from some quarters that the United States was abandoning the Afghan government and encouraging jihadist insurgency.

“War does not end when one side abandons the struggle,” said influential Republican Rep. Liz Cheney.

“Withdrawing our forces from Afghanistan on September 11 will only stimulate the very jihadists who attacked our homeland that day 20 years ago,” she added.

Biden would say in his speech that Washington will continue to support the Afghan government, just not “militarily”.

This will mark a profound change of influence for the besieged government and its US and coalition-trained security forces.

Biden had previously considered stationing a remaining US force to strike at al-Qaeda or other international jihadist groups in Afghanistan or make a withdrawal based on progress on the ground or in slow peace talks.

In the end, he decided to leave staff only to guard installations such as the US Embassy in Kabul, a senior official said.

“The president has judged that a conditional approach, which has been the approach for the past two decades, is a recipe for staying in Afghanistan forever,” the official told reporters on condition of anonymity.

Analysis: The Afghan government will fight to contain only the Taliban

Earlier on Wednesday, US Secretary of State Antony Blinken said Washington would draw up a “coordinated” withdrawal plan with its NATO allies.

“Together, we have achieved the goals we set ourselves to achieve and now it’s time to bring our forces home,” Blinken said ahead of talks with NATO partners in Brussels.

German Defense Minister Annegret Kramp-Karrenbauer said NATO was likely to join the United States in withdrawing its troops in September.

The Times said Britain would withdraw its 750 troops and quoted sources as saying “they would fight without US support due to a dependence on US bases and infrastructure”.

The planned withdrawal comes when the Taliban observe a ceasefire with US troops and their allies but not with forces loyal to the Afghan government.

A threat assessment report released Tuesday by the director of the U.S. National Intelligence Service said the Taliban “are convinced they can achieve military victory.”

The looming upheaval raises major questions about the future of attempts to modernize Afghanistan, especially for Afghan women who have benefited from increased rights, such as access to education.

The Taliban, which applies a strict brand of Sunni Islam, banned women from schools, offices, music and most of daily life during their 1996-2001 rule over much of Afghanistan. Two decades later, 40 percent of school children are girls.

Turkey has said it will host a US-backed peace conference from April 24 to May 4 that would bring together the Afghan government, the Taliban and international partners.

But Mohammad Naeem, a spokesman for the Taliban’s office in Qatar, said the rebels would not attend a conference on Afghanistan’s future “until all foreign forces withdraw completely”.

A decade ago, the United States had about 100,000 troops in Afghanistan.

The troop at the end of Trump’s presidency had dropped to 2,500. As of February this year, NATO had about 10,000 troops in the country.