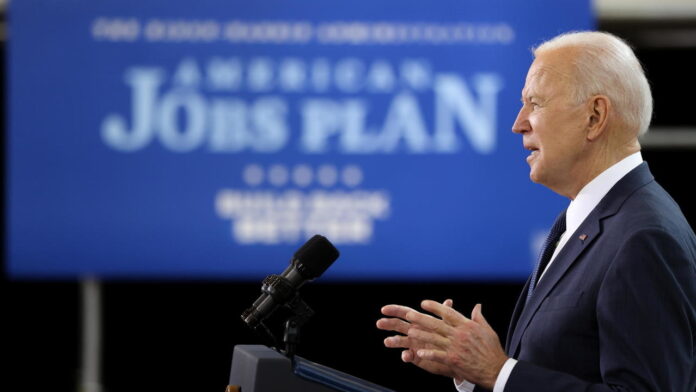 On Wednesday, President Joe Biden outlined a $ 2.3 trillion plan to overhaul the country’s infrastructure over the next eight years in what he described as a “once-a-generation investment in America” ​​that would undo his predecessor’s signing of the Giant tax cuts for companies in the process.

At a carpenters’ association training center in Pittsburgh, Biden made comparisons between his hard-hitting transformation of the US economy and the space race – and promised results as big as the New Deal or Great Society programs that shaped the 20th century.

“It’s not a plan that tips around the edges,” Biden said. “It’s a once-in-a-generation investment in America, unlike anything we’ve seen or done since we built the interstate highway system and spaceflight decades ago. In fact, it is the largest American job investment since World War II. It will create millions of jobs, well-paid jobs. ”

White House officials say spending would generate these jobs as the country shifts away from fossil fuels and combats the risks of climate change. It is also an attempt to compete with the technology and public investment that China is making, which has the world’s second largest economy and is rapidly gaining the United States’ dominant position.

“I am convinced that if we act now, in 50 years’ time, people will look back and say that this is the moment when America won the future,” Biden said.

The financing of the infrastructure projects comes from an increase in corporate taxes which aims to raise the necessary piles of money over 15 years and then reduce the deficit in the future. In doing so, Biden would undo the Trump and Republican congressional measures to raise the corporate tax rate to 28% from the 21% rate set in a 2017 review.

“Nineteen Fortune 500 companies, including Amazon, do not pay a single penny in income tax,” Biden said.

Wednesday’s announcement will be followed in the coming weeks by Biden running a companion of about the same size for investments in childcare, family deductions and other domestic programs. That package of nearly two trillion dollars would be paid for by tax increases on wealthy individuals and families.

Biden’s choice of Pittsburgh to reveal the plan carried important economic and political resonance. Not only did he win Pittsburgh and its surrounding counties to help secure the presidency, but he launched his campaign there in 2019. The city famous for the steel mills that drove America’s industrial boom has steadily turned to technology and healthcare and graduated college in one sign on how economies can change.

The Democratic president’s infrastructure project would be funded by higher corporate taxes – a trade-off that could lead to strong opposition from business and hinder attempts to work with Republican lawmakers. Biden hopes to be able to manage an infrastructure plan for the summer, which may mean that they only rely on the narrow democratic majorities in the House and the Senate.

The White House says most of the proposal includes $ 621 billion for roads, bridges, public transportation, charging stations for electric vehicles and other transportation infrastructure. Expenditure would drive the country away from internal combustion engines, which the car industry sees as an increasingly obsolete technology.

An additional $ 111 billion would go to replace lead water pipes and upgrade sewers. Broadband Internet would cover the country for 100 billion dollars. Separately, $ 100 billion would upgrade the grid to supply clean electricity. Homes were to be retrofitted, schools modernized, workers trained, and hospitals renovated according to plan, which also seeks to strengthen American manufacturing.

The new design could keep the economy afloat and get on the heels of Biden’s $ 1.9 trillion coronavirus virus package. Economists already estimate that it may drive growth above 6% this year.

To keep companies from moving profits abroad to avoid taxation, a global minimum tax of 21% would be introduced. The tax code would also be updated so that companies could not merge with a foreign company and avoid taxes by moving their head office to a tax haven. And among other provisions, it would increase IRS audits of companies.

Biden appealed to Republicans and the business community to join him in negotiating the bill, but the legislative prospects for Biden’s twin proposal already seem to depend on Democrats voting on their own through the budget reconciliation process, which requires only a simple majority in the 50-50 Senate.

“I will take Republicans to the Oval Office, listen to them, what they have to say and be open to other ideas,” Biden said. “We will negotiate in good faith. All Republicans who want to help do this. But we must get it done. ”

“I look forward to working with President Biden to accomplish a great, bold plan that will propel America forward for decades to come,” Schumer said at an event in Buffalo.

But key GOPs and business leaders were already panning the package.

“It seems that President Biden has an insatiable appetite for spending more money and raising people’s taxes,” Louis GOP whip Louis Scalise said in an interview.

The business community favors updating US infrastructure but disapproves of higher tax rates. The United States Chamber of Commerce, Executive Vice President and Chief Policy Officer Neil Bradley, said in a statement that “we applaud the Biden administration for making infrastructure a top priority. However, we believe that the proposal is dangerously misguided in terms of how to pay for infrastructure. “Business Roundtable, a group of CEOs, would rather have infrastructure financed with user fees such as tolls.

In a statement, Trump blasted his successor’s proposal, claiming that it “would be among the biggest self-inflicted economic wounds in history.”

Infrastructure spending usually has the promise of pushing economic growth, but how much remains the subject of political debate. Commuting and delivery times could be shortened, while public health would be improved and construction jobs would strengthen consumer spending.

Standard & Poor’s chief economist in the United States, Beth Ann Bovino, estimated last year that a $ 2.1 trillion increase in infrastructure spending could add as much as $ 5.7 trillion in revenue to the entire economy over a decade. That kind of analysis has led to Liberal Democrats in Congress, such as the Washington Rep. Pramila Jayapal concluded on Tuesday: “The economic consensus is that infrastructure pays for itself over time.”

But the Biden administration is taking a more cautious approach than some Democrats might like. After $ 1.9 trillion in pandemic assistance and $ 4 trillion in relief last year, the administration is trying to avoid raising government debt to levels that would trigger higher interest rates and make it harder to pay back.

Biden’s efforts could also be complicated by demands from a handful of Democratic lawmakers who say they cannot support the bill if it does not address the $ 10,000 ceiling for individuals’ state and local tax deductions introduced under Trump and a Republican-led congress.

With a narrow majority in the House, they could conceivably repeal all bills that do not significantly lift the lid or repeal it completely.

“I can only vote for a bill that has a significant tax effect for my voters if it addresses the SALT ceiling,” tweeted Rep. Tom Malinowski, DN.J.

“We say No SALT, no deal,” Democratic Representatives Tom Suozzi of New York and Bill Pascrell and Josh Gottheimer of New Jersey said in a joint statement.