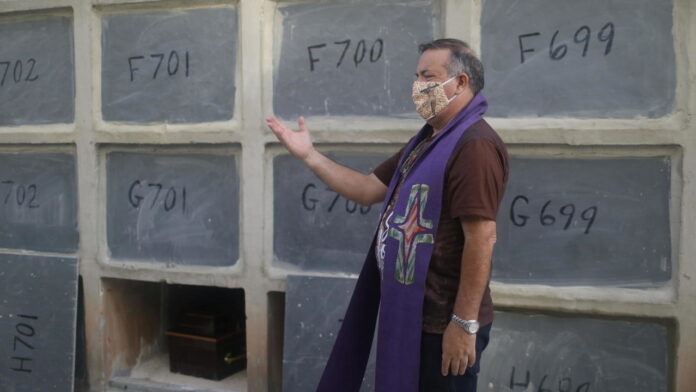 The hard-hit Brazil closed by far the deadliest month of the coronavirus pandemic on Wednesday, with 66,573 people killed by Covid-19 in March, more than twice as many as previous records.

An explosion of serious cases has overwhelmed many of the country’s hospitals and forced doctors to make difficult decisions about who will provide life-saving care and raise fears that the new chapter in the crisis may spread beyond Brazil.

The Ministry of Health registered more than twice as many deaths in March as Brazil’s second deadliest month of the pandemic, July 2020, when there were 32,881 deaths.

“Never in Brazilian history have we seen a single incident kill so many people in one month,” said Dr. Miguel Nicolelis, former coordinator of the Pandemic Response Team for Brazil’s poor northeast.

As the southern hemisphere approaches and the virus spreads rapidly, Brazil is facing “a perfect storm,” he told AFP.

“It is a threat not only to Brazil but to the whole world.”

Brazil’s average daily death toll has more than quadrupled since the beginning of the year, to 2,976 a week, the highest by far in the world.

The 24-hour death toll reported by the Ministry of Health on Wednesday also set a new record: 3,869.

Health experts say that the recent number of cases in the spreading South American country of 212 million people is partly driven by a local variant of the virus called P1.

Considered to be more contagious, P1 can infect people who have had the original strain of the virus and have spread to more than two dozen countries, including the United States, the United Kingdom and Japan.

As long as the pandemic continues to rage unchecked in Brazil, there is a risk that more variants may occur in the country, say researchers.

President Jair Bolsonaro is facing increasing criticism for his handling of the pandemic.

The right-wing leader’s opposition to lockdowns, face masks and vaccines has caused a storm of controversy as Covid-19 has claimed more than 321,000 lives in Brazil, second only to the United States.

Under pressure from congressional and business allies, Bolsonaro installed his fourth health minister for the pandemic last week, replacing Eduardo Pazuello – an army general with no medical experience – with cardiologist Marcelo Queiroga.

The president tried to show that he took the pandemic seriously and started a crisis committee.

However, he returned to his anti-lock message at the committee’s first meeting on Wednesday.

“We will not solve the problem by staying at home,” he said – in contrast to his new health minister, who had just called on Brazilians to “respect social distancing.”

Bolsonaro claims that the economic damage of locking is worse than the virus itself, an attitude that has left the state and local authorities to implement a messy patchwork of pandemic policy.

‘Worst yet to come’

Brazil, meanwhile, is struggling to secure enough vaccine doses and is far from achieving the Ministry of Health’s goal of vaccinating the entire adult population by the end of the year.

About eight percent of the population has received a first dose and 2.3 percent per second.

Health regulators granted emergency approval on Wednesday for Johnson & Johnson’s single-dose vaccine, but the 38 million doses that Brazil has purchased will not begin arriving until August.

“We are at the worst moment of the pandemic, and the indications are that April will be very bad as well,” said epidemiologist Ethel Maciel of Espirito Santo Federal University.

“The worst has not yet come,” she told AFP.

Covid-19 beds in intensive care units are more than 90 percent full in 18 of Brazil’s 27 states, and another seven states are approaching that level.

At least 230 patients with suspected or confirmed cases of Covid-19 died while waiting for a bed at the intensive care unit in Sao Paulo this month, according to TV Globo.

Several states have begun implementing protocols to determine which patients receive ICU care and prioritize those who are likely to survive.

“We are in a very tragic situation,” Maciel said.