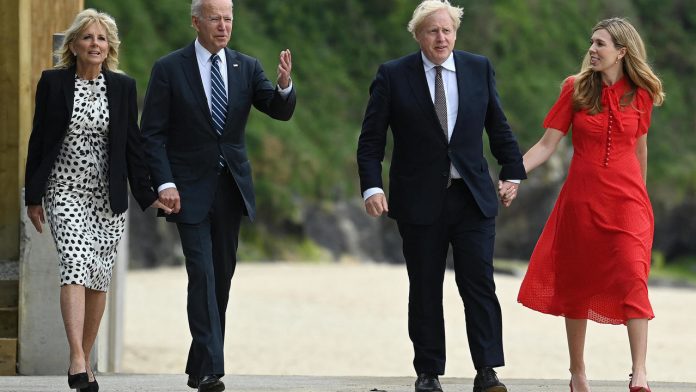 British Prime Minister Boris Johnson on Thursday greeted US President Joe Biden as “a great breath of fresh air” as he sought to work with London on a huge range of issues, ranging from climate change to COVID-19 to security.

“It’s a great relief,” Johnson said of the talks with Biden. “It’s new, it’s interesting and we work really hard together. We went on for about an hour and twenty or so. It was a long, long, good session. We covered a huge range of topics.”

President Joe Biden and British Prime Minister Boris Johnson all laughed during their first meeting, highlighting their country’s famous “special relationship” against a backdrop of both political and personal differences.

“I told the Prime Minister that we have something in common. We both got married way above our station,” Biden joked after a highly choreographed walk with their husbands.

Johnson laughed and said he “wouldn’t disagree with that one,” but then seemed to hint that he would only try to improve relations with his American counterpart.

“I’m not going to disagree with you on that,” Johnson said, “or anything else really.”

Both couples – Johnson is newly married – held hands as they walked. First Lady Jill Biden’s black coat had “LOVE” embroidered on the upper back — a fashion move that recalled her predecessor Melania Trump’s decision to wear a coat that read “I Really Don’t Care, Do U?” written on the back during a 2018 trip to a Texas border town.

Despite the exchange of praise and pleasantries, friction points remain. The president has strongly opposed Brexit, Britain’s departure from the European Union, which Johnson has supported, and has expressed deep concern for the future of Northern Ireland. Biden once called Johnson a “physical and emotional clone” of former US President Donald Trump.

Johnson downplayed disagreements with Washington over Brexit’s impact on peace in Northern Ireland, saying the United States, the United Kingdom and the European Union were in “complete harmony” in finding solutions to uphold the 1998 peace agreement.

“There is full agreement on the need to move forward, find solutions and ensure we uphold the Belfast Good Friday Agreement,” Johnson said. “And I think what’s interesting is that Northern Ireland is a fantastic place and has great potential. It’s a great, great part of the UK.”

Asked if Biden had made his alarm about the situation in Northern Ireland very clear, Johnson said: “No, he didn’t.

“America, the United States, Washington, the UK and the European Union have one thing we absolutely all want to do,” Johnson said. “And that’s to uphold the Belfast Good Friday Agreement and make sure we keep the balance going in the peace process. That’s definitely common ground,” Johnson said. “You know, I’m optimistic.”

Both sides have publicly emphasized that the meeting would be about strengthening ties between longtime allies in a week when Biden will try to rally the West to reject Russian interference and publicly demonstrate that it can compete economically with China.