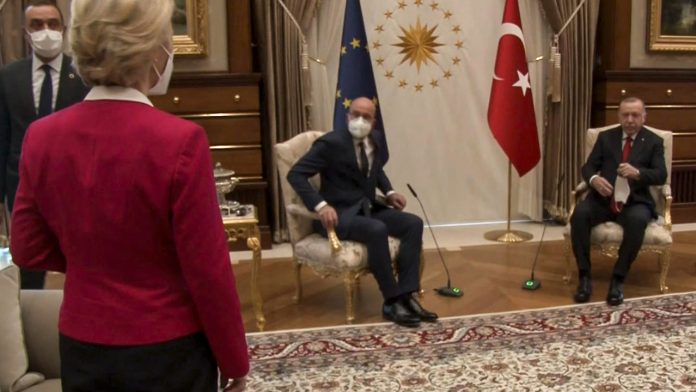 The European Commission struck on Wednesday after its chief Ursula von der Leyen was left without a chair when the Turkish president sat down for talks with his male counterpart.

Eventually, she was put on a couch a little further away from her counterparts, opposite the Turkish Foreign Minister – someone below her in the nesting order of the diplomatic protocol.

“The President of the Commission was obviously surprised,” said European Commission spokesman Eric Mamer, insisting that von der Leyen should have been treated “exactly the same way” as Michel.

“She believes these issues are important and need to be addressed appropriately, which they clearly were not,” Mamer said.

Faux pas – quickly called “sofagate” online – came at a sensitive moment when the EU and Turkey want to build the band despite concerns over Ankara’s record of rights, including discrimination against women.

Erdogan outraged Brussels in front of the bloc’s leaders by announcing that he was withdrawing from the Istanbul Convention on the Prevention of Violence against Women and Children.

After the meeting with the Turkish leader, von der Leyen emphasized that “human rights issues are non-negotiable”.

“I am deeply concerned about the fact that Turkey withdrew from the Istanbul Convention,” she said.

“It’s about protecting women and protecting children from violence, and this is clearly the wrong signal right now.”

Mr Mamer said the problem with Mr von der Leyen’s seats during the meeting with Erdogan had “sharpened her focus on the issue”.

The experienced little to the first woman ever to occupy one of the EU’s two main roles picked up picks in Brussels.

“First they withdraw from the Istanbul Convention and now they leave the President of the Commission without a place on an official visit. Shameful. #WomensRights”, wrote the Spanish MP Iratxe Garcia Perez.

German MEP Sergey Lagodinsky wrote about von der Leyen’s statement that “” Ehm “is the new term for” this is not how EU-Turkey relations should be “.

But not all ire was aimed at the Turkish side.

Dutch MP Sophie in ‘t Veld was left questioning why Michel was “silent” as his female colleague was left without a seat.

There was no immediate comment from Michel’s spokesman or the Turkish Presidency on the incident.

Relations between Brussels and Ankara were strained last year as tensions erupted over Turkish gas exploration in the eastern Mediterranean.

The EU is looking at enhanced cooperation following a diplomatic offensive by Erdogan in recent months aimed at improving ties between neighbors.

The bloc has been encouraged by Turkey, which is resuming talks with Greece on a disputed maritime border and is going to resume peace efforts over fragmented EU member Cyprus.

Brussels has sanctioned the sanctions against Ankara and offers economic and diplomatic incentives – but insists that Erdogan must maintain the current calm and engage constructively on important issues.