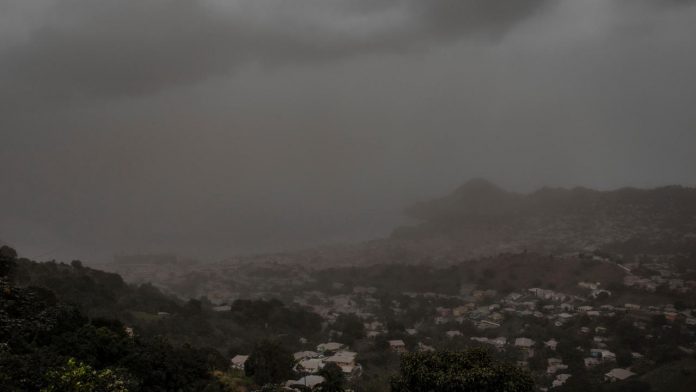 Ash covered much of the Caribbean island of Saint Vincent on Saturday, and the stench of sulfur filled the air after a series of eruptions from a volcano that had been silent for decades.

The thick pond was also on the move, traveling 175 kilometers to the east and beginning to affect the nearby island of Barbados.

“Barbadians have been urged to stay indoors as thick plumes of volcanic ash move through the atmosphere,” says the Caribbean for disaster management.

The whitish powder caked roads, homes and buildings in Saint Vincent after the powerful eruptions from the volcano La Soufriere that began on Friday and continued into the night.

“Saturday morning on the island with over 110,000 inhabitants looked like a winter wonderland, albeit covered in ash,” said the news portal news784.com.

Visibility in some areas was extremely limited, while in the capital Kingstown in the southern part of the island – the volcano is in the north – the ash caused a thin dust mist, the portal said.

“Vincentians wakes up with extremely heavy ash fall and strong sulfur odor that has now advanced to the capital,” tweeted the local emergency room.

The eruption caused thousands of people to flee for safety. About 16,000 people live in areas under evacuation orders.

Prime Minister Ralph Gonsalves said on Saturday that water has been shut off in most areas and the country’s airspace is closed due to ash. About 3,000 people spent the night in shelter.

“It’s a huge operation ahead of us,” Gonsalves told NBC News.

He said his government had been in contact with other countries seeking help. Guyana and Venezuela ship ships with supplies, Gonsalves said.

The first blast from La Soufriere, the highest peak in Saint Vincent and the Grenadines, sent plumes of hot ash and smoke 6,000 meters into the air Friday morning.

The center’s director, Erouscilla Joseph, said late on Saturday that there had been “further explosions” throughout the day, accompanied by more ash.

“Unfortunately, we believe that more seismic disturbance will be expected overnight,” she added in a voice recording on Twitter.

It had been rumbling for months before it finally blew.

“We’re trying to be ok. It’s dead quiet outside and the atmosphere is thoughtful,” said Vynette Frederick, 44, a lawyer in Kingstown.

Northwest of Kingstown on the 30-kilometer (180-mile-long) island, Zen Punnett said things had calmed down after the first panic when evacuation orders came out Thursday night.

“It has become more dangerous. We stay inside,” she said.

The emergency management agency posted pictures of a coast guard ship that evacuated residents in an area that previously refused to leave. Standing on a bridge, the air above the evacuated lime gray.

Most people in the red zone had been moved to safety by Friday, authorities said.

Cruise ships were on their way to help with the evacuation work.

Police in Saint Vincent and the Grenadines on Saturday issued a call to troublemakers to stop making calls to rescue workers.

“We are in the midst of a serious evacuation and security exercise to protect and rescue people affected by the outbreak,” the agency said.

“These irresponsible calls divert much-needed resources and personnel from the evacuation exercise.”