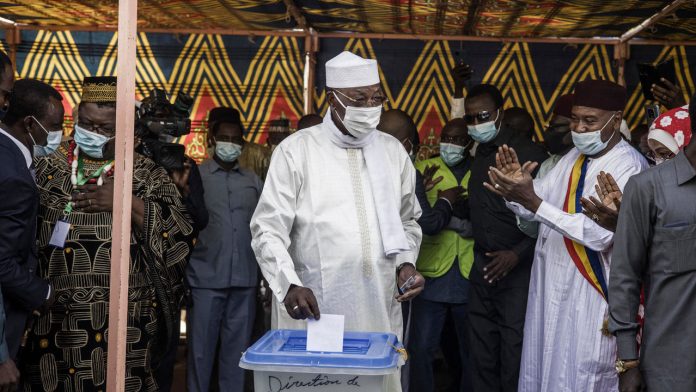 Chad went into the presidential election on Sunday with Idriss Deby Itno, ruler of the past three decades, winning a sixth term.

An important ally in the Western world’s anti-jihadist campaign in the Sahel, Deby, 68, is the leader of a six-candidate race without major rivals following a campaign in which demonstrations were banned or spread.

Queuing to vote in the capital N’Djamena, a 25-year-old saleswoman named Bernadette told AFP she voted for Deby because “thanks to him, I am free to go wherever I want, day or night, in total safety”.

Ballot boxes and ballot boxes gradually arrived in the city, with many polling stations that AFP visited did not open in time.

Police and soldiers were out in force over N’Djamena, with elite troops from the Republican Guard deployed to the central polling station where Deby himself would vote, an AFP journalist said.

Chad has struggled with poverty and instability since gaining independence from France in 1960.

A former rebel and career soldier who took power in a coup in 1990, Deby has twice, with French help, thwarted attempts to reject him.

Other candidates include Albert Pahimi Padacke, a former prime minister under Deby, and Felix Nialbe Romadoumngar – officially “opposition leader” because his URD party has eight seats in the National Assembly.

Lydie Beassemda, a former agriculture minister, is the first woman to run for president in Chad’s history.

She places her campaign on federalism, in a country where ethnic rivalry is common and on women’s rights, in a culture where patriarchal domination is rooted.

But seven other candidates were rejected by the Supreme Court and three withdrew, including longtime opposition politician Saleh Kebzabo, who quit protesting against violence by security forces.

Deby has campaigned for a promise of peace and security in a region rocked by jihadist insurgency.

Provisional results from the election are scheduled for April 25, with final results on May 15.

With Deby winning, the big question mark over turnout is.

Deby urged voters at his last rally on Friday to “show up massively,” but many residents have expressed disinterest in an election whose results already seem certain.

About 7.3 million people have the right to vote out of a population of 15 million, but the most critical opposition parties have called on voters to boycott the election.

Weekly protest marches calling for a peaceful transfer of power have been banned or vigorously spread.

On February 28, police and soldiers conducted a commando raid on the home of a prominent candidate, Yaya Dillo Djerou’s home. His mother was among at least three killed and he is now on the run.

Human Rights Watch, Amnesty International and UN Secretary-General Antonio Guterres are among those who have voiced criticism.

The United States is watching

On Thursday, the United States called on Chad’s election officials and courts “to ensure that these elections are conducted freely, fairly and openly”.

“We will look at the next few days,” U.S. State Department spokesman Ned Price warned.

Deby has also, as before, benefited from divisions and weaknesses within the opposition.

Francois Djekombe, president of the opposition’s Holy Union for the Republic, said efforts to mobilize the public had been weakened by internal strife, poor leadership and inadequate communication.

“Let us humbly admit that we have failed,” he said ahead of election day. “It is clear that people do not want the popular uprising that we were trying to impose.”

Kelma Manatouma, a Chad expert at the University of Paris-Nanterre, said that “with the large funds Deby has mobilized, it is certain that he will win.”

Chad has been an oil producer since 2003, but it is still deeply poor.

In 2018, 42 percent of the population lived below the poverty line, according to the World Bank. In 2020, Chad ranked 187th out of 189 countries on the UN Human Development Index.