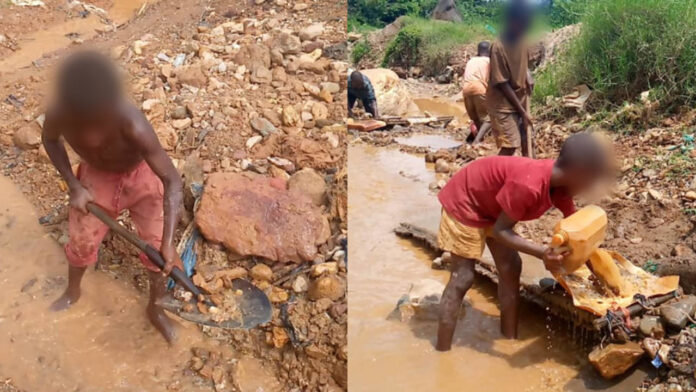 Videos and photos sent to the JowharObservers team on March 3 show children working in gold mines in Kamituga in the southern Kivu province of the eastern Democratic Republic of Congo. Even though it is illegal, child labor is still a reality, according to human rights organizations.

With buckets and shovels in their hands, children – some of whom are not yet 10 years old – wash the muddy contents that are pulled up from mines in an attempt to extract gold. They have no proper equipment or forms of protection.

In mid-February, Idi Kyalondwana, who works for a mining cooperative specializing in rock crushing, traveled to the mines in Kamituga, in southern Kivu province, where many locals make a living from small-scale or artisanal mining. He returned with photos and photos documenting the many children who worked with these operations.

Some children here work in the mines every day and work several hours at a time. Some actually go down several hundred meters deep axes and tunnels to dig for gold without any safety measures. It’s incredibly dangerous. There are often caves.

Others are exposed to toxic substances such as mercury, which is used to clean the ore. They must also carry heavy loads. Most of these children are of school age, but they do not go to school even though the president, Felix Tshisekedi, declared that primary school should be free for all children.

There is high unemployment in southern Kivu [Editor’s note: There are no reliable official statistics. However, one local radio reported that the unemployment rate is at 80%, NDLR]. Parents do not have the opportunity to take care of their children, so the children have to work in the mines where they make money by selling grams of gold to retailers.

This happens even if child labor is prohibited by law. But the local authorities and the mining police do nothing to stop the practice

South Kivu is full of gold deposits, most of which are controlled by the Kivu Mining Society (SOMINKI) and the Canadian company Banro Corporation through four branches, including Kamituga Mining, which has the largest mining concession in the city. However, Banro Corporation’s operations in the province have been suspended since September 2019 due to the presence of rebel militias.

“Poverty remains the main cause”

According to Raoul Kitungano, head of the NGO “Justice pour tous” (Justice for All), which fights against child labor in South Kivu’s mines, the locals continue to carry out small-scale, artisanal mining on part of my website, this multinational admitted.

The locals cared long before Banro Corporation arrived. To keep the peace, the Canadian multinational country continued to allow local miners access to the deposit.

Most of the locals abandoned agriculture for mining, as they are attracted by rapid yields. School breaks in this area are very high [Editor’s note: Though there are no official statistics confirming this]. Although the government has declared that all children should have access to free basic education, the program does not cover the whole country.

The children take enormous risks because fifty people died in a cave in the same mine in September 2020. But we have no credible statistics on the number of children currently working in the mines in southern Kivu.

When it comes to NGOs working to end child labor, we have limited resources. We try to talk to the parents and the children to try to convince them that working in the mines is not the right answer. But more needs to be done. Jobs must be created and alternatives must be created to get children out of mining.

Banro Corporation has not answered our questions. We will update this article if we receive a response.

In an interview published in March by the Congolese special publication Mining & Business, Venant Burume, Minister of South Kivu, admitted that “in territories like Shabunda, Mwenga, more than 80% of the population work in craft mining. With the unemployment crisis also in Kalehe, most of our young people are also turning to craft mining. “

About 40,000 children work in inhumane conditions for cobalt crafts alone in the Democratic Republic of Congo, according to a 2016 report from Amnesty International and the Congolese NGO Afrewatch.

Under pressure, the government released a strategic document in October 2017 setting out its goal of “eradicating child labor in mining by 2025”.

Based on child protection laws condemning the worst forms of child labor, Article 299 (b) of the Mining Act, which was revised in 2018, prohibits “mining and sale of mining products from places where laws protecting human rights and women’s rights and children” are violated. $ 000 per day until the infringement ceases. According to Kitungano, “however, these texts are not respected. And no real progress has been made. ”

However, Kitungano has seen progress in the cobalt mining sector.

“Thanks to the activity of NGOs on the international stage, there are now fewer children working in cobalt mining,” says Kitungano. “Cobalt is a strategic material and very important for smartphones and lithium-ion batteries. DRC is the largest producer globally. But child labor is still a nuisance in other mining industries. ”

In 2019, International Rights Advocates, a human rights organization, filed a complaint against technology giants Apple, Microsoft, Google, Dell and Tesla, accusing them of taking full advantage of the work of children in the DRC’s cobalt mines.