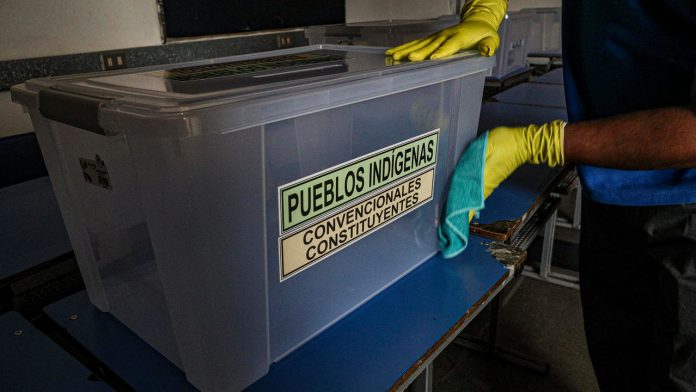 The face of a new Chile begins to take shape this weekend as the South American country elects 155 people charged with drafting a new constitution to replace the one imposed during Augusto Pinochet’s military dictatorship.

Nearly 80% of voters in a plebiscite last year chose to draft a new charter for the nation after a year of protests, although there is much less consistent agreement on what it should include.

Activist groups have mobilized in the hope of enshrining equality for women, the right to abortion and protecting the environment and indigenous people.

Conservatives have also campaigned hard, hoping to maintain a dominant private sector and rules, making it difficult to push through major reforms in the legislature.

However, the meeting’s ability to enforce strong clauses may be limited. A two-thirds chord is required, so any block that can collect one-third of the votes in the constitutional convention can block any clause.

The ruling center-right coalition and other conservative parties have one slate in the two-day vote, while the left and center-left are split.

The document emerging from the bickering will go public in mid-2022. If rejected, the current constitution will remain in effect.

The future make-up of the body reflects a wave of resentment against the current political system that became apparent during unrest that spread across the country in late 2019, with a lot of protests against higher taxi fares, inadequate pensions and health care, poor schools and general inequality in a of the richest nations in Latin America.

“Those protests were like an avalanche, the expression of a rage that has built up over the years in the neoliberal system,” said Cumplido, a historian at the National Library of Chile who describes herself as a feminist and says she is a wants greater citizen representation in politics.

“We need to deepen democracy, make it more flexible, bring it more into line with what is happening today, and that has strongly driven my belief that we need a new constitution,” Cumplido told Reuters.

Congressmen are banned from the convention, and by law half of the body must be made up of women – the first time a constitution has been drafted under terms of gender equality, the United Nations said.

“I don’t believe in the current politicians … It is the hour for us, for everyone who has fought for a very just country, to be part of the change,” said candidate Natalia Aravena, a 26-year-old nurse who lost an eye during the recent wave of protests.

Seventeen seats are reserved for indigenous peoples, which are not mentioned in the existing constitution.

The left, in particular, has long disliked Chile’s current constitution, which was drafted and imposed under the Pinochet military dictatorship of 1973-1990.

That document, which created a strong presidency and guarantees the protection of private property, has led the nation through a period of general prosperity but also intense inequality.

It also gives broad powers to security forces, as evidenced by a brutal repression of recent protests.

The old constitution was amended over the years, most notably with the repeal in 2005 of an article that allowed the nomination of senators and senators for life in Congress.

The vote was originally scheduled for April, but was delayed by an increase in Covid-19 cases. Overall, Chile is one of the countries most successful in vaccinating its population, with nearly 60% of Chileans receiving at least one dose, although most of the country’s districts are still under some sort of pandemic restriction.