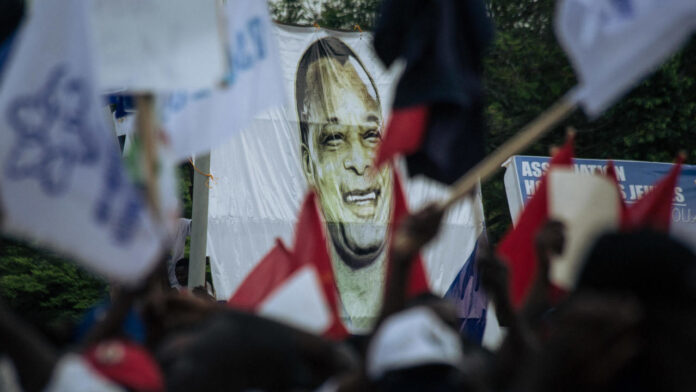 The Republic of Congo will vote in the presidential election on Sunday with incumbent Denis Sassou Nguesso aiming to expand his decades-long grip on power in the Central African state.

Sassou Nguesso has accumulated 36 years in office – he was re-elected no later than 2016, after which the opposition was virtually shut down and his two main rivals were sentenced to 20 years of forced labor.

The 77-year-old retired paratrooper seems favored to win a fourth term in Sunday’s vote. The largest opposition group, the Pan-African Union for Social Democracy, is boycotting the vote.

Sassou Nguesso is hoping for a victory in the first round over six challengers, including former minister Guy-Brice Parfait Kolelas, who was second in 2016, and former finance minister Mathias Dzon.

“A shot, KO”, proclaimed his campaign posters that predicted a win for the candidate.

Sassou Nguesso has put youth and the development of agriculture at the center of his campaign and pointed out that the country imports most of what is consumed despite its agricultural resources.

Several thousand supporters, some waving banners with his initials “DSN”, gathered for his last campaign stop in Brazzaville on Friday, where he promised more programs for the country’s youth.

“Our policy in favor of young people will continue with vigor and vigor during the next term,” he told supporters.

But his tone towards the young seems to have met with a mixed response in a country where the majority of the population of five million are people under the age of 25 who have never known another president.

“Even if there is some trouble here, there is no war like in other countries. Better to stay with Sassou who gives us peace, at least it’s good,” says Mariela, a 19-year-old high school student on the coast. the city of Pointe-Noire.

“It is not possible to vote,” said Francesc, a 25-year-old lawyer in the capital Brazzaville. “The dice are loaded in advance.”

The bishops’ conference of the Congolese Catholic Church has already expressed “serious reservations” about the openness of the vote and fears a possible shutdown of the internet on Sunday, as in the 2016 election.

But the former French colony, also known as Congo-Brazzaville, has been hit hard by cycles of falling crude oil prices and is also hampered by debt, corruption and poor infrastructure.

Last year, the economy shrank by 6.8 percent, according to the African Development Bank (AfDB). In the UN Human Development Index 2020, a benchmark for poverty, the country ranked 175 out of 189 countries.

Transparency International ranked Congo 165th out of 179 countries in its 2020 corruption index.

Members of the Sassou Nguesso family were placed under investigation in Paris in 2017 in a case involving alleged “ill-gotten gains”.

In July last year, the NGO Global Witness said that US federal prosecutors were investigating their son, Denis Christel Sassou Nguesso, over alleged embezzlement of several million dollars from the publicly owned National Society of Petroleum of Congo (SNPC).

A former elite paratrooper, Sassou Nguesso, first ruled from 1979 under a one-party system and resigned in 1992 when he placed third in multi-party elections.

He then returned to power in 1997 at the end of one of Congo’s civil wars. He won votes in 2002 and 2009, although both victories were questioned by the opposition.

A controversial referendum in 2015 removed a 70-year age limit and a ban on presidents serving for more than two terms, allowing Sassou Nguesso to run again the following year.

That election sparked protests in Brazzaville and an armed conflict of anti-government uprisings in the South Pole region.

France, the country’s biggest supporter, has been urged to push hard for fair elections and condemn the abuse of rights.

A group of French and Congolese activists, in a commentary published by Le Monde in Paris, said that “the Republic of Congo, like French diplomacy, should return to democracy.”