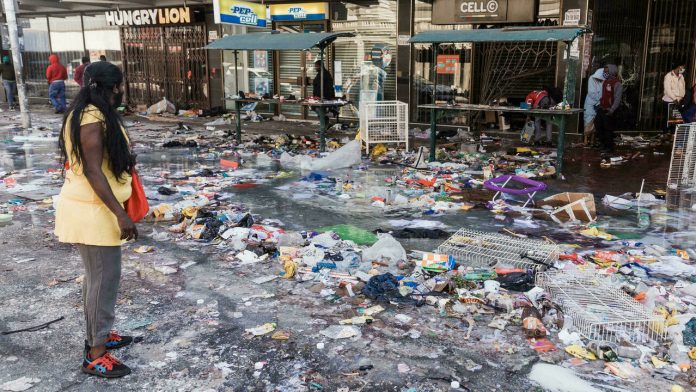 Riots in South Africa this month have claimed 337 lives, the government said on Thursday, marking a further rise in the death toll from 276 announced the previous day.

“South African police have revised the total number of deaths in Gauteng (province) to 79 and KwaZulu-Natal to 258 as a result of the unrest,” said Khumbudzo Ntshavheni, a minister in the president’s office.

She added that some of the latest deaths were from people who succumbed to injuries sustained during the riots.

Earlier this month, widespread looting and burning of businesses broke out, a day after ex-president Jacob Zuma began serving a 15-month prison sentence for ignoring a corruption investigation.

The violence escalated into the worst unrest since the end of apartheid, prompting President Cyril Ramaphosa to call it an attempted “insurgency”.

It has caused an estimated $3.4 billion in damage to date.

The violence spread through Zuma’s home provinces of KwaZulu-Natal and Gauteng, the two most populous provinces that together account for half of South Africa’s economic output.

Zuma was briefly released from prison in the southeastern city of Estcourt on Thursday to attend the funeral of his brother Michael, who died of illness just days after the ex-president was jailed.

Violence has abated and so far six people, including a radio DJ, have been arrested on charges of inciting public violence.

Several thousand more are being held for looting and arson.