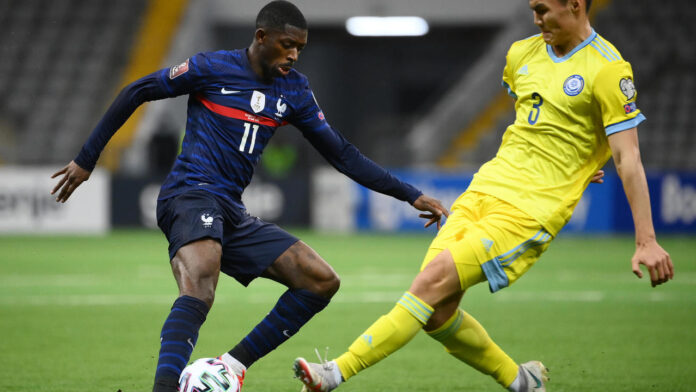 Ousmane Dembele inspired France to a 2-0 victory over Kazakhstan on Sunday in their second match in World Cup qualifying group D to mark a successful return to the world champions’ team.

Four days after being held 1-1 by Ukraine at the Stade de France, the French built their victory in the first half with Sergiy Malie’s own goal that added to Dembele’s opener before Kylian Mbappe missed a second half.

France topped the table with four points ahead of Bosnia, which they face on Wednesday, Ukraine and Finland.

Ukraine will host Finland later on Sunday. Kazakhstan have zero points after playing their first game in the promotion.

“The job is done. We could have scored more goals if we had been more clinical after the break,” said coach Didier Deschamps.

French midfielder Paul Pogba said Kazakhstan proved to be worthy opponents on an artificial pitch in a covered stadium.

“Kazakhstan never gave up. Everyone thought they would concede five goals but that was not the case at all,” he said.

Only captain Hugo Lloris and Antoine Griezmann remained from the team that started against Ukraine, with Barcelona’s forwards setting a new record of 45 starts in a row for Les Bleus.

It was Griezmann’s club mate Dembele who struck the deadlock for 20 minutes with a shot with his right foot after being put up by Anthony Martial after a defensive pass from Pogba.

Dembele returned to the French side as a replacement for the second half of the year against Ukraine, more than two years after his previous meeting in November 2018.

His third international goal from 23 matches, his first since a 3-1 friendly against Italy in June 2018, came as a welcome boost less than two months before coach Deschamps appointed his squad for this year’s European Championships.

“We know Ousmane can bring a lot to this team, he still needs to improve, we know that,” said Pogba. “I take him under my wings to raise him.”

Les Bleus doubled the lead at half-time when Maliy, who had just denied Martial, nodded a cross in his own net.

France were never threatened and had a great opportunity to add a third in the 76th minute, but Mbappe’s kick was saved by Aleksandr Mokin.

The Paris St Germain strike had another chance in the dying minutes, but was again denied by Mokin.