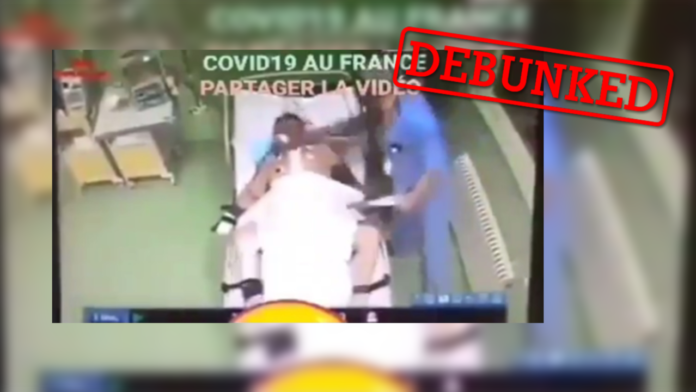 A surveillance camera video allegedly portraying a nurse beating a Covid-19 patient on oxygen at a French hospital has been circulating on social media. It turns out, however, that the brutal incident actually took place in Russia eight years ago.

A social media user contacted France 24’s verification team at @ InfoIntoxF24 to ask us to investigate the origin of this 45 second video, titled “Covid 19 in France, share the video”. It shows a patient in bed, connected to a respirator, who is hit several times by a medical staff.

An anxious social media user commented on the video in French.

“This person must be arrested because they make our country look bad,” he wrote. “We are welcomed here with open arms and see what is happening. We condemn this Machiavellian, satanic behavior that occurs in our hospitals.”

Where does this video come from?

The low-quality video has also been digitally modified, with text to the top. This makes it difficult to investigate with the normal process. However, we took a screenshot from the video, which shows the patient lying on his bed (without the text).

Then we ran that image through the Yandex search engine. We got two hits – both from the British media, The Sun and the Daily Mail.

Thanks to a search on Yandex to find British media articles on this video dating from 2014. © Yandex

It turns out that the incident took place in Russia in February 2013. The man in the blue scrubs, Andrey Votyakov, was the chief anesthesiologist at the Federal Center for Cardiovascular Surgery in Perm, Siberia. He said he lost his temper and abused his patient after working non-stop for 36 hours.

“As soon as I entered the room with my team, he started calling me various derogatory names. And I was just blown away by it, he said. “We had spent so much time on his very complicated case to help him recover, and he did not give a single word of gratitude.”

The video was shared by many media, including the Arabic-language SkyNews channel.

The patient in the video died in hospital not long after the incident, although it is unknown to what extent the assault was related to his death. However, the video was not released until July 2014, when the doctor was fired. He was sentenced to six months’ community service and a fine of 100,000 rubles [Editor’s note: 1,112 euros] 2015.