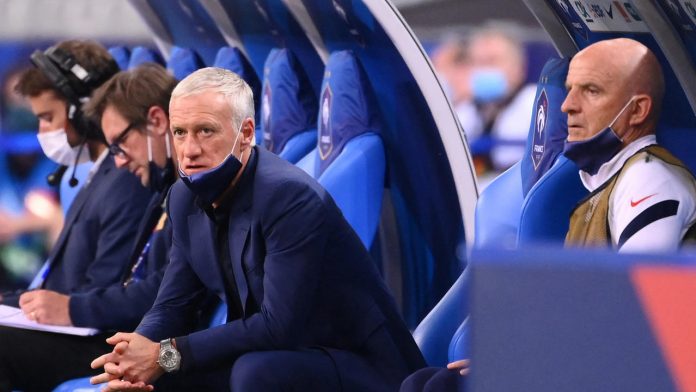 France will kick off their Euro 2021 campaign on June 15 with a tough showdown against Germany as they try to build on their 2018 World Cup triumph. It bodes well for Les Bleus fans that their longtime manager Didier Deschamps won’t just go to France. who famously led to victory, as well as captaining both the World Cup and Eurotrophies. Jowharlooks back on Deschamps’ brilliant career.

Deschamps stormed onto the scene as the defensive centerpiece of the renowned Marseille team that became the first – and so far only – French club to win the Champions League in 1993. At the age of 24, he became the youngest ever captain of his team. to the top prize of club football.

Deschamps took home trophies after moving to Juventus in 1994. In 1996 he again won the Champions League, as well as three Serie A titles, two Italian Super Cups and a Coppa Italia. and an equally diminished last season in Valencia.

It was Deschamps’ international playing career that earned him the place in the football pantheon – despite an unfavorable start as Les Bleus went through a quagmire of despondency and failed to qualify for the 1990 and 1994 World Cups while crashing from Euro 92 in the first round.

It looked like Les Bleus would pull himself out of the doldrums at Euro 96, centering the team around captain Eric Cantona, the most gifted striker of his generation. Then Cantona’s erratic temper exploded in 1995 when he kung fu kicked an opponent off the stands in response to an insult. The French talisman was suspended for a year.

This was Deschamps’ moment. Cantona had dismissed his defensive midfield skills as mere ‘water carrier’, tackling and intercepting to pass to strikers. But it was up to Deschamps that France’s manager at the time, Aimé Jacquet, turned his back when he tried to reform the side in Cantona’s absence. The focus shifted to younger talents such as Zinedine Zidane – and Jacquet chose Deschamps as captain to guide them. Les Bleus reached the semi-finals of Euro 96 – their best tournament performance in ten years.

Then came Deschamps’ greatest moment of glory, the 1998 World Cup. Tournament host France tore through the group stage and knockout rounds before beating the Brazilian favorites 3-0 in the final. Zidane was the star throughout, leading the diamond in midfield. Deschamps was the linchpin keeping the team together, blocking opponent’s maneuvers and pushing the French attack forward with incisive passes.

Deschamps played the same role – as the midfield centerpiece who boosted France’s play and the captain who boosted their morale – in Les Bleus’ victorious Euro 2000 campaign. By this point he had mastered the art of creating offensive momentum from deep in the field with impeccably timed and placed passes.

France faced a major setback in the group stage, losing to the formidable Dutch. But Deschamps played a key role in bringing together this young French squad – with new talents such as Thierry Henry and Sylvain Wiltord in their first international tournament – allowing them to beat Portugal in the semi-final and Italy in the final.

Deschamps retired from international play after this triumph made him the second football captain in history to win the Champions League, the World Cup and the European Championship, after Franz Beckenbauer.

Unlike some players who go into management at the top – including his former team-mate Zidane at Real Madrid – Deschamps started to make second-rate clubs rise above their weight. He took charge of Monaco, also a Ligue 1 at the time, in 2001. Under Deschamps they won the French League Cup in 2003, before a remarkable run to the Champions League final in 2004 – beating Real Madrid and Chelsea before Jose Mourinho’s Porto took the trophy in the final. Deschamps was honored as 2004 Ligue 1 Manager of the Year.

The former “water carrier” played a similar role at Juventus in 2006-07. A bribery scandal had briefly impoverished the Torinese titans and relegated them to the second tier of Italian football. Deschamps led them to Serie B victory before leaving after a falling out with the club’s management.

Deschamps returned to France in 2009 and took over at his former team Marseille. OM, as they’re known, had become a far cry from the world-conquering team of the early ’90s. But Deschamps won their first Ligue 1 title in eighteen years in 2010 – before taking them to their first Champions League quarter-final since their famous win in 1993 in 2012. That same year, OM won their third consecutive French League Cup. However, their Ligue 1 performance faltered as they finished 10th and Deschamps resigned.

Deschamps ran out of contract at the right time. Laurent Blanc resigned as manager of Les Bleus after Euro 2012. The 2010 World Cup debacle still cast a shadow over French football – and Deschamps displaced it by moving Les Bleus to another generation, shifting the squad around players like Antoine Griezmann and Paul Pogba turned. France reached the quarter-finals, only stopped by eventual champions Germany.

Euro 2016 brought France closer to their former glory. On home soil, Les Bleus romp through the group stage and knockout rounds – including impeccably executed revenge on Germany in the semi-final, wearing a Griezmann brace. But Deschamps’ France lacked that killer instinct on the big occasion, losing 1-0 to Portugal in extra time, in a nerve-wracking final akin to Bayern Munich’s 2020 Champions League win over PSG.

Two years later, at the 2018 World Cup, it initially seemed that this lack of killer instinct had set in earlier. Slowly and cautiously in the group stage, France took thin victories over minnows Australia and Peru before settling for a goalless draw against Denmark.

But once France entered the group stage, Deschamps’ tactics suddenly became the special sauce needed to make the French attack work. Notably, his controversial choice to place two defensive midfielders – N’Golo Kante and Blaise Matuidi – on either side of box-to-box midfielder Paul Pogba in a three-man midfield made for some sloppy play in the group stage.

Then, in the knockout rounds, the presence of these two presenters freed Pogba to become the transformative midfielder he never quite became for Manchester United. In fact, the defensive acumen and shrewd positioning of Kanté and Matuidi freed French prodigy Kylian Mbappé to unleash his youthful energy and creativity, making him the World Cup breakout star.

These factors helped France take down some of the most dynamic teams in the modern international game, past Lionel Messi’s Argentina, Luis Suarez’s Argentina and Eden Hazard’s Belgium – before beating the devilishly effective wildcard of the tournament Croatia 4-2 in the final. . Deschamps’ controversial tactical approach was given the highest justification.

This time, the former ‘water carrier’ of French football has made an even more controversial choice. Before the 2018 World Cup, Deschamps said he “selected only players who could gel as a cohesive unit”. That meant that Karim Benzema was still out. Deschamps had him banned from Euro 2016 for his alleged role in a blackmail scandal. At the time, Benzema, who is of Algerian descent, accused Deschamps of “bowing to a racist part of France”. Deschamps dismissed the accusation, recently telling reporters that he “hasn’t forgotten” what Benzema said. But the 33-year-old striker is on the French Euro 2021 team sheet.

Benzema scored 192 goals in 383 appearances for Real Madrid. But Deschamps’ squad showed they are a formidable force even without Benzema in Tuesday’s pre-Euro exercise against Bulgaria. France dominated the game and won 3-0. Griezmann scored the first goal – and like Pogba, Kante and goalkeeper Hugo Lloris, his presence as a veteran of the 2018 World Cup victory shows why many pundits see France as the favorites to win Euro 2021.

Benzema took off injured in the 39th minute. Olivier Giroud – who had little playing time for Chelsea last season and was compared to a ‘go-kart’ by Benzema last year – replaced him and scored two late goals with superb skill.