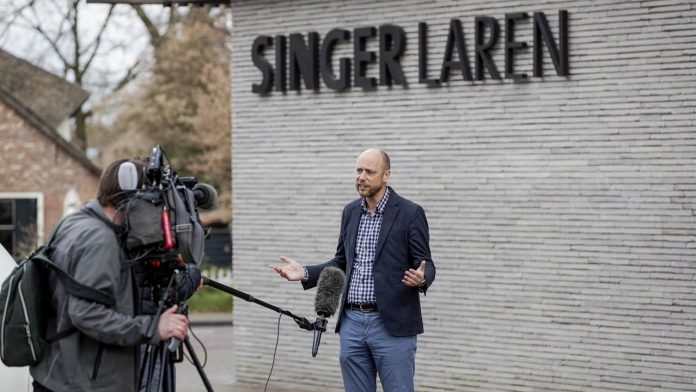 Dutch police arrested a 58-year-old man on Tuesday, suspected of stealing two paintings by Vincent van Gogh and Frans Hals from small museums, and said it brought them closer to regaining both masterpieces.

The man was kept at home in central Baarn during last year’s thefts of Van Gogh’s work “Parsonage Garden at Nuenen in Spring” from 1884, and the painter from the 17th century Hals “Two Laughing Boys”.

Police said they have not yet found any of the paintings – Van Gogh is valued at up to six million euros ($ 6.6 million) – but the arrest was an “important step” in the investigation.

“For several months, intensive investigations into the robbery were carried out on both paintings under the leadership of the prosecutor’s office,” said a Dutch police statement.

“This has led to the arrest of a 58-year-old suspect from Baarn. He was arrested at home this morning. The man is suspected of stealing the paintings.”

The Van Gogh painting was stolen from the Singer Laren Museum near Amsterdam just over a year ago on March 30, 2020, while it was closed due to coronavirus measures.

It is about ten kilometers from Baarn where the suspect was arrested.

The “two laughing boys” of Hals were taken in August from the museum Hofje van Mevrouw van Aerden in Leerdam.

Dutch art detective Arthur Brand, nicknamed “Indiana Jones of the Art World” for finding a number of lost paintings, praised the news of the arrest.

Breaking: Another great success for Dutch police. This morning, a suspect was arrested in connection with the theft of the Van Gogh painting “Lentetuin” in the Netherlands last year. The plot thickens … pic.twitter.com/StsngPiyrS

It was Brand who, two months after the theft of Van Gogh, received two “proofs of life” pictures of the painting.

The Singer Laren Museum said it hoped the arrest would lead to the “beautiful work” being recovered from the Groninger Museum in the Netherlands.

“Compliments to the police for their investigative work. No one may break in with impunity”, says CEO Evert van Os in a statement.

“I really hope that this arrest will lead the police to the painting in the short term … It has now been a year since the burglary took place and every day we hope for the good news.”

Hofje van Mevrouw van Aerden said on her Facebook that there was now “some hope” of getting the Hals painting back.

The police statement says that “both paintings have not yet resurfaced with this arrest. The search continues without interruption.”

“This arrest is an important step in the investigation. If you have information and have not yet shared it with the police, do so,” it added.

“Parsonage Garden” dates from early in Van Gogh’s career before the prolific artist began with his brand of post-impressionist paintings such as “Sunflowers” and his vivid self-portraits.

The theft happened on what would have been his 167th birthday.

The neck painting, with two laughing boys with a mug of beer, had previously been stolen twice before from the Hofje van Mevrouw van Aerden Museum in 2011 and 1988.

It recovered after six months and three years, respectively.

Hals, a contemporary of co-masters Rembrandt and Vermeer, is best known for works including “The Laughing Cavalier”, which hangs in the Wallace Collection in London, and “The Gypsy Girl”, now housed in the Louvre in Paris.

Van Gogh’s work has been a frequent target for crime.

Two Van Gogh masterpieces were shown back at Amsterdam’s Van Gogh Museum two years ago after being stolen from there in 2002.

The paintings – 1882 “The view of the sea at Scheveningen” and 1884/5 “The congregation leaves the Reformed church in Nuenen” – were recovered from a home belonging to a mafia drug baron near Naples 2016.

Earlier, three Van Goghs who had been stolen from the Noordbrabants Museum in 1990 resurfaced when a notorious Dutch criminal made a deal with prosecutors.