Home WORLD NEWS Ecuadorians are considering returning to socialism in a vote for a new...
Facebook
Twitter
WhatsApp
Linkedin
LINE 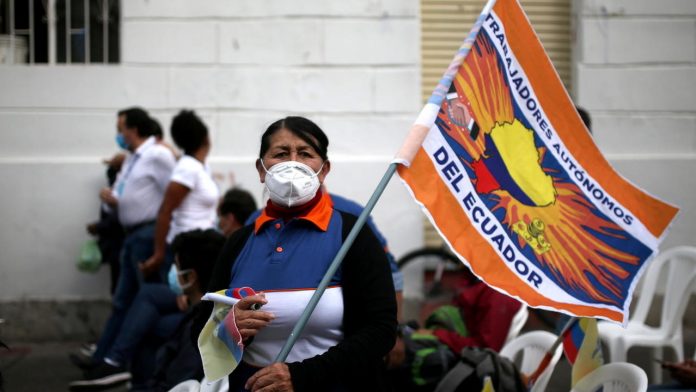 Ecuadorians voted on Sunday to choose between a young, socialist protector of former leader Rafael Correa and a veteran conservative as their new president, with the oil-rich country caught up in an economic crisis exacerbated by the Covid-19 pandemic.

Opinion polls had the two challengers neck and neck in the fight for control of the country of 17.4 million.

Economist Andres Arauz, 36, is virtually unknown but topped the first ballot in February with the support of his mentor, Correa, who led the country from 2007-2017.

“This is our opportunity to leave the past, to leave this pain, this suffering, this exclusion that we have experienced recently and to move to a truly humane government, one that loves its people,” Arauz said as he followed a voter in the capital, Quito.

Arauz himself did not vote on Sunday because he is still registered in Mexico where he studied for a doctorate before deciding to run in the election.

Ex-banker Guillermo Lasso, 65, is an experienced politician and the third time presidential candidate after finishing second twice: to Correa in 2013 and Lenin Moreno in 2017.

“I invite you to give us an opportunity to serve you … because with humility I say: I will give my life for the people,” Lasso said as he voted in Ecuador’s largest city, Guayaquil, the country’s economic hub.

Polls closed at 5pm (2200 GMT) after ten hours of mandatory voting for 13.1 million people in the South American country of the winding Pacific coast and the Andean highlands sinking into the tropical lowlands of the Amazon Basin.

There were no questions about the congestion of voters, as the National Electoral Council said before the voting closed.

The first results are expected around 0000 GMT.

The winner will take over from the besieged Moreno on May 24 and will immediately face an economic crisis exacerbated by a 7.8 percent reduction in GDP by 2020.

At the same time, the country has been hit hard by the pandemic with hospitals overwhelmed by more than 340,000 coronavirus infections and over 17,000 deaths.

Arauz, the candidate of the Union of Hope coalition, topped the first round with almost 33 percent of the vote, about 13 percentage points ahead of Lasso, from the Creating Opportunities movement.

Correa would have been his ruling buddy but for an eight-year conviction for corruption.

“If Arauz wins, Correa-style will continue. If Lasso wins, we will end all of this immediately … which has been a terrible situation for several years,” Judith Viteri, 41, who works in chemistry, told AFP after have voted. .

Correa lives in exile in Belgium, where his wife was born, and he can avoid his prison sentence. But his influence on Ecuadorian politics is still strong.

The latest poll from Market predicted a “technical draw” on Sunday with Arauz receiving 50 percent and Lasso receiving 49 percent.

Lasso scraped into the drain by less than half a percentage point ahead of domestic candidate Yaku Perez, who questioned the outcome and claimed he had been the victim of fraud.

It took weeks for Lasso’s second place to be confirmed. Prior to the runoff, election officials decided to abandon the usual quick count to avoid potentially misleading results.

The socialist Perez, whose domestic movement in Pachakutik is the second largest bloc in the legislature, took up about 20 percent of the vote in the first round.

Pachakutik has refused to support any of the candidates in the second round.

“This social division, as the campaign highlighted, means that the vote to effectively reject Correa goes to Lasso,” said Pablo Romero, an analyst at Salesiana University.

Political scientist Santiago Basabe, from the Latin American Faculty of Social Sciences, believes that Arauz has the edge.

“While either can win, it seems Arauz has a better chance,” said Basabe.

Still, “there is a feeling that to some extent it does not matter who wins, we just need an immediate change,” says Romero.

Should Lasso win, he would face a tough job with Arauz’s left-wing coalition.

“There will be permanent tension with the CEO. There is almost no chance that the reforms the country needs,” Romero said.