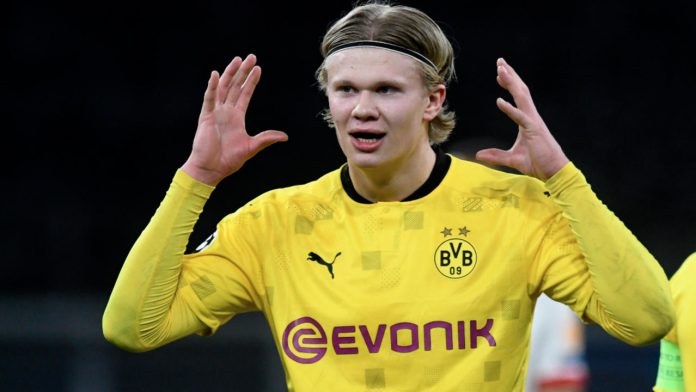 Embattled Borusssia Dortmund host Manchester City away in Tuesday’s Champions League quarter-final, first stage, amid speculation about the future of their striker Erling Braut Haaland and harsh criticism from their own CEO.

“It’s justified. We have to deliver on the pitch and have failed too often,” Emre Can told reporters on Monday after CEO Hans-Joachim Watzke was “disappointed by the measure” of Dortmund’s performance in Saturday’s 2-1 secret Bundesliga defeat. of Frankfurt.

The result was a serious setback for Dortmund, who are now seven points from next season’s Champions League places and risk missing the qualifiers for the first time in six years.

Dortmund defender Can said it was up to the players to show a reaction at the Etihad Stadium against Pep Guardiola’s Premier League leaders with the return match in Dortmund on April 14.

“We can do better and we will do it, tomorrow is a good day to show a reaction,” Can insisted.

“We definitely have to be brave and try to move the ball well.”

Dortmund miss the English winger Jadon Sancho, who has remained in Germany to receive treatment for a leg injury, but the spotlight will be on the German club’s striker Haaland.

Dortmund signed for just 20 million euros (24 million dollars) in January 2020 and want 180 million euros for Haaland, who has scored 33 goals in 32 games this season.

Speculation that the Norwegian striker leaves at the end of the season has been driven by his agent Mino Raiola and father Alf-Inge Haaland who meet with club officials from Barcelona and Real Madrid.

City are also said to be interested in replacing Sergio Aguero, whose contract expires in July.

Haaland’s Dortmund contract runs until 2024 and an exit clause – reportedly for around EUR 75 million – only applies to 2022.

Watzke insists that Dortmund want to keep Haaland at all costs, “there is no plan B”.

Head coach Edin Terzic brushed off questions on Monday, insisting that they were only “happy to have Haaland back and he seemed happy to see us again” after international duty to Norway.

Still, speculation seems to have had a toll on the 20-year-old who failed to score in three games for Norway and Dortmund’s loss to Frankfurt.

His teammates are aware that Haaland’s days in Dortmund may be numbered.