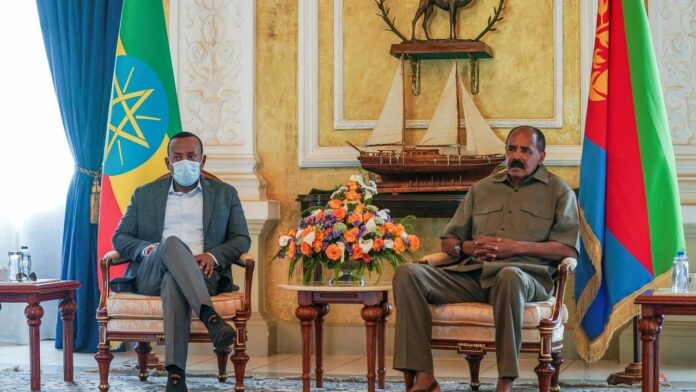 A few days after Ethiopian Prime Minister Abiy Ahmed finally acknowledged that Eritrean troops were in Tigray after months of denial, the Nobel Peace Prize winner said on Friday that they would withdraw from Ethiopia. But the fantastic announcements did not give a word about military or political resolutions to a deep crisis and the devil lies in these details.

It was an extraordinary news week in Ethiopia. On Monday, troops from the neighboring Eritrea were not officially present on Ethiopian soil. For several months, the Ethiopian government simply denied the involvement of Eritrean troops in the deadly conflict in northern Tigray province.

But on Tuesday, March 23, it was suddenly official: Eritrean troops were indeed present on Ethiopian soil. After five months of denials, Ethiopian Prime Minister Abiy Ahmed acknowledged that the Eritrean Defense Forces had crossed the border to join the offensive against the Tigray People’s Liberation Front (TPLF).

The country’s Nobel Peace Prize laureate spoke to parliamentarians who stood in front of pandemic worms and acknowledged that human rights violations had been committed during the conflict, but he omitted all official remorse.

On Friday morning, Abiy announced that the Eritrean troops who were not officially present on Monday would withdraw from Tigray.

In a statement posted on Twitter a day after Abiy’s arrival in the Eritrean capital Asmara to meet with Eritrean President Isaias Afwerki, the Ethiopian leader said: “The Eritrean government has agreed to withdraw its forces from the Ethiopian border.”

And just like that, everything would be fine, Abiy’s statement suggested. “We will continue to build on the spirit of trust and good neighborliness between our two countries,” the Ethiopian leader said.

The presence of Eritrean forces in Tigray – where witnesses have described them as looting, killing and raping civilians – has been a thorny issue in Ethiopia since November, when Abiy sent federal troops to the northern region.

“A controversial aspect is that there has been complete denial of the Eritrean role in the conflict and the federal government actually said that all reports to the contrary were disinformation,” said William Davison, senior analyst for Ethiopia at the Brussels-based International Crisis Group, in an interview with FRANCE 24. “But even worse has been the conduct of the Eritrean troops, who have systematically plundered private and public property and committed atrocities against civilians in Tigray.”

The military operation in Tigray began on November 4 after the Abiy administration accused the TPLF of attacks on Ethiopian army camps in the northern region. It marked the beginning of a complete confrontation between the administration in Addis Ababa and the TPLF, a political party with an armed wing that dominated Ethiopian politics for almost three decades before Abiy – Ethiopia’s first ethnic Oromo prime minister – took office in 2018.

The exact toll of the recent Tigray conflict is still unknown, as the region of about 6 million people has been largely cut off from the world despite recent advances in access to humanitarian teams. Last month, three Tigrayan opposition parties claimed at least 52,000 people had been killed in the conflict since November. But the Ethiopian prime minister’s office rejected the claim, warning that “enemies of the state” were spreading misinformation.

The US senator is visiting Addis Ababa

Coons, a member of the Senate Foreign Relations Committee, was commissioned by the Biden administration to “convey President Biden’s serious concerns about the humanitarian crisis and human rights violations in the Tigray region and the risk of broader instability in the Horn of Africa.” , according to a statement from US Security Adviser Jake Sullivan.

The influential US senator’s visit was widely seen as a sign of Washington’s reunification in the Horn of Africa – especially in democratic affairs and human rights – following the Trump administration’s lack of interest in the region.

However, when he returned to Washington, the Coons acknowledged that during his talks, Abiy maintained a tough position in a recently reported US government report, concluding that the Ethiopian government was conducting “a systematic campaign for ethnic cleansing” in Tigray.

“He pushed really hard against every attempt by me to characterize this as an ethnic conflict and insisted that it was a conflict against the TPLF as a political actor and a political party that had engaged in an attack on federal forces,” Coons said to journalists in Washington.

Abiy’s admission to parliament came on the day when the independent Ethiopian Human Rights Commission released a report on the November 2020 massacre of more than 100 civilians by Eritrean troops in the Tigray city of Axum. The report confirmed the findings of Amnesty International and Human Rights Watch and concluded that the massacre could be a crime against humanity.

The combination of international and domestic development made it “unsustainable for Addis to continue to deny Eritrean participation in the conflict. It seems that the pressure from the US, the EU and other donors contributed to the transition from Abiy, “Davison explained.

Eritrean troops deep inside the Tigray

In his brief statement on the forthcoming Eritrean withdrawal, Abiy noted that “the Eritrean government has agreed to withdraw its forces from the Ethiopian border. Ethiopia’s national defense force is taking over immediately to guard the border areas. “

But a report from Addis Ababa, Maria Gerth-Niculescu, FRANCE 24, sounded a cautionary note: beyond the border areas, that they are present throughout the region. ”

Five months after Eritrean forces entered Ethiopia from northern Tigray, they have since expanded their presence to central, southern and southeastern Tigray. While Ethiopian government forces control Tigray’s towns, cities and major roads, Eritrean troops are located in rural areas, according to witnesses.

“In terms of conflict dynamics, if there is a complete withdrawal of Eritrean troops, it would reduce the pressure on the TPLF, and the Ethiopian military may not be able to defeat Tigray’s resistance without Eritrean support,” Davison said.

The TPLF was a significant fighting force during Ethiopia’s decades-long civil war, which ended in 1991 with a coalition of rebel groups, including the TPLF, which rejected a brutal communist dictatorship. It remained a major political power in Ethiopia until tensions between the group and the Abiy administration escalated in recent years.

Amid growing tensions over budgets and federal powers, the TPLF has increased its recruitment drive over the past two years. Since the military campaign in November, most of the movement’s leaders have gone underground.

Tigrayan opposition party Salsay Weyane Tigray said on Friday that any agreement on Eritrean’s withdrawal would be “useless” without “an international regulator to control”.

“It’s another level of fraud; a game they have been playing for a long time “, says Hailu Kebede, head of the party’s foreign affairs department, on Twitter. “Pull out all forces and set up an international observatory. The world must not be deceived again.”

In the absence of an international regulatory body to monitor, insure and monitor the withdrawal of Eritrean and Amhara forces from Tigray; statements or agreements of any kind for such activities are useless.

Eritrean troops deep inside the Tigray

During his meeting with Senator Coons over the weekend, Abiy rejected the US demand for a unilateral ceasefire in Tigray.

Coons told reporters that he pressured Abiy during both days of their March 20 and 21 meetings to declare a ceasefire, but Abiy declined and argued that the fighting had largely ceased and that the situation then constituted “a law enforcement operation in which they conduct some TPLFs”. -leader “.

“So his response was that a ceasefire is not necessary,” Coons said, describing it as “a persistent disagreement” between them.

Abiy insists on trying to deal with the Tigray situation solely by military and legal means failing to address the fundamental political causes of the crisis, according to Davison. “It was divisive political disagreement that led to the war,” he said. “Addressing the dispute is the key to ending the conflict, but so far there has been no indication that Abiy is willing to continue such talks, although that is what is needed to prevent further suffering and destabilization.”