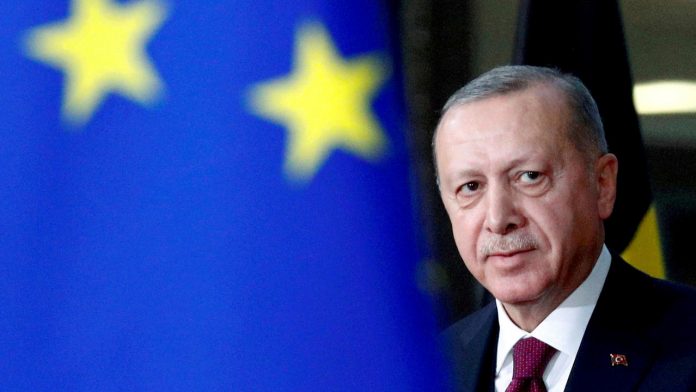 Many years of disagreement over a growing list of issues threatened to boil over last summer when Turkey sent naval vessels to support an energy exploration mission in waters, as EU members Cyprus and Greece claim.

Tensions cooled somewhat when Turkey withdrew its ships and this year began its first shipping talks with Greece since 2016.

The bloc withdrew from its threat to sanction Turkey as a result.

The Turks say they want to move on from “positive” talks held in a series of talks to “concrete measures” – especially when it comes to migration.

But EU officials warn that any improvement depends on how Erdogan – who was a leader when Turkey formally launched talks to join the bloc in 2005 – acts and whether he remains a constructive partner.

The possible thaw coincides with a toughening of Turkey from the White House, where the election of President Joe Biden saw Erdogan lose a personal friend of Donald Trump.

In a “carrot-and-stick” strategy, the EU is dangling the possibility of updating the sides’ customs union, visa liberalization, giving more money to refugees and increasing dialogue with Turkey on several fronts.

But an EU official insisted that Tuesday’s meeting “will not be a moment of negotiation” but rather a chance for the sides to present their terms for improved ties.

The meeting comes on the heels of Turkey’s withdrawal last month from a treaty fighting violence against women and the launch of a formal attempt to close the country’s main pro – Kurdish party.

Although Brussels condemned both decisions, EU leaders last month reiterated their commitment to work with Turkey if the “current scale is maintained”.

Both sides have lists of complaints they want to address.

A Turkish diplomatic source told AFP that Ankara expects the modernization of the customs union in 1995 and greater emphasis on Turkey’s candidacy status to join the EU.

The source added that Turkey wanted to update its migration agreement from 2016, where the bloc promised billions of euros in exchange for Turkey exercising control over the flow of migrants and refugees to Europe.

Turkey is home to almost four million refugees and migrants, the majority of whom are Syrian.

“The EU has not yet fully met its commitments for the deal, in particular its financial debts,” the source said, adding that only € 3.7 billion ($ 4.4 billion) of the promised € 6 billion had reached Turkey.

Brussels accuses Ankara of failing to comply with its commitment to return migrants arriving in Europe but whose asylum applications fail.

Ilke Toygur, an analyst at the German Institute for International and Security Affairs, said Turkey wanted a deal with the bloc, “to keep its options open”.

The Turkish government sees a “more multipolar, more fragmented” world with the declining influence of the West, Toygur said in a podcast for his think tank, adding: “Turkey sees this as an opportunity to also diversify its allies.”

Turkey’s increasingly self-adhesive foreign policy has been an important source of EU-Turkey pressure.

These escalated over Turkish support for Azerbaijan during a war in Nagorno-Karabakh last year against Armenia and Ankara’s military support for Libya.

But with ceasefires agreed in these conflicts, the sides are now focusing on UN-led exploratory talks on the fragmented island of Cyprus scheduled for later this month.

Cyprus has been a thorn in the side of relations since 1974, when Turkey occupied the northern third of the island in response to a coup orchestrated by the military junta then in power in Athens in order to annex the island to Greece.