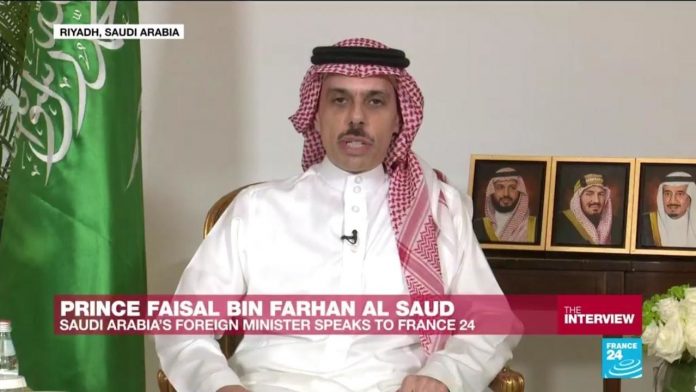 Saudi Arabia’s foreign minister told Jowharon Sunday that the kingdom fully supported King Abdullah II of Jordan after Jordanian authorities claimed they had destroyed a “harmful conspiracy” with a former crown prince who had had contact with unspecified “foreign parties”.

In an exclusive interview, Prince Faisal bin Farhan Al Saud refused to speculate on which foreign parties were involved in the alleged plan, although he warned that any external interference in Jordan’s affairs was “unacceptable”.

“We stand firm in our support for His Majesty [King Abdullah II] and the people of Jordan in their efforts to ensure the security and stability of both Jordan and the region, “said the Saudi Foreign Minister.

Regarding talks next week on the Iranian nuclear deal, Prince Faisal said Saudi Arabia had been assured that any new deal would be more demanding for Iran in terms of its ballistic missile capabilities and its support for armed groups in the region.

“We are convinced that the international community will work hard to ensure that the shortcomings in [2015 nuclear accord] will eventually be addressed and they will also address the regional instability caused by Iran’s activities, he said.

Prince Faisal said there were no direct channels between Saudi Arabia and Iran, but that Saudi Arabia was ready to talk “if Iran changes its behavior”.

Regarding the war in Yemen, Saudi Arabia’s top diplomat said that a ceasefire proposal remains on the table despite a new Houthi offensive against the Saudi Yemeni government and continued strikes on Saudi territory.

Prince Faisal also reiterated the Saudi position that normalization of ties with Israel would only be possible after a peace deal between Israel and the Palestinians.

Reports in November that Israeli Prime Minister Benjamin Netanyahu was holding secret talks in Saudi Arabia gave rise to speculation that a normalization consistent with the Gulf’s top power may be in the offing.

However, Prince Faisal denied that the meeting had taken place.