Home WORLD NEWS Following the report, the WHO chief calls for a deeper investigation of...
Facebook
Twitter
WhatsApp
Linkedin
LINE 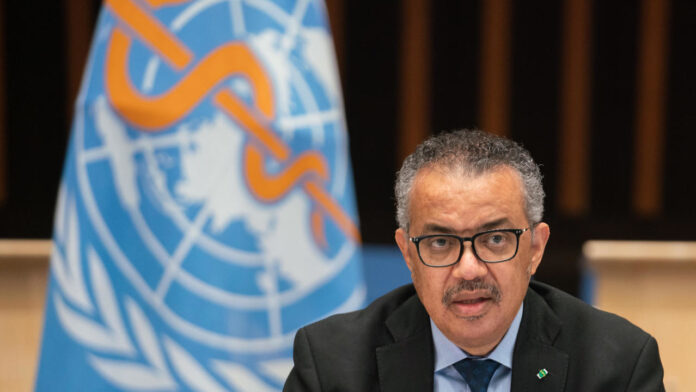 The head of the World Health Organization, Tedros Adhanom Ghebreyesus, on Tuesday called for a deeper investigation into whether the coronavirus outbreak stemmed from a leak from a laboratory, as world leaders pushed for a treaty to prepare for future pandemics.

A report by WHO and Chinese experts, published on Tuesday, judged that the lab leak hypothesis was highly unlikely and said that the virus behind Covid-19 had probably jumped from bats to humans via an intermediate animal.

He added that the international team had difficulty accessing raw data during the mission to China and demanded “faster and more comprehensive data sharing” in the future.

In a statement with 13 allies including Australia, Britain, Canada, Japan and South Korea, the United States expressed concern over the report, saying the mission to China “was significantly delayed and lacked access to complete, original data and samples”.

“It is crucial for independent experts to have full access to all relevant human, animal and environmental data, research and personnel involved in the early stages of the outbreak that are relevant to determining the occurrence of this pandemic,” the statement said without explicitly criticize China. .

“We share these concerns not only to learn all we can about the origins of this pandemic, but also to pave the way for a rapid, transparent, evidence-based process for the next phase of this study as well as for the next health crisis,” it said. .

The other nations that signed the joint declaration were the Czech Republic, Denmark, Estonia, Israel, Latvia, Lithuania, Norway and Slovenia.

Members of the international team that wrote the report said on Tuesday that it was only a “first start” and more needed to be done.

They appealed for patience as the information continued to flow in. The team emphasized that hypotheses, including a possible laboratory leak, could not be completely ruled out.

WHO team leader Peter Ben Embarek said international team members were facing political pressure from “all sides”, but insisted “We were never pressured to remove critical elements from our report.” He also pointed to “integrity issues” in China that prevented the sharing of certain information and said that such restrictions would exist in many countries.

The report was released more than a year into the pandemic that has killed nearly 2.8 million people worldwide, with several countries battling new waves of infection.

Before the release of world leaders, they called for a new international treaty to better combat future pandemics and for countries to be ready for – or when – another hit.

“Together, we must be better prepared to predict, prevent, detect, assess and effectively respond to pandemics in a highly coordinated manner,” they urged.

The call came in a joint article published in international newspapers on Tuesday, written by leaders from more than 20 countries – including Germany, France, South Korea and South Africa – along with the European Union and the WHO.

Tedros had previously urged the world not to waste any time preparing for the next report.

“The time to act is now. The world can not afford to wait until the pandemic is over to start planning for the next, the world health chief said at a virtual press conference.

The expert report on the origins of Covid-19 has had a troubled birth, with publication delays increasing the detentions and diplomatic strife that plagued the WHO’s attempt to get experts into Wuhan City – the center of the first outbreak.

They finally arrived on January 14, more than a year after the first cases appeared.

The authors of the report judged that the most likely scenario was that the virus had taken a direct step towards humans, without ruling out other theories.

Beijing’s theory that the virus does not originate in China at all but was imported into frozen foods was considered “possible” but highly unlikely.

Allegations by former US President Donald Trump’s administration that the virus escaped from a research laboratory were considered “extremely unlikely”.

He called for a “new debt mechanism” that enabled options such as debt swaps, repurchases and cancellations to help worse countries.

To an online forum that included dozens of world leaders, he said the pandemic had pushed the world to the “limit of a debt crisis” and called for “urgent action”.

“We have to change the rules,” he argued.

More than a year into the pandemic, several countries are struggling with new waves of the virus, which is getting a squeeze to contain outbreaks of new antivirus measures.

Italy said on Tuesday it would impose a five-day quarantine on travelers arriving from other EU countries, while Germany will increase border controls to ensure that arriving people have negative Covid tests.

Local authorities in the German capital Berlin and Munich again suspended injections of the AstraZeneca jab in the 1960s due to new reports of rare blood clots among the recipients, but called it a “precautionary measure”.

In France, hospitals were under pressure after partial regional shutdowns failed to keep the number of people in intensive care below their second wave peak.

And in Slovakia, Prime Minister Igor Matovic resigned for his handling of the pandemic.

In Papua New Guinea, a sports center was transformed into a makeshift hospital to cope with fluctuating coronavirus infections in the poor nation.

The lack of nurses and doctors strained another system under stress.

“The system is under load,” he added. “It puts them under enormous strain.”