Home WORLD NEWS For French film buffs, the appeal of the silver screen is not...
Facebook
Twitter
WhatsApp
Linkedin
LINE 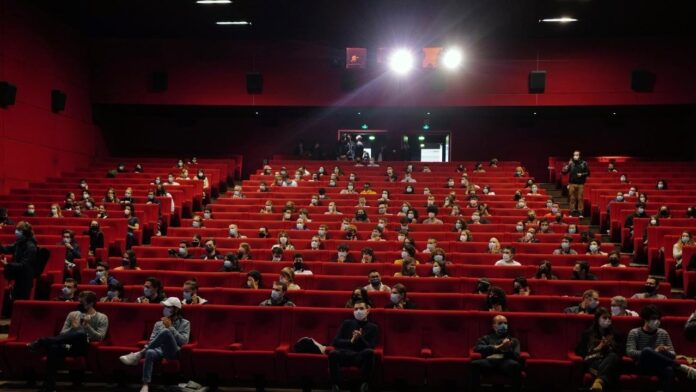 French moviegoers raced to their treasured cinemas on Wednesday after a six-month shutdown, sparking hopes for a brighter future for the big screen, despite a boom in movie streaming during the Covid-19 pandemic. Some movie buffs started queuing at 6am to get their fix.

The seven-month wait for “Demon Slayer” ended exactly as Amadou had hoped, with 800 fellow fans of the Japanese manga cheering and screeching in front of the biggest silver screen in town.

“Boy, did I need this, after all we’ve been through,” the 28-year-old nurse shouted outside the Grand Rex cinema in Paris, his voice still rippling with excitement.

Demon Slayer, which first came out last fall, was delayed when France entered a second nationwide lockdown in October. When sales finally opened earlier this week, the rush for tickets caused the Grand Rex’s website to crash several times.

Amadou and his friends were among the lucky ones to get seats for Wednesday’s grand reopening, 203 days after the pandemic ended a long winter of discontent.

“It had to be today, it had to be the primetime screening – we’ve had enough of waiting,” said 24-year-old Najette. “I have all the streaming platforms at home, but it’s a completely different sensation in the cinema.”

Across France, starving movie buffs flocked to cinemas on Wednesday as cultural venues were finally allowed to reopen at partial capacity after a protracted shutdown.

The flow of spectators has been a boon to a cherished but battered industry, which saw spectator numbers drop by 70 percent last year as a result of consecutive lockdowns. Ahead of the reopening, concerned movie owners had warned they would be struggling with a 35 percent capacity cap and a 9pm nationwide curfew, depriving them of all-important late-night screenings.

In Saint-Etienne, southwest of Lyon, there was a long queue outside the Méliès cinema as early as 6am, while early risers formed similar lines in Paris cinemas. Among them was 17-year-old Luce, who showed up “not so much for the movie as for the atmosphere, the big screen, that dull feeling when you step outside at the end”.

At the UGC Les Halles multiplex in central Paris, Europe’s busiest cinema, executives hailed a “colossal success” as they reported a record-breaking influx on Wednesday morning, despite the 35 percent cap. At 9:30 am, more than 1,000 tickets had been sold at what is arguably the region’s largest melting pot, with 27 screens catering to a diverse audience from both central Paris and its far-flung suburbs.

Among the numerous screenings that were sold out was the premiere of “Garçon chiffon”, a directorial debut for “Call My Agent!” actor Nicolas Maury, who almost burst into tears as he thanked the audience for coming.

Across the boulevard from the Grand Rex, another iconic cinema – the Max Linder Panorama – had a packed house Wednesday night for “Mandibules”, the latest surreal comedy by French director Quentin Dupieux, who attended the screening with the cast.

“It was heartening to see so many people appear,” said Willy Fonrose, head of Max Linder, highlighting the contrast to France’s first exit from the lockdown nearly a year ago, when many cinemas struggled to get films.

“At the time, wary film distributors had little to offer us. But now we have an abundance of choice – and longer delays have increased the appetite for movies, ”he said.

No time to dine

The more than 2,000 French cinemas reopen amid an unprecedented backlog of films, including both international hits and the products of the country’s own prolific film industry, which continued to produce films during the lockdown.

As a result, new films are now crowding for space on the silver screen next to autumn releases that have been cut short. The latter include Thomas Vinterberg’s “Another Round” starring Mads Mikkelsen, who has since won an Oscar for best foreign film.

Other Oscar winners to catch up include Best Picture Winner “Nomadland”, whose lead actress Frances McDormand gave a passionate speech in support of movie theaters when she picked up her Best Actress statuette and begged viewers for the film “at the biggest screen “. possible “.

Long-delayed Hollywood blockbusters will also be competing soon, including superhero snails “Black Widow” and “The Suicide Squad”, followed in October by the latest installment in the James Bond franchise, “No Time to Die”.

The abundance of films is a major concern for smaller independent works, which are in danger of being lost in the flood. It’s also a mixed boon for movie owners, who are already struggling with sanitation protocols, reduced capacity, and curfews.

And then there’s the added challenge of competing against another favorite pastime of the French: drinking, eating and socializing on sidewalk cafes, which also reopened on Wednesdays after their longest-ever shutdown.

>> Sipping in the rain, Parisians flock to beloved cafes after the closure of Covid-19

Filmgoers can enjoy both options at Studio 28, the iconic family-run cinema on the streets of Montmartre, which has its own small bar and outdoor patio, primarily aimed at a local – and loyal – audience.

“It’s great to see the joy and relief on people’s faces when they come back after all this time,” said Alain Roulleau, the cinema owner. “But let’s not forget that we lost an entire year of our lives – and it will be several months before things return to normal.”

For the current plethora of movies, Roulleau had to compete with distributors to make sure he had enough movies to open on Wednesday – underscoring the uneven competition between the big cinema chains and smaller, independent establishments like his.

Still, the owner of Studio 28 is confident that French cinemas will weather the Covid-19 storm, “provided they guarantee quality service so that spectators can taste – and not eat – celluloid”.

Nor is he overly concerned about the competition from the streaming services that have been boosted by successive lockdowns.

“People are eager to get off their couch and go outside,” he said. “Those who loved cinemas before the pandemic will be back for the big screen.”